Have An Orgasm For Jesus With Teresa Of Avila's Chess Apple Pie! 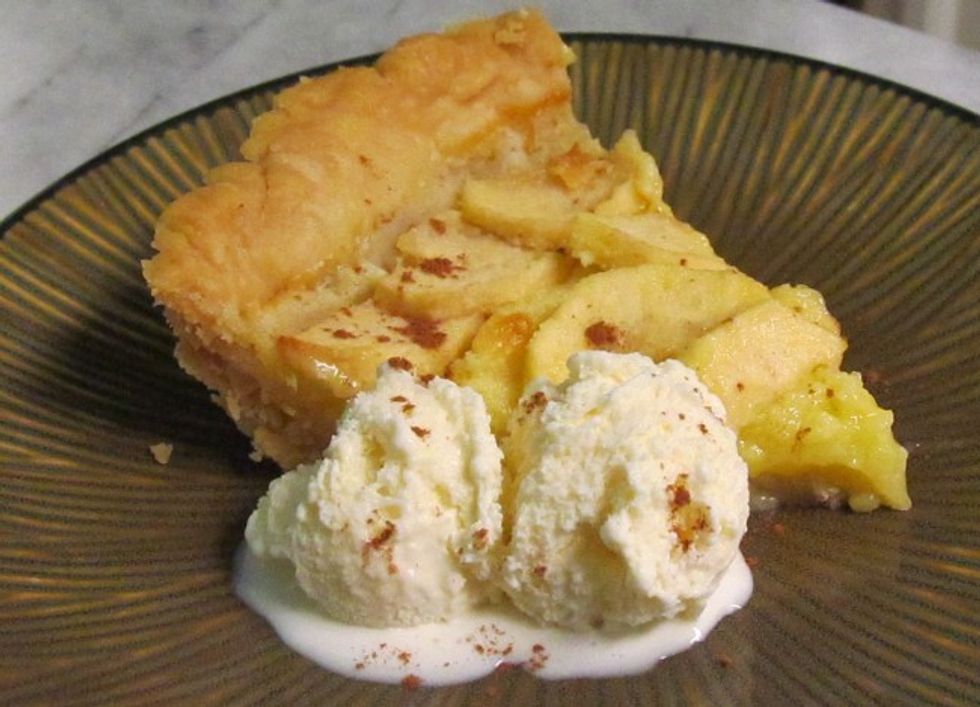 Today we celebrate the feast of Teresa of Ávila, also known as Teresa of Jesus. Teresa found life in a 16th century Spanish convent too full of gossip and other social activity to be able to really get down to deep thought and prayer, so she took some other bookish nuns to the outskirts of town, where they refused to wear shoes, flagellated themselves, and engaged in meditative prayer.

Teresa's story shares a number of elements with our old friend Joseph of Cupertino, the Flying Friar. They both lived monastic lifestyles in the midst of the Protestant Reformation; both were known for levitation, and they each experienced ecstatic visions. In stark contrast to Joseph, Teresa was not a fucking idiot. She wrote a number of books, including a seminal work on meditation, El Castillo Interior (The Interior Castle), in which she details increasingly intense levels of religious contemplative prayer. This and much of her other work was inspired by her frequent visual, auditory, and tactile hallucinations. Let's quote Wikipedia directly to shed some light on those tactile trips:

On St. Peter's Day in 1559, Teresa became firmly convinced that Jesus Christ presented himself to her in bodily form, though invisible.

Another of her well-known visions included an angel stabbing her repeatedly with a spear of gold and fire, filling her with love for God (we've all been there, right?).

In a triumph of post-Vatican II feminism, she and Catherine of Siena were the first women to be named Doctors of the Church, in 1970. Also because of her smarts and penchant for deep concentration, St. Teresa of Ávila is the patron saint of chess. To honor her and the seasonality of apples, we will make an apple chess pie.

Chess pie has a custard-like filling, and the distinguishing factor is corn meal in the custard. The most common varieties are lemon and chocolate, but you can put whatever you like in them. Autumn is apple time. Do not buy apples from your supermart. They are nasty and grainy because they've been in cold storage for a year. Go to an orchard and pick your own, or find a trusted roadside/farmers market purveyor. Buy a peck, and put them in your fridge. They will last.

1/2 cup of melted butter (that's one stick, or a quarter pound)

Heat oven to 425° F. Prick the pie dough all over with a fork, then "blind bake" it for about 10 minutes, until it's starting  to change color slightly.

Remove the pie crust, and turn the oven down to 350°F. Place the apple slices in a fancy arrangement in the pie crust. It should be one layer of apples.

Beat the eggs so they're nice and beat up together.   Add the sugar, corn meal, lemon juice, vanilla, and melted butter, and beat just enough to combine everything.

Gently pour the mixture over the apples, or else you'll ugly up that fancy arrangement upon which you just spent so much effort.

Bake for about 40-60 minutes, until the top is golden brown and delicious and the filling is set.

Enjoy, á la mode, and according to The Fannie Farmer Cookbook, which everyone should have a copy of, "slightly warm (or room temperature, but not chilled!)."

Think deeply about where the apple ends and the chess filling begins. This is what Teresa of Ávila termed "devotion of union."