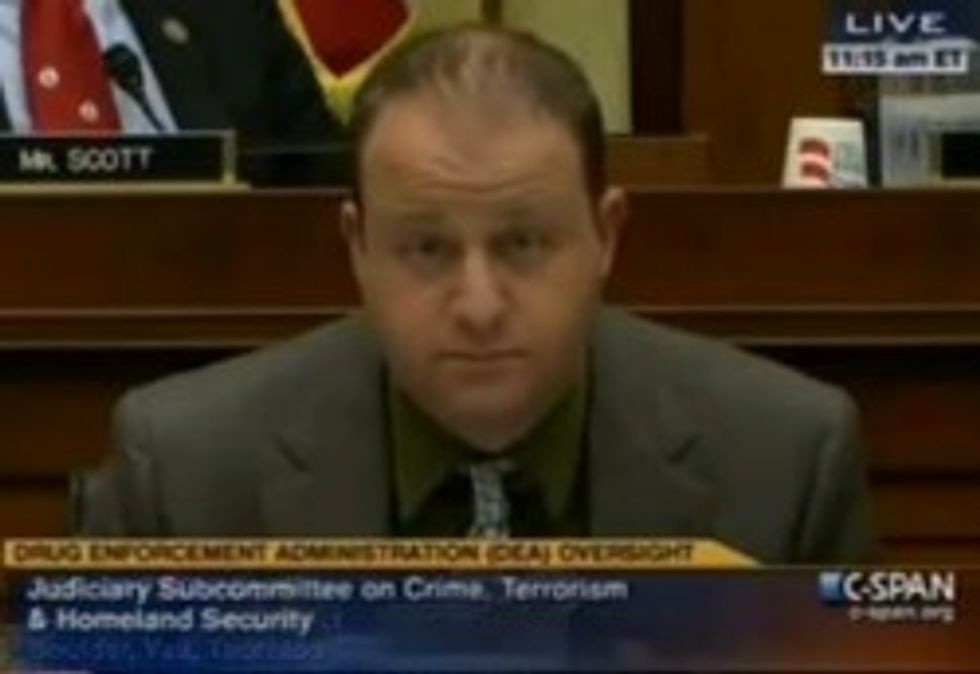 There wasa video posted online yesterday, friends. A video showcasing such unparalleled gall, such an absurd devotion to nonsensical untruths, that it could have only come from one place: Congress.

It is a video of Colorado Congressman Jared Polis taking a large, thick-streamed whiz on whatever credibility the Drug Enforcement Administration had left — he put out every last ember of seriousness, every possible contention that the government had logic on its side in the marijuana debate, and still had enough left in the tank to write his name in the snow.

Polis was talking to DEA Administrator Michele Leonhart, the rabidly anti-pot top cop in the DEA who said in 2010 she didn't care about state medical marijuana laws, she was going to keep on arresting people, thankyouverymuch.

Polis was asking Leonhart yes-or-no questions about weed. And she repeatedly, and with much thought, refused to say that marijuana was less harmful than heroin. Or crack. Or meth. It's a competition between Cheech and Chong and Requiem for a Dream, and the DEA is telling Congress they're the same movie.

It's a pain in the ass to transcribe things. Like, way more work than poor secretive Wonkette Jr. usually puts into these interblog things. But... man. This one's a doozy, and you poor folks with "day jobs" and "bosses who care about you doing work" shouldn't miss out because you can't watch videos.

Polis: Is crack worse for a person than marijuana?

Leonhart: I believe all illegal drugs are bad.

Is methamphetamine worse for somebody's health than marijuana?

I don't think any illegal drug—

Is heroin worse for someone's health than marijuana?

I mean either yes, no, or I don't know. I mean, if you don't know you can look this up. You should know this, as the chief administrator for the Drug Enforcement Agency. I'm asking you a very straightforward question: Is heroin worse for someone's health than marijuana?

All illegal drugs are bad.

Does this mean you don't know?

Heroin causes an addiction that causes many problems and is very hard to kick.

So does that mean that the health impact of heroin is worse than marijuana? Is that what you're telling me?

I think you're asking a subjective question.

No, it's objective. Just looking at the science. This is your area of expertise. I'm a layperson but I've read some of the studies and am aware of it. I'm just asking you ask an expert in the subject area, is heroin worse for someone's health than marijuana?

I think generally the properties of heroin, yes, it's more addictive.

Is methamphetamine more addictive than marijuana?

Well, both are addictive.

And are those painkillers addictive?

Yes they are. Very addictive.

And are those painkillers more addictive than marijuana?

All illegal drugs are in Schedule I are addictive.

Well, again, this is a health-based question and I know you're a, obviously you have a law-enforcement background, but I'm sure you're also familiar, given your position, with the science of the matter. And I'm asking you know, again, clearly, your agency has established abuse of prescription drugs as the top priority — is that therefore an indication that prescription drugs are more addictive than marijuana?

All illegal drugs are addictive.

Because it's an emergent, an emerging threat, because people are turning to prescription drugs faster than any other drug, that is why we prioritize it.

In many states, including my home state of Colorado, we have a legalized and regulated regime of medical marijuana, and we have found some great degree of success in combating the abuse of prescription drugs by making sure the patients have access to medical marijuana, which the science indicates, and I would certainly encourage you to look at the science, is less addictive and less harmful to human health than some of the narcotic prescription drugs that are abused. And when they're used on-label than can be very harmful to health as well.

Well, Congress has determined that marijuana is a controlled substance, and DEA is tasked with enforcing federal law.

We will look at any options for reducing drug addiction.