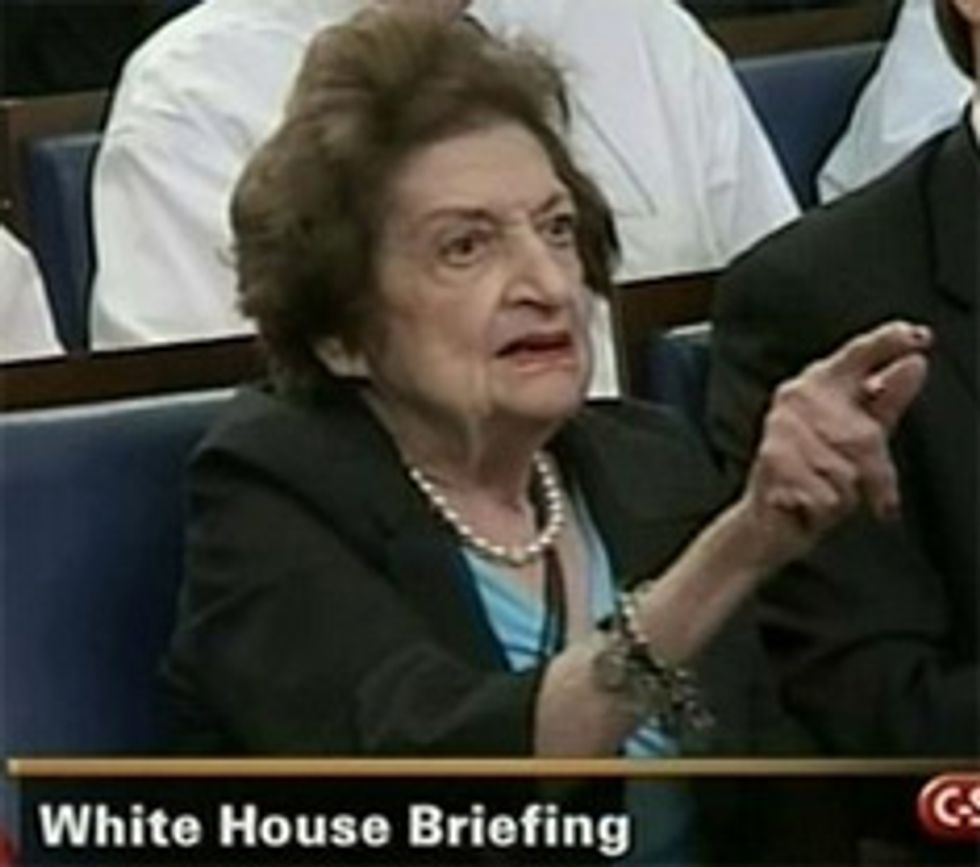 Between about 1920 and the year 2000, Helen Thomas was a White House correspondent for United Press. When the Moonie Church bought what was left of that fabled wire service a decade ago, it ended UPI's long sad decline. And Helen Thomas quit, which was more symbolic than anything because it had been years since her White House gossip/anecdote column had been carried by daily newspapers. But, much was always made of her historic role as the first lady to serve as a news organization's official presidential press-conference attendee. Even though WH correspondents are literally secretaries -- a job women did without controversy long before "gender equality" -- it was a very big deal that Helen Thomas got to politely say thank you to the president after everybody took down his dictation. But her post-UPI notoriety was for barking lectures at George W. Bush's myriad spokespeople, which was occassionaly entertaining, but now she's in big trouble for telling a Rabbi, on videotape, that Israel's entire population of Jews should "go home [to] Poland, Germany," which the Jews really did try this one time, and it ended poorly.

Ugh. Hearst should've retired her a couple of years ago, honestly, but she occupies some weird place between history and "the liberal bloggers love her for saying what every liberal blog commenters loves to type."

But at least this won't turn into another manufactured outrage on the AIPAC Far Right, right?

Loathsome former Bush Press Secretary Ari Fleischer is leading the Fox News Gang's calls for her firing and probably her imprisonment at Gitmo. But they'll suceed if they just Win the Morning for another day or two, which is all it takes in our current news cycle for the actual Israel story in the news (the IDF's insane commando attack on some boats bringing aid to walled-off Gaza) to vanish in a bunch of noise about a batty old lady who, like more than a few very angry people, has fallen all too easily from the moral post of condemning Israel's right-wing lunatic government to the sewer of antisemitic bile. [Sam Stein/ABC News/Washington Post]