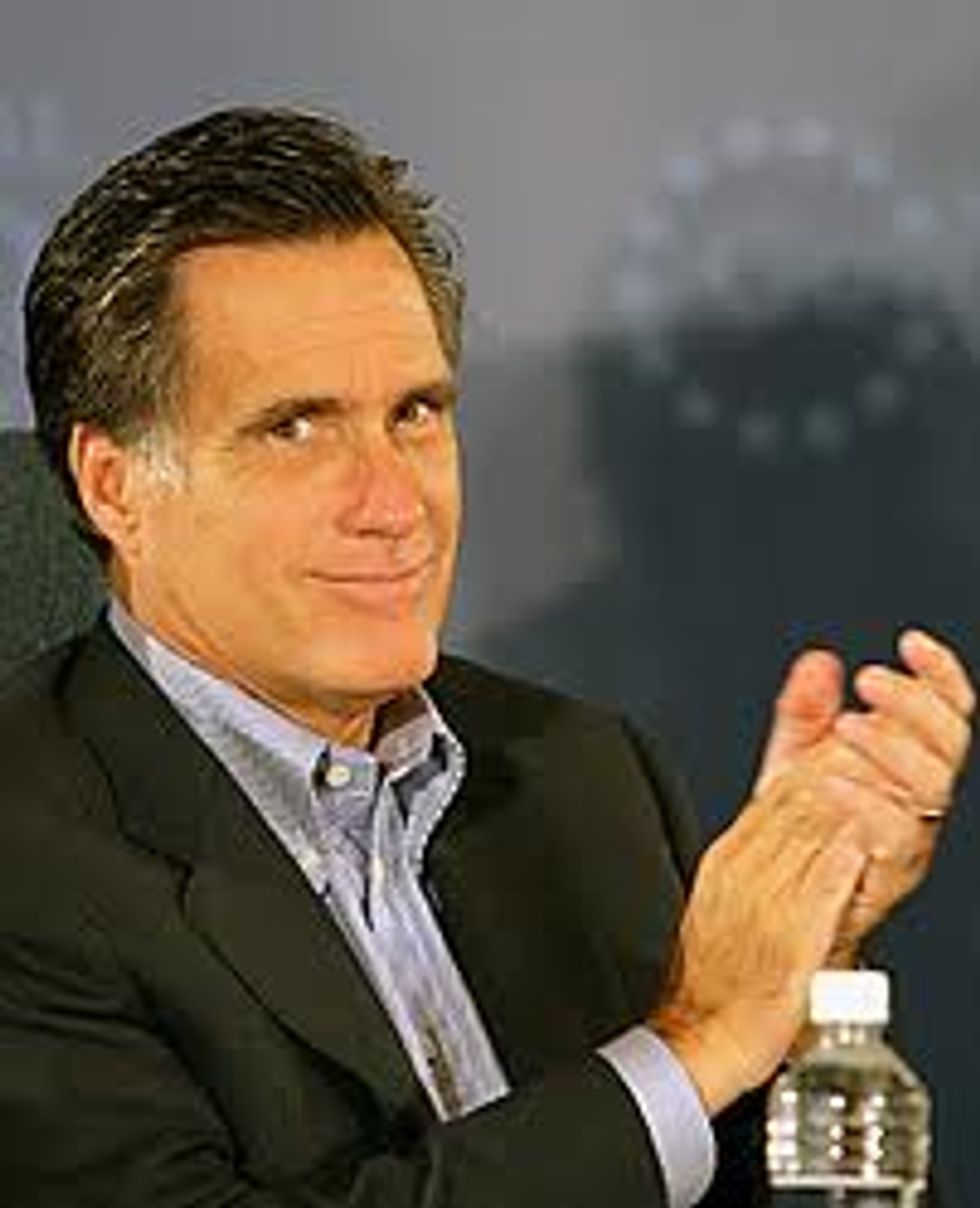 New York, come on down! Pennsylvania! Connecticut! Rhode Island! DELAWARE! Politico says Scientology founder L. Newton Hubbard has a chance to win in Delaware, but mostly the article is like haha madeyalook! Newt is done. Roasted. On a spit with an apple. Make sure to turn him evenly, to give the skin that lovely crackle. YES WE ARE SAYING NEWT GINGRICH SHOULD BE EATEN. Welcome to liveblog, fellows!

8:05 PM -- RIVETING television looking at Alan Colmes's face, but a bizarro moment from Bill O'Reilly who actually decries the media not illuminating the fact that Obama is not a Muslin? We haz a confused. We will listen to this for a moment.

8:07 PM -- Birthers and truthers are from the Internet, and it is the Internet's fault that we are all so lunatical. We could not agree any more fervently, brunette lady on O'Reilly.

8:09 PM -- Bill O'Reilly does not even agree with Linda Chavez that the libs have a bigger "megaphone" than the cons. Does he not know about the LIBERAL MEDIA? You would think he would know about them.

8:12 PM -- Wouldn't it be so great if Rick Santorum still won in Pennsylvania (we have not checked to see if he is still on the ballot, and you cannot make us) and GOT BACK IN THE RACE! Oh, we miss that sneery, spitty, smegma-slicked puss of his. Newt is grouchy in a BORING way, he just wants to go back to Greece.

8:14 PM -- You guys, seriously, we are worried about Bill O'Reilly. He just spent a full 12 hours DEBUNKING an Internet meme about Abraham Lincoln slapping Bammerz from the grave. Oooooh, we get it, he is mad at the Internet because of falafels. FUCK IT, WE'LL DO IT LIVE!

8:17 PM -- YOU GUYS TURN ON O'REILLY NOW HE IS MAD AT GHOST ANDREW BREITBART. Kirsten and I are seriously having strokes right now.

8:23 -- VIKING WARBLOGGER KBJ HERE. Mitt Romney has won the upscale New York suburb of Connecticut with one million percent of the vote.

8:36 -- Ooops, we have stolen the remote from the Editrix. Back to CNN! There is John McCain, looking like he needs a blood transfusion. Can you guess what he is saying? Hint: WAR WAR WAR WAR.

8:41 -- Okay, more politics. That is why we are here, we think. CNN is calling Delaware for Mitt Romney. Newt Gingrich will now wander off and molest a penguin:

8:45 -- O hai, Schoenkopf again. NEWT SPEAKS! What will he say? He is wearing a blue tie like a fucking Democrat Traitor.

8:46 -- President Obama's performance at Chapel Hill, slow-jamming the newz with J. Fallon, is the reason this is the most important election IN HISTORY. Also, gas prizzzzzzzzzzzzzz.

8:48 -- China will enslave your children, for student loans, before they eat them with duck sauce. AND ANDERSON COOPER OUT!

8:50 -- Poor L. Newt. Cooper ditched him about the time we tried for the the third time to parse a sentence about China, and Fox didn't cover him speaking at all. But they ELECTION ALERT for that nice Ann Romney, whose hair looks just the right Diane Sawyer shade of golden bitch.

8:53 -- KBJ BACK: Mitt Romney will now take the stage. Mitt will have you know that he has figured out what is going on in America, right now: "Americans are tired of being tired." Think about that. It is your Mormon Koan for the evening.

8:56 -- Mitt Romney's brain has been infected, causing his speech to have a mild twang he did not have before, just like those psychotic cows in California. How nice for him.

8:58 -- We have figured out the seating arrangement for the supporters arranged behind Mitt Romney on stage. The youths and the browns are on his left side, and the white olds in turtlenecks on the right. He is in the middle, get it? Also, Mitt will not let anyone steal his bags of money, fuck all of you.

9:04 -- SNOOOOOOZE. We are listening for some of those "soundbite" things, but Mitt Romney has nothing but desperate pablum to share. Let us sum up: Mitt Romney is so sad that you are so poor. Sad sad sad. It wears out his battery slightly more than usual.

9:06 -- Mitt Romney promises that Americans will be able to mock foreigners for their inferior standards of living again very soon. He knows how much you need to feel superior. He understands that perhaps better than anything else.

9:10 -- Schoenkopf: Well, that might have been the GREATEST LIVE BLOG EVER! We watched Bill O'Reilly (and on the real we hope he is not, like, waiting on a test from his doctor, because we was being sort of compassionate and gentle and calling out GOP hacktards, and now we are askeered). Then we watched something else. And then there was Newt Gingrich, whom the teevee channels looked at for all of 95 seconds before they decided HE WAS THE WEAKEST LINK GOODBYE. (Except for Fox, which did not play his speech at all.) And then Mitt Romney came on to sexplain that Barack Obama stole your bicycle. Join us again NEVER. #itwasamistake GOODNIGHT!