What Is Free Speech Even Coming To When Deadbeat Dad Joe Walsh Can't Say The N-Word On The Radio? 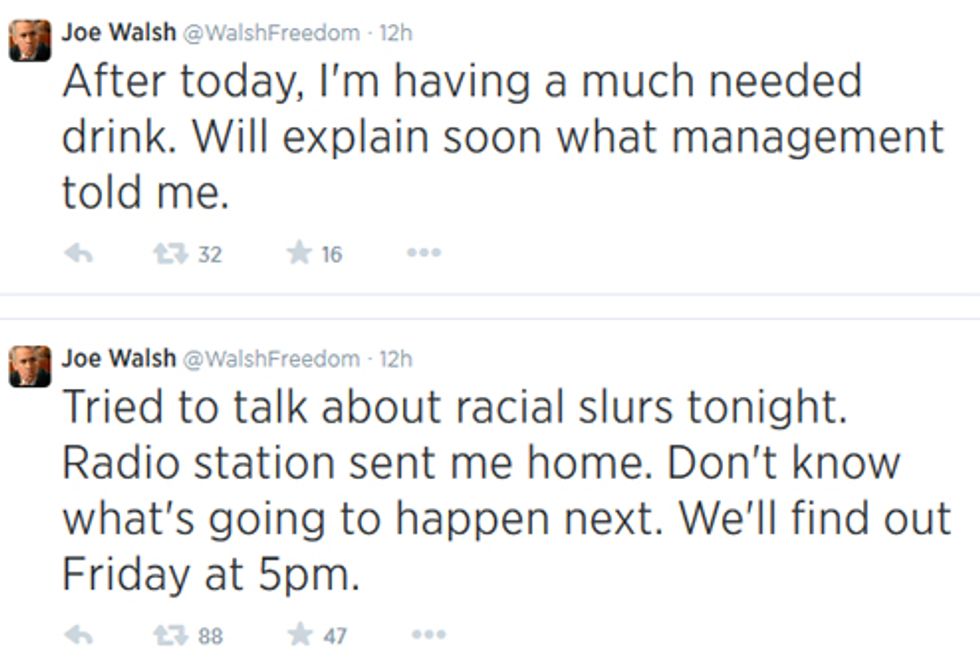 Former Illinois congresscritter and forever deadbeat dad Joe Walsh was sent home early from his job as a wingnut talk radio host Thursday, because obviously the management of the radio station has no idea how Free Speach* works. See, all he was doing was making a commentary about the controversy over the Washington Redskins' team name, and to make his point it was very important to him that he actually say other offensive terms on the air, for demonstration purposes. For some reason, his socialist employers at Chicago station WIND-AM didn't understand the simple logic of this, and yanked him off the air.

Happily for the world, he live-tweeted his unfolding beatdown by the forces of oppression.

See? He was making a serious point with that thoughtful comparison: "Redskins" is not actually offensive, so shut up you dumb Injuns and go back to drinking your firewater, HAW HAW. Free speach is dead in this country. It has been staked to an anthill and scalped, is what has happened.

We'd just like to take a moment to salute Joe Walsh, censorship victim, for his brave willingness to demonstrate the hypocrisy of political correctness -- after all, doesn't everyone know that all possible insults are exactly equal in their offensiveness, and that "Bible Thumper" and "Nigger" are completely the same, because they're both disparaging? It is truly a sad day for the 1st Amendment. We'll let you know whether Mr. Walsh is ever released from the gulag.

* Free Speach is different from free speech; the most basic principle of Free Speach is that you can say whatever you like with no consequences, because AMERICA.