Helpful WaPo Columnist Tells Us What Giffords Would Think About Wisconsin 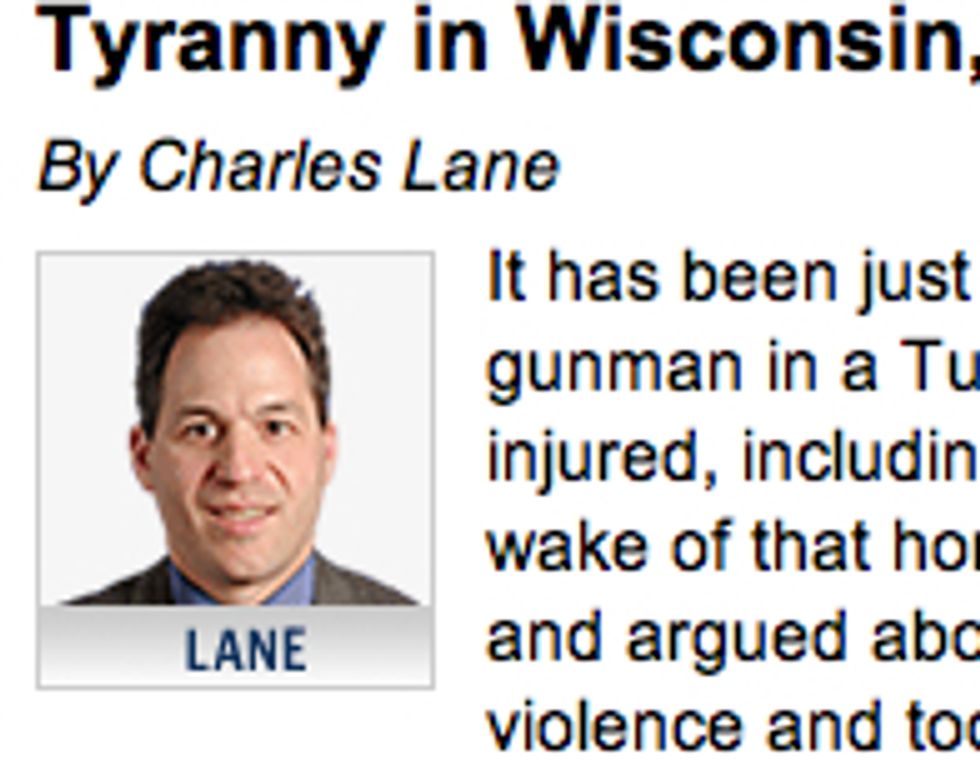 Unfortunately, Gabrielle Giffords was shot in the head, so she currently can't tell us what she thinks about the situation in Wisconsin, or even if she can, her family is probably making her talk about things like "how she cares about them" or "how to stay alive and recover from the bullet that went through her brain." Thankfully, theWashington Post employs a full roster of op-ed contributors who have nothing better to do with their spare time than pretend to know what people with life-threatening gunshot wounds think about political issues thousands of miles away that don't concern them. "If the brave Gabrielle Giffords could speak normally, what would she say about these events? I hope she would agree with me: This is a sad moment for liberalism," Charles Lane writes. Yeah, this classy gentleman is probably correct! It's so nice of him to help out this gunshot victim who's unfortunately not "normal."

Here's how he opens his column:

It has been just over five weeks since a deranged gunman in a Tucson suburb left six people dead and 13 injured, including Rep. Gabrielle Giffords (D-Ariz.).

It sure has been awhile. Stop lounging around playing on your iPad, Giffords! Get to work giving op-ed columnists material for which they can criticize you!

Perhaps most disappointing of all is that the president himself, rather than living up to the words he spoke so eloquently in Tuscon, has chosen to fuel the fury on the Great Lakes. He labeled Walker's legislation "an assault on unions," while the White House political operation bused in more demonstrators to join those waving Walker = Hitler placards. These are the words and deeds of a partisan politician, not a national leader.

If the brave Gabrielle Giffords could speak normally, what would she say about these events? I hope she would agree with me: This is a sad moment for liberalism, for the Democratic Party, and, really, for the whole country.

Yeah, but if she didn't agree with him, what a bitch, right? Next time you get shot in the head, try to remember you have to conform to this guy's definition of "civil" in your opinion on the actions of workers whose very livelihoods are threatened by pending legislation, lady! [WP via Balloon Juice]