Here Are Your Photoshop And Caption Contest Winners, God Bless Us Everyone 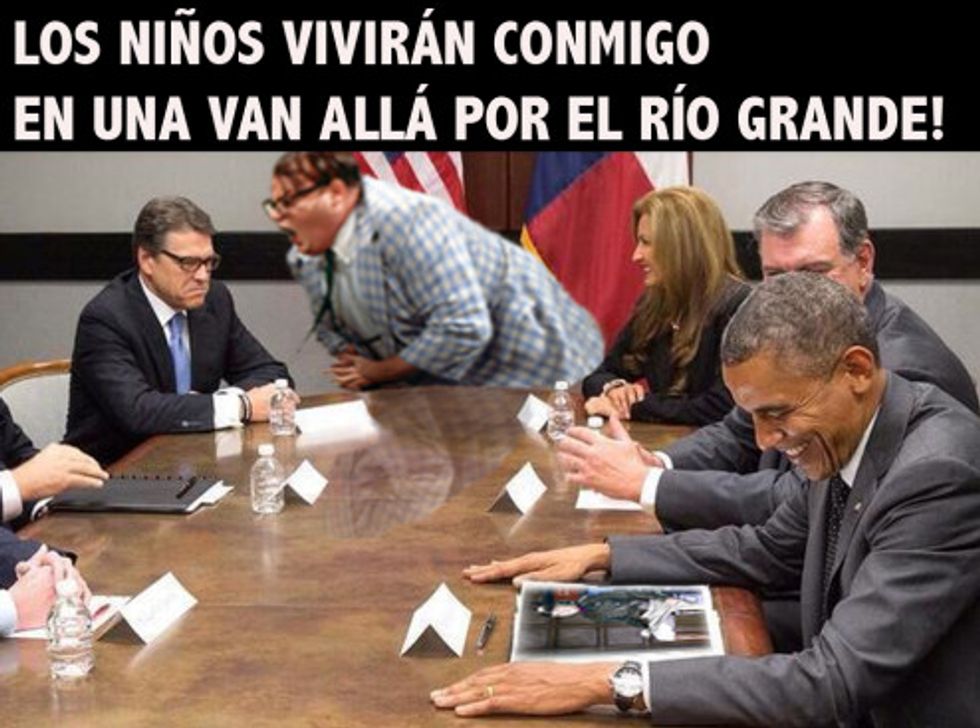 And Dok wins!!!! OK, actually, no, but we decided that with only 5 entries to our Great Big Rick Perry Photoshop Contest, it wouldn't hurt to pad things a bit. What happened, guys? We usually get tons of weirdly wonderful entries, but it's almost as if you couldn't bear to have Rick Perry's sour face on your computer at all. (And as for those of you who thought it was a caption contest...) No matter -- we will continue with the silly pics, and you will again bring the funneh! After the jump, our winner and runners up, and also too the winner and honorable mentions of the Super Excellent Hannity Caption Contest.

First up, our winner winner chicken dinner for the Rick Perry Photoshopping, from mysterious competitor "BTWBFDIMHO:"

Not only is the Chris Farley character behind the table, he's reflected in its surface, and so technical proficiency plus humour content takes the prize.

And then there's our caption contest, for this bizarro photo of Mr. Sean Hannity, who appears to think that he is going to "see some action" in the great border crisis of 2014. If we had a dearth of entries for the Photochopping, we had a super-giganto-buttload of entries for this caption contest, and may larffs were had! It was pleasantly difficult to judge, even! And so, our winner, by "Iron_Squirrel":

"Secure your borders with this one simple prick."

Congratulations, winners! You get an actual tangible thing, and not just an "Obamaphone," so please send an email with your name and mailing address to doktorzoom at-sign wonkette dot-or-period com, and we will get a tote bag to you, with which things can be toted.

Now, on to our runners/up, dishonorable mentions, and what-have-you! No prize for these, but you get braggin' rights. In what Texas Hero Molly Ivins called "Ort," we have this creation by "JB" that straddles the line between caption and photo-manipulation, and gives Rick Perry the Mametesque berating he deserves:

We have a feeling the shampoo is a reference to Perry's nickname, Gov. Goodhair (bestowed by St. Molly Ivins), and he's sad because he got... low-rent shampoo? We think we're missing something here, but we're kind of taken by the way Obama's shampoo overs above his briefing book.

And then there's our Hannity Runners-up! First off, from "BloviateMe,"

"Sean Hanitty is an enormous douche."

(Dis)honorable mention to "Damanoid" for one of the few poetic entries:

Picture yourself in a boat on a river

Somebody calls you, you answer quite slowly--

A turd with Kalashnikov eyes!

Loser at the starboard deck gun!...

And a very special not-a-caption-but-damn-that-sounds-about-right badge for this comment from "Bearperney":

I spent a year and two months of my tour in Vietnam carrying around an M16, sometimes the M60 machine gun and for a while working with a crew to fire God knows how many 105mm howitzer rounds.... ...and yet, I never had my picture taken with any of those weapons.

You know who did? REMFs (Rear Echelon M. F.s) and political visitors from the states.

In other words: Assholes.

Any comment that reminds us of how desk jockey Joe McCarthy got his nickname is OK by us.

To all the other entrants, thank you for your frequently hilarious comments, your puzzling photoshops, and your continued Wonkishness. If you want to win next time, pull yourself up by your comedy bootstraps and get off welfare.