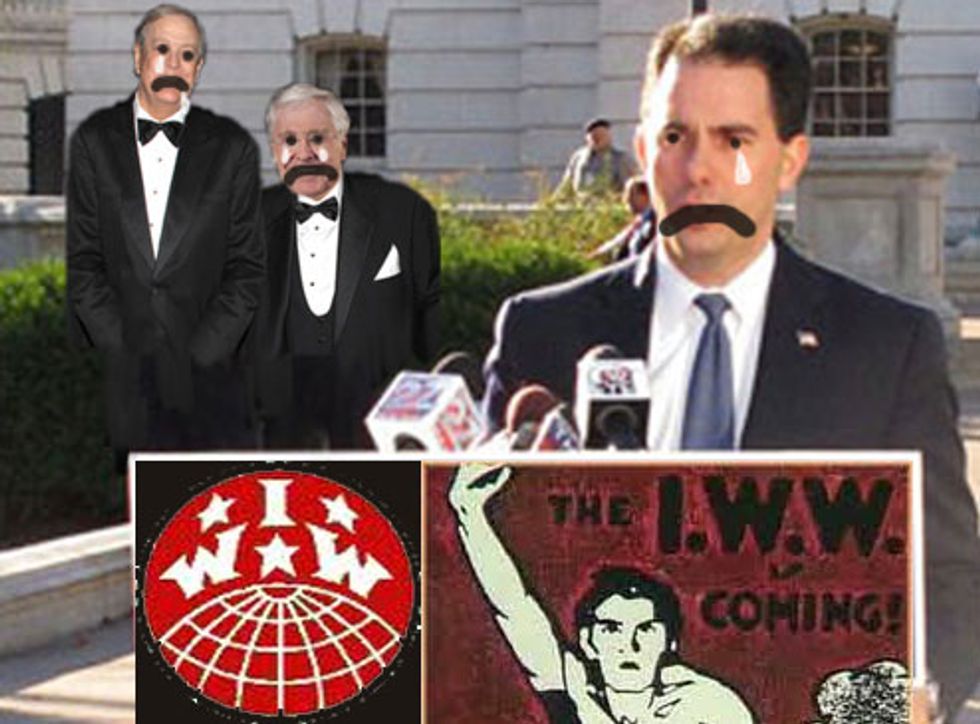 How inexorably, ascendantly awesome and correct are conservative and neo-libertarian ideas? Why, they're so awesome and correct that it only costseveral hundred million dollars to propel the candidates espousing them to mostly respectable losses in the last national election! Yes, it was fun to watch all the antisocial billionaires and their Tea Puppets get smacked around (with votes!) last November, but we haven't forgotten for a second that the Kochs and their ilk remain hugely influential. So it was interesting to learn of the Koch-associated Freedom Partners, yet another conservative money hose that "raised and spent $250 million in 2012" yet remained unknown to almost everyone until earlier this week, when Marc Short, the group's president, revealed Freedom Partners' IRS filing to the turd polishers at POLITICO:

“There’s a mystery around us that makes an interesting story,” Short said in an interview in his conference room. “There’s also a vilification that happens that gets exaggerated when your opposition thinks you’re secretive. Our members are proud to be part of [the organization].”

The full 38-page filing isn't public, but it will soon be, and it won't be a story because POLITICO already scooped it, see, old news, move along people, hey look over there Miley Cyrus is licking a hammer.

The Crooks and Liars piece expands on POLITICO's thin gruel by Never Forgetting the list of people who attended the Koch's 2011 meeting in which One Of The Kochs compared Barack Obama to Saddam Hussein (the only difference being that hugely expensive and pointless effort to remove Saddam actually succeeded). Foster Friess was there, remember him?! The guy who said knee aspirin can cure female sluttery? Here are some others:

And many more! Collect 'em all!

Lastly, we noticed that The LIBRE Initiative got $3.1 million from Freedom Partners, remember when we wrote about them? We searched around for their funders then, but found nothing, which we attributed to LIBRE's 501(c)(4) status. Now we know that $3.1 million bucks can buy about 11,000 Facebook likes and a badly written op-ed in the National Review. But we repeat ourselves.