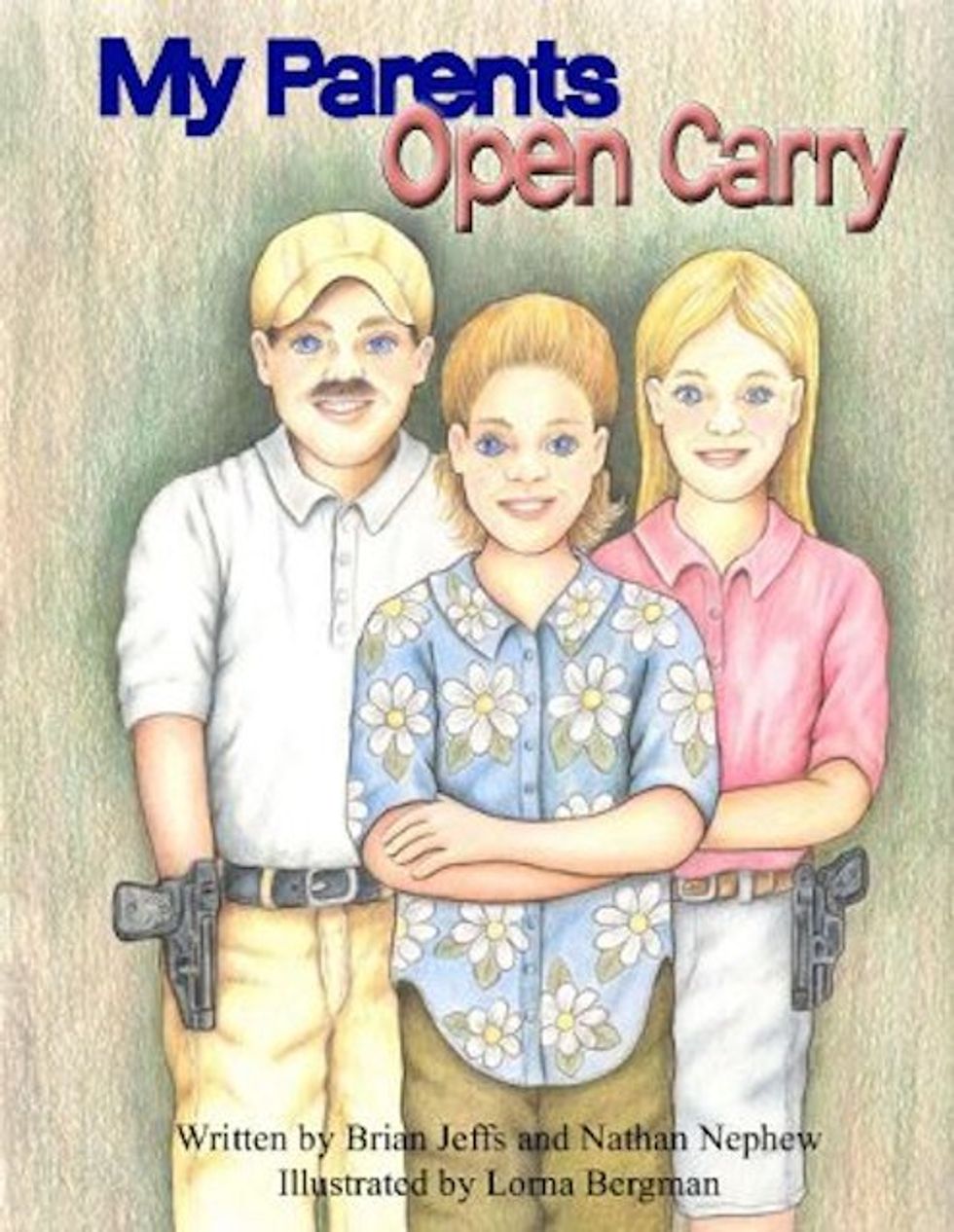 We don't have many literary pretensions here at yr Wonkette. Mostly, we like to read stuff that we can either make fun of or masturbate to or both. But we're really going to work on expanding our reading choices this year, and we're resolving to start with a terrific little piece of young adult literature from the good folks at Michigan Open Carry. Yes, it's My Parents Open Carry, a heartwarming tale of how great it is to spend your teenage Saturday running around doing errands with Mom and Dad and their pile of guns. Pfft. That doesn't even sound real. What self-respecting teenager wants to spend their precious days off of school at the grocery store with the 'rents? Gun-lovin' ones, looks like.

My Parents Open Carry tells the story of “13-year-old Brenna Strong along with her mom, Bea, and her dad, Richard [spending] a typical Saturday running errands and having fun together,” according to the book’s official site. However, “[w]hat’s not so typical is that Brenna’s parents lawfully open carry handguns for self-defense.”

Man, our hearts are so warmed right now that they might just burst into flames. Also, we're pretty impressed that the book comes with its own trailer, like every good children's book needs. It's got the very finest in stock piano music AND a series of helpful factoids printed in a font that is just one step removed from Comic Sans. Your teens will dig it, dig?? And if you're lucky, they'll turn out like this little teenage champ who has taken to dragging a shotgun through the streets of Aurora, Colorado, so he can help people feel comfy with open carry.

Steve Lohner, 18, was recently stopped by police responding to 911 calls alerting them about the teen. When asked to provide ID proving his age, Lohner refused to do so, while videotaping the encounter [at link] on his phone. The teen subsequently posted the video online, according FOX13.

In the video, Lohner explains to an officer that he is the process of returning home after buying cigarettes. When asked why he’s carrying a shotgun, Lohner replies, “For the defense of myself and those around me.” [...]

Lohner admitted that people might feel uncomfortable seeing a teen carrying out a gun, saying “I feel like a lot of people now they see a weapon like that and they think, you know, James Holmes or Sandy Hook.”

So weird how people that live in the town where James Holmes used a gun to murder a whole bunch of people would flinch at the site of this rando kid toting a shotgun around town, right? Maybe we should all raise money to send a copy of Brenna Has Two Nutbar Sociopath Gun-Toting Parents or whatever that touching Michigan Open Carry book is called to every last person in Aurora so they can learn all about how great guns really are. We smell a Kickstarter!