Here Is Your ALL-DAY Wonk-tacular Election News Post, Which Will Be Updated ALL DAY! 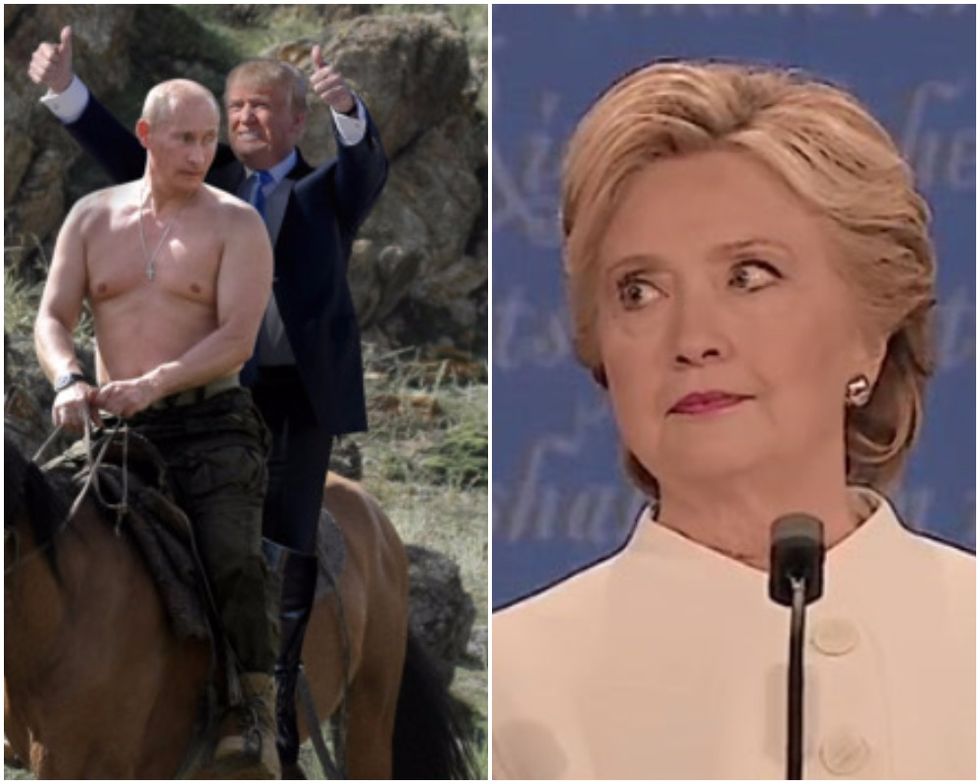 GREETINGS, GOOD MORNING, BONJOUR! It is time for the Super Bowl and the World Figure Skating Championships of politics, otherwise known as the U.S. American presidential election! We are your Wonkette Jr., which means either we are all contributing to this post, or we have all taken the day off and instructed Wonkette Baby Donna Rose to man the ship while the growned-ups go drinking.

Your live-blogger for the day?

We can report at this point that Hillary Clinton has voted in her hometown of Chappaqua, New York, and also that Hillary won the traditional midnight voting kick-off thing that happens in Dickstown Snatch in New Hampshire, or whatever it's called. Also too, the kids on "Morning Joe" are on speed we think.

Oh, and also this:

Guess he finally decided to vote for Hillary.

Keep refreshing this page EVERY THIRTY SECONDS FOR THE REST OF THE DAY!

9:30: Rat-romancer Roger Stone has a very special treat for us that we are stealing forever and ever, it is so good it will be the first, last and only post on this livebloog, forever!

Please send your outraged cries about how third parties will never get any traction as long as we settle for the Evil of Two Lessers directly to DearShitFerBrains@wonkette.com.

Are you shocked yet? We bet you are way shocked.

10:05: Dok has a story up for you! It is how James O'Keefe made Huma Abedin do election fraud! Oh that jokester! That terrible, grotesque, stupid, mean, lying, ratfucking, and quite unattractive jokester!

MEANWHILE! Ann Coulter has some Thoughts, and would you believe they are stupid thoughts???

If that were the case, Ann, Donald Trump could not vote for Trump in a landslide. (His mother was a Scottish housekeeper or something.) Neither could Ivanka and her idiot brothers, who are loinfruits of Zsa Zsa Gabor, I am pretty sure. Care to try your gross xenophobia again?

Don't worry about a Hillary Clinton presidency. Be happy!

10:10: Have you read your Editrix's blast from the past '08 Obama endorsement yet? She will make you feel better about Hillary too, if you are a person who still worries about Hillary. We're still not giving her a unicorn though. Just a sword.

10:25: It's fair to say the Clinton campaign is feeling pretty confident if they have time to do this:

omg the Clinton campaign did the #MannequinChallenge on her plane pic.twitter.com/gQDKPhifny

Seriously, it is all just fun and games and #mannequinchallenges on the Clinton plane! Meanwhile, Donald Trump is eating his hair.

Have you bought a Nasty Woman tee or tote bag or coffee mug today?

Have you bought a Wonkette Game of US America Elections Game: The Game yet? We have sooooo many. It's fun! And collectible! And we made it before the election got so dark and weird and full of FBI men and Nazis! Look, it's so easy a babby can play!

The scene at Susan B. Anthony's grave. And it's a scene. pic.twitter.com/mgQNwmsB9f

11:05 IN MEMORIAM: The Trump Surrogates. Oh, how we will miss them if they ever get off our TV.

I will remember you. Will you remember me? In memoriam ... the best of the worst Trump pundits pic.twitter.com/J04tJ28yfG

11:15 And here is Donald Trump getting booed as he shows up to do #democracy.

Scene outside PS 59 as Donald Trump arrives to vote for himself for the second time ever pic.twitter.com/u2ut5yjDss

He will probably win New York though, we bet, because he said so, and he never lies.

This Election Tried To Kill Us, But We Are Not Dead We Don't Think

11:30: Look who wrote you a thing, it is Evan and he is the best! Go laugh and cry and read it again and again!

11:50: Here is your last night's Samantha Bee, on how we tore down Hillary Rodham like a pack of goddamn wolves. You will like it. Watch it.

All the Ameros for the continual through-line of JESUS CHRIST PLEASE JUST SEND BILL TO THE BAHAMAS ALREADY. We agree!

And here's @realDonaldTrump getting booed even harder on the way out... #ilovenewyorkpic.twitter.com/rkXSPklrul

And here is Trump making sure Melania isn't pulling an Evangelical Housewife and secretly voting for Hillz.

Ugh, we unfortunately have to "defend" Donald Trump now. If you watch the video, you'll see he's talking about being proud of how hard his kids worked on his campaign, and "to a lesser extent, Tiffany." But he's not saying he's just generally less proud of Tiffany, even though "TO A LESSER EXTENT TIFFANY" is probably engraved on a plaque above the entrance to Tiffany's bedroom at Trump Tower, which is in the basement.

He actually says Tiffany just got out of school, so she wasn't able to do quite as much for the campaign as Trump's other hellspawn.

This concludes "defending Donald Trump," we shall now move on.

12:33: Early exit polling from Politico shows American voters think this election is the worst and are sad and depressed and angry and nervous and hate everything right now. About what we expected!

This Election Has Made Everyone Dumber, And May God Have Mercy On Our Souls

Reality: What a Concept!

12:38: Dok has perpetrated a Thinky Piece on how this election has changed our perceptions of reality FOREVER. You should go read it, and then laugh or weep, as the mood hits you. It's all subjective anyway, as are facts in the Trump Era.

In Philadelphia tailing a pastor's bus that's bussing people to the polls. #VeritasIsEverywhere & we will catch your #VoterFraud. @PhillyGOPpic.twitter.com/FY9UPOQolp

Oh, thank God, he's "tailing" him. To prevent him from giving people rides to the polls, because "voting" means you are rigging the election, if you are Voting While Black. Jesus Fucking Christ is this puny shitbird ever going to just go away? Probably not. He sees "voting fraud" everywhere, even if it's mostly the kind he has to create for his dumb videos.

1:10: Seriously, Eric Trump now too? Do Trump men have THAT LITTLE respect for the integrity of the ballot? And do they have THAT LITTLE trust that their wives don't lie in bed at night, dreaming of exactly which angle to slide that icepick behind the ear?

1:20: Oh, honey. Oh poor poor honey. First, take that dumb hat off your racism frog. Then? Grab all the pussy! (Do not grab the pussy. Ask nicely first.)

1:36: From the invaluable John Scalzi, creator of the Mallet of Loving Correction:

1:48: Here's some wisdom on Democracy (it's a REPUBLIC, dammit!) from deadbeat dad Joe Walsh:

2:00: Mayor of Mansfield, Georgia, posts a HILARIOUS message on his Facebook:

Riley said he wasn’t trying to be ugly.

“People take things so seriously,” he told The Atlanta Journal-Constitution. “You can’t joke about anything anymore — especially on social media.”

Donald Trump Is Suing All The Mexicans

Build the wall -- with discarded votes!

2:05: HOO BOY GUYS. Donald Trump is suing all the Mexicans, for voting against him too much! Read your Editrix Rebecca on it here!

Jesus! (Or is it "Jesus" with an h!) This fucking guy DOES NOT LOVE DEMOCRACY. Knock us over with a tamale.

The judge is skeptical, to say the least:

Voting like an American who loves America is tough, y'all!

2:32: Evan wants you to know exactly how bad Donald Trump and his whole dumb family are at voting, and at America. (It is very, very bad.)

2:40: Here's a linky to the full Trump Nevada Lawsuit for you.

God-Emperor of Nevada political reporters Jon Ralston is having fun with this:

Also, a Trump-supporting pastor has had a vision about the election, and it is that gay hornet demons are going to sting you in the wing-wang with their butts and turn you gay with their sexxxy gay hornet potion. SO 'SCITING!

Lastly, some badass high school kids have walked out of school, right in the middle of Common Core class, to yell at grown-ups to get off their behinds and go vote against asshole Sheriff Joe Arpaio. Apparently they're saying cusses about what a shithead Trump is too. KIDS THESE DAYS! Watch it here.

3:39: Oh hey, do you want to have a video to cry at, with a 102-year-old black lady talking about how grateful she is that she lived to see the first black president, and hopefully now the first lady president elected? CRY AT THIS:

My brother had a 3 hour line in Manhattan and a special visitor #Trump#ElectionDay#voteIRL#Clintonpic.twitter.com/JAH8wmAOYA

Sore Losermen: Trump Babies Will Be Crying And Suing Forever Over Nevada 'Cheating'

Begun this Rigged Election War has.

4:55: Dok has an update on Trump's Nevada Lawsuit against all the Mexican voters for you to read. Turns out Donald Trump does election lawsuits about as well as he does...well, anything, really. Hope his lawyers demanded to be paid in advance!

A Donald Trump cake being wheeled into Trump Tower @abc#ElectionDaypic.twitter.com/HSkHChfUSA

No, but seriously, who is that cake supposed to be? It sort of looks like that global warming denier Bjorn Lomborg? Or Ted Koppel? Or Robert Byrd?

"And that, grandchildren, is how Ted Koppel became the international symbol for failure."

5:40: CHI-CAAAA-GOANS! We almost forgot to invite you to go hang out with Robyn at North! Tonight! At 1637 W. North Avenue! At a time! To drink all the drinks with your strong shoulders!

That is not how drinks work!

THIS IS HOW DRINKS WORK!

It is a "salt and pepper," and the good people of Plonk in Missoula, MT, were kind enough to print out the recipe for us!

6:10: Oh hrmmmmm I am sure this is quite a coincidence! Women just wear white pantsuits in November all the time, it is how we do! ("We" do not wear white, because we do not own white, because it gets grotty and pitstainy and we don't use bleach. But we're totally sure that other people do, and Cindy McCain is not trying to say anything with her #white #pantsuit for #suffrage, nope, nothing at all.)

6:39: Now that we've got a couple of cocktails in us, we are brave enough to face cable news. Chris Matthews, to Kellyanne Conway, mentions that Hillary Clinton has two speeches prepared for tonight. This brings us back in time to one of those periodic "Hillary Clinton says a thing that makes us crazy" things: in 2008, asked if she ever thought about losing, she claimed that the thought had literally never once entered her head. And maybe she was just playing "optimism confident" thing, but it made us INSANE.

DO NOT BE LIKE GEORGE W. BUSH, PLAN FOR THE FUCKING CONTINGENCIES!!

Anyway, Hillz has a speech prepped for if "the bad news happens." Donald Trump? LOL yeah, still eating his hair.

Go here to the sexy NIGHTBLOG instead! No lines at the Disqus to cast your comments which are not allowed!