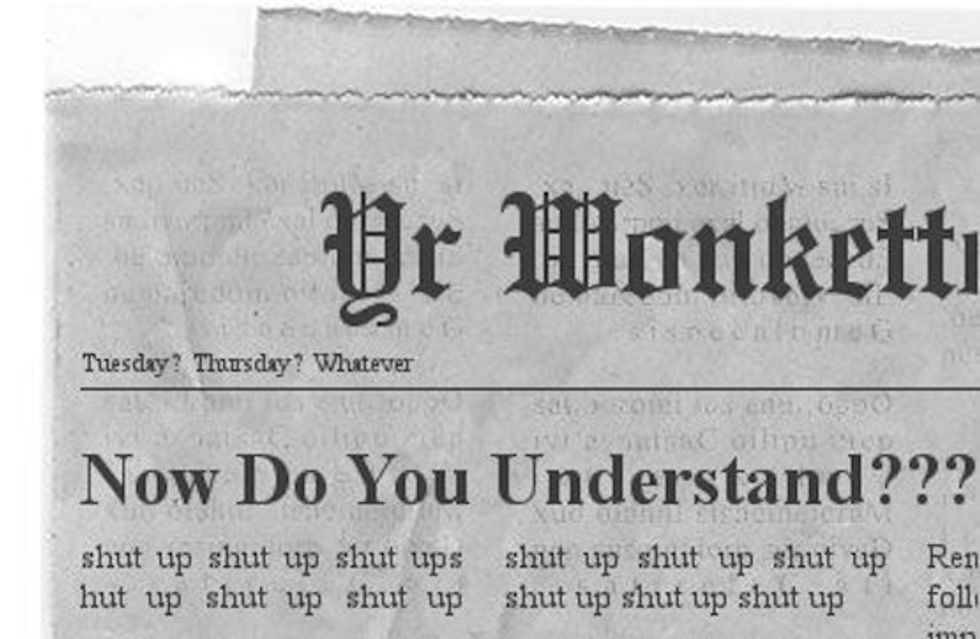 You know that we are very public service minded here at Wonkette, which is why we're bringing you this handy-dandy column that you can cut out and put in your wallet for the next 1001th time that some idjit tries to explain to you that they don't really hate the gays, but they just don't see a need for gay marriage because you can totally just make a contract for all the rights marriage confers upon you. Next time that happens, and it will happen, because there is no known cure for terminal stupid, just whip this bad boy out and show 'em whatcha got.

This is a tale of two Midwestern states. One, Nebraska, does not love the gays, but, for those of you unfamiliar with the vagaries of Midwest geography, Nebraska is verrrrryyyyy up close and personal with Iowa, a state that is all about loving the gays and letting them get married and change their names and all other sorts of gay filth.

Way back 35 years ago, a nice gay lady named Sue Kirchofer got her very first driver's license in Omaha, where she was born and raised. Fast forward a few years, and Ms. Kirchofer meets the nice gay lady of her dreams, Mary Stroesser. They live in Council Bluffs, Iowa, which is right on the border between Iowa and Nebraska. Fast forward -- WAY FORWARD. MORE FORWARD -- to 2009, when gay marriage becomes legal in Iowa. Kirchofer and Stroesser wed, and Sue Kirchofer becomes Sue Stroesser and gets herself a shiny new Iowa driver's license with her shiny new married name. Not an unusual occurrence. Do a little more fast forwarding, and now it's 2013 and the Stroessers move back to Omaha, where Sue Stroesser nee Kirchofer goes to the DMV to try to get a new Nebraska license, and then this bullshit occurs.

Sue’s legal remedy, she was told, was to go to court and have her name legally changed. Only then could she get a Nebraska driver’s license as Sue Stroesser.

That would be time-consuming and costly, but what’s most frustrating to Sue is that Sue Stroesser is who she is. Her Social Security card says so. Her passport says so, and so do her credit cards.

One can see where that might be a wee bit frustrating! And so weird that there was no cool libertarian contractual domestic partnership workaround that would magically have fixed this, right?

Listen. It was all well and good that the Supreme Court did not completely dick over the gays back in 2013 when it tossed out DOMA. But by failing to actually say that if you are married in one state you are married in every state -- which is how marriage works in these here United States -- because to do that would have drowned us all in a sea of conservative rage tears, this is what we're left with: a nice lady that met her special person three goddamn decades ago and waited all those years to be allowed to get married, only to be sucked into some positively Kafkaesque nightmare about how her married name isn't really her married name because she's married in Iowa but not in Nebraska except she is sort of married in Nebraska for some federal purposes and THIS IS BULLSHIT.

See? Now you've got this handy post that will help you explain why this isn't just an abstract issue or something that could easily have been avoided with the judicious use of lawyers and contracts. Feel free to print it out or just pull it up on your iPad and beat people about the head with it. Either way, we're glad to help.