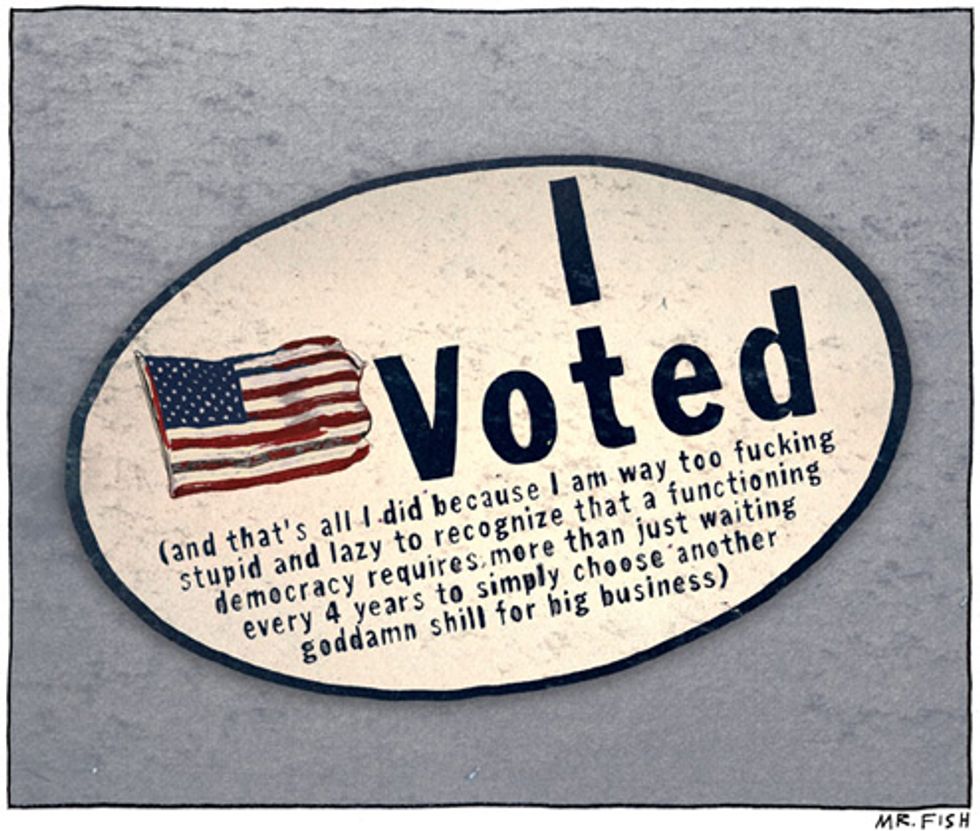 The great pageant of democracy (or before our more excitable teabagger friends write in, "Our Constitutional Republic") lurched forward yesterday and vomited forth a whole bunch of candidates for the fall general elections! Let's wipe 'em off and see what they look like -- just don't get too close. The big question on everybody's mind: Is Victoria Jackson still in the running for a seat on the Williamson County Commission in Tennessee? She sure is, becauseshe's running as an independent! We guess there were some other elections, too.

In North Carolina, Yr Wonkette's dreams were dashed and bedoomed, as completely nutsballz tea partier Greg Brannon lost the Republican U.S. Senate primary badly to RINO establishment guy Thom Tillis, who managed to get 45.7% of the vote, well over the 40% threshold needed to avoid a run-off. This means that Democrat Kay Hagan will actually have a real candidate to run against in the fall, and that we lose a reliable source for loony quotes, darn it. We have little doubt that we haven't heard the last of Brannon, though -- you just can't keep crazy like that down. In the meantime, Hagan is already calling attention to some charming stuff that Tillis said in 2011 about how Republicans need to "divide and conquer" the Poors, so that the worthy ones will turn against the lazy people who are not them:

What we have to do is find a way to divide and conquer the people who are on assistance ... We have to show respect for that woman who has cerebral palsy and had no choice, in her condition, that needs help and that we should help. And we need to get those folks to look down at these people who choose to get into a condition that makes them dependent on the government and say at some point, "You’re on your own. We may end up taking care of those babies, but we’re not going to take care of you." And we’ve got to start having that serious discussion.

Also in North Carolina, American Idolater Clay Aiken holds a narrow lead in a three-way primary for the District 2 race for the U.S. House of Representatives, in a race that the AP said was "too close to call." Aiken leads former state Commerce Secretary Keith Crisco by fewer than 400 votes. Whoever wins will go up against well-funded Tea Partier Renee Ellmers, who can be expected to put up a tough fight for her seat since she really needs that paycheck and needs to buy her son a new AR-15 to replace the one he allowed to get stolen. As of just before we posted, the race remained too close to call. The best part of the WaPo story on the District 2 primary is this sentence, which is wonderful out of context: "Aiken was outspent by Crisco over the airwaves."

Also also in NC, 20-year incumbent Rep. Walter Jones, who doesn't like owing good American money to "Uncle Chang,"managed to protect his seat from challenger Taylor Griffin, who was running to his right, because maybe Jones doesn't hate teh gheyz enough, who knows? Griffin lost despite an endorsement from some lady from Alaska who quit her job and has been relying on the gullibility of fools ever since.

UPDATE: Hey, how could we forget former drag queen Steve Wiles, who wanted to be in the NC state senate? He lost his primary, badly, but still managed to get 377 votes, or 24% in his small district.

Also, for that earlier post, we copied another website's photo, which was not of Mr. Wiles, but a different drag performer altogether. Here is a corrected photo, which we are pretty sure really is Wiles as "Mona Sinclair." We regret the error.

In Ohio, John Boehner easily won his primary despite opposition from that one guy who made a campaign ad full of dick jokes. The allegedly serious candidate, Froggy Winterbottom, J.D., was fired from his job teaching French at a private Christian college because of the stunt, and is expected to continue to be a jerk. Yr Wonkette wishes him luck in his future endeavors.

All nine of the Congressional incumbents in Indiana won their primaries. Readers who can recognize any of their names are urged to sign up immediately for a pub trivia team. There is some possibility that the 2nd District, currently represented by Republican Jackie Walorski, may be in play in the fall, with Notre Dame faculty member Joe Bock winning the Democratic primary. The Third has often been a swing district, although redistricting has made it more heavily Republican. Can we please please please stop summarizing Indiana now?

And so, to sum up: Boehner and the establishment GOP dudes in North Carolina won their primaries, marking the official end of the Tea Party as a force in American Politics, according to Tom Friedman's taxi driver. This trend, if it continues, may turn out to bad for satire.