Here Is Your Wonkette Fourth Of July Foody And Drinky Open Thread! 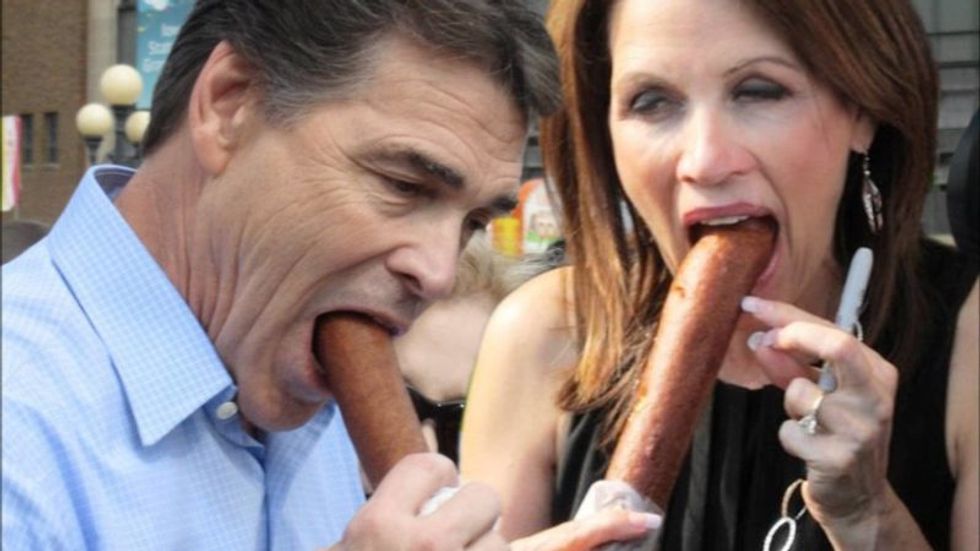 Happy Independence Day, Wonkers! Rather than simply putting John Ashcroft's "Let the Eagle Soar" on endless repeat -- our traditional form of 4th of July torture -- herewith a collection of some classic foods and libations, because damned if we're working today. Be careful with fireworks, keep your pets inside (like really, that is not a euphemism or anything), and watch out for flaming presidential Tweets.

What Is Wonkette Ramming Down Your Throat This Fourth Of July?

Corn dogs. It has come to this, and the devil is dancing tonight!

Corn dogs are the terribleness I was up on Faceborg, drunk, and Trix found me out. I have been dispatched to bring this special summertime delight to Yr Wonket, because this is an urgent, necessary evil. If we are to bear the miseries of this world, we need to be able to tell our poor hearts to live a little now and then.

Almost everyone is one corn dog away from humiliation. It is the food of choice for the hopeless hopefuls. You probably should not have done that, but it’s too late now. TOO LATE.

Can't visit a county fair? No problem! We are taking the low road to perdition from the comfort of our homes. Corn dogs, because all that grease makes everything a little easier to swallow. Here is how you do it:

Oil, for deep-frying (I used a mix of corn and coconut oil)

* There are eight hot dogs per package -- one for each of your fingers, so you can hang on by your thumbs.

This whole deal should take no more than a half hour.

Mix the dry ingredients, beat in the eggs, and then add milk. Mix well and pour the batter into a tall glass. Wipe off the wieners, because this helps the batter to stick. Execute the immersion process for each, place in hot oil, frying three or four at a time. Cook until golden brown. Serve on skewers and eat as many of these as you possibly can with mustard, spray cheese, or mustard and spray cheese. This is your exit. There is no other way out.

Doesn't this look delicious? Boy, oh boy. Take THAT you bunch of organic-only, GMO-haters. I just batter-dipped your worst nightmare and ate it off a stick. Whoopee, science is FUN!

Eat with caution away from any recording devices. I ain't fooling around here -- this isn't some kind of Bloody Mary in the bathroom mirror nonsense. No good ever comes from eating one of these where you can be seen. Still, absolutely no one can stop you from shot-gunning the spray cheese straight from the can.

The sidecar is a beverage steeped in controversy. The creation lore is murky. The ratios are not widely agreed upon. Bartenders cannot decide whether to serve it with ice or strained. The only part which is accepted by nearly all is the ingredients -- brandy, orange liqueur, and lemon juice.

The drink was invented in Paris during World War I. A military officer really enjoyed them, and he rode to the bar in a motorcycle sidecar, which lends its name to the cocktail. The nationality of the officer is unclear. Some say he was French; others claim American. More still say it was a British officer. None of that really matters, though, because it is a delicious and boozy drink.

Right about now you're thinking, "If it was invented in Paris, using French spirits, why does it have an English name?" That's an excellent question. The answer is because the British, Americans, Canadians, and Downundertonians arranged so that it wouldn't have to have a German name.* (Also, too, the French word for sidecar is "side-car.")

Juice of one lemon

Shake all the ingredients together with ice.

Pour into a rocks glass over ice.

*If you don't like that joke, go tell it to your grandfather; he'll love it. Or just go fuck yourself.

There you go! Food (at least nominally) and booze! Also, a true "blast from the past," by Juli Weiner!

In a few Thanksgivings, everyone will be eating First Gentleman Todd Palin's killer "Baked Alaska" pot brownies for dessert. This is the plot of the movie 2012 [Prediction has not yet come true. Thanks for small mercies -- ed.]

Someone buy brownie mix. Tell whatever friend who lives closest to the 7-11 to pick up some brownie mix, they probably sell it there. If not, don't be a little bitch about it just drive two blocks to the supermarket. Jesus Christ. Anyway, so you have the brownie mix right? And then you should have already gotten pot. Call your other friend, the one know knows how to make pot brownies. Tell him to come over, bring his copy of Planet Earth: Jungles and also uhh, season one of that show that everyone likes.

You're playing host, so it's not like you even have to do this, but move a few six packs from the basement to the garage or on the deck so they're cold by the time the brownies are finished.

God they are taking for fucking ever.

Some time passes, you'll need to think of an activity but do not watch the DVD because that is for later. And finally, yes, done. Enjoy the brownies. They do not taste like pot at all, whoever did this did a really awesome job. Definitely plan on finding out the recipe at some point.

Just leave the plates on the table, don't worry, Sarah will get them later.

Oh, yes, and how could we forget?

OK, it's your OPEN THREAD. We'll be back tomorrow, assuming World War Trump doesn't break out.

You love Yr Wonkette, and you want us to thrive, yes? Click that there "Donate" clicky and you'll never have to hear John Ashcroft sing again. Or maybe you will!