Here, White Racists, We Found Some Black Racists For You 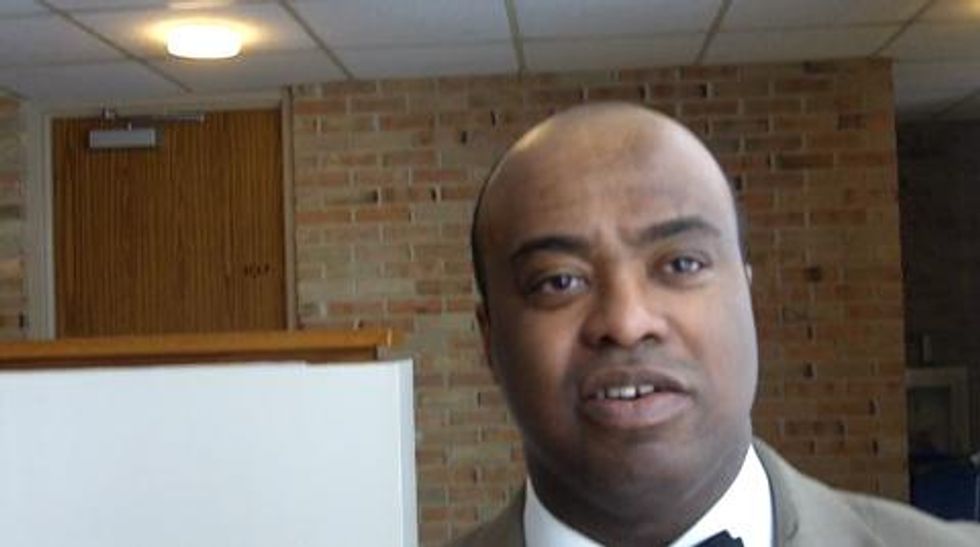 Everybody knows there is only one kind of racism, and that is black-on-white racism. But -- here's a noggin-scratcher -- what if black people are racist ... AGAINST BLACKS??? Can we get a ruling, Ghost Andrew Breitbart?

Rachel Jeantel is the young woman who was on the phone with Trayvon Martin when George Zimmerman followed him, confronted him despite police dispatchers' warnings, and shot him to death. Perhaps you watched Jeantel on MSNBC all week, being alternately grilled and amusingly condescended to by Zimmerman's defense attorney -- the one whose daughter celebrated on Instagram their triumph over "stupidity."

Jeantel is not a polished girl; she's not adept at code-switching; and Ben Shapiro at Ghost Andrew Breitbart's Internet Circle of Hell had a lot of fun last week calling her illiterate.

But oh man, that is nothing compared to what the "black conservatives" of "Project 21" are saying about her. Get ready for some black on black violence.

An email press release from the group:

While the George Zimmerman trial moved on to other witnesses, people are still talking about the dramatic cross-examination of the late Trayvon Martin's friend Rachel Jeantel. Stacy Swimp, a member of the Project 21 black leadership network, said the demeanor and language exhibited by Jeantel on the stand "was a clear manifestation of the cultural perversions that are normalized throughout many of our urban communities."

Swimp suggests that, rather than criticizing Jeantel's actions, Americans should be reaching out to urban communities to "promote spiritual revival" and help teach residents of the inner-city about things such as morals and fiscal literacy.

In the wake of Jeantel's testimony, the hop-hop web site Global Grind published an essay by Rachel Samara that praised Jeantel for being "unapologetically herself" and that the lawyers in the case (on both sides) "have an extreme disconnect from her reality." This disconnect implied that the usage of terms such as "creepy a-- cracker" toward Zimmerman were cultural and appropriate, as well as Jeantel's eye rolls and calling a line of questioning "retarded."

Call a spade a spade and a creepy-ass cracker a creepy-ass cracker, our grandmamma always used to say (no she didn't). Also, it is not nice to call things retarded anymore, a lesson your Wonket learned some time ago. BE NICE RACHEL JEANTEL. Even when lines of questioning are undoubtedly ... ummm ... fiscally illiterate?

Project 21's Swimp understands the "disconnect" that Samara wrote about, but does not think it is something that should be accepted, much less praised. Instead, Swimp is appealing to conservatives to reach out to inner-city communities to help teach conservative values to areas he thinks are ripe for new perspectives.

While watching the testimony of Rachel Jeantel during the Zimmerman trial, my heart broke.

Despite my sadness, I was also angry. I am still angry because it would seem that someone brought this girl into the world and allowed her to grow up essentially without an education or manners.

Goofus rolls his eyes and calls things retarded. Gallant sends out press releases calling 19-year-old women spiritually bankrupt, without manners or education, fiscally illiterate, and an embarrassment to every person of color in the universe.

Someone had very low expectations for her.

It was a clear manifestation of the cultural perversions that are normalized throughout many of our urban communities.

I see this day in, day out where I live.

When she said that the term "creepy a-- cracker," a term she said the late Trayvon Martin used to describe George Zimmerman, is not racial, she sounded very sincere and serious.

Right. Because she was referring to Zimmerman giving off a whiff of "creepy-ass white kill-my-neighbors cracker" is we believe the actual quote -- and we would like to note that serial killing is a "cultural perversion" very rarely found in the black community! (Good job, black community!)

This speaks to the low standards, as well as the low expectations that appear normal to her environment.

To be so accepting of such a hateful and racial term, and to imply it is a normal part of the lexicon used by herself, her community and Trayvon Martin is regrettable.

"Cracker" is the worst slur the world has ever heard; "kill my neighbors cracker," though, is, come to think of it, A TRUE STATEMENT OF FACT.

Ms. Jeantel's testimony and what it revealed really ought to give us a greater sense of urgency, as ministers of the gospel and as conservatives, to get into these communities to promote spiritual revival along with English, morals and constitutional and financial literacy.

If we don't see very clearly from this young woman's behavior just how bad things can be, we just don't want to see it at all.

I pray many of my conservative peers will motivated by what I saw to go and sign up to be mentors to young girls like Ms. Jeantel, to help them grown in literacy and personal dignity.

Dignify this, you pompous asslicker.

Project 21 was formed in 1992 when the riots following the verdict in the Rodney King case revealed a need to highlight the diversity of opinion within the black community. For over 20 years, the volunteer members of the Project 21 black leadership network have provided conservative and free-market perspectives that, until that time, were largely unknown or ignored by the establishment media.

During the course of the Zimmerman trial, which is being heard in the Seminole County (FL) Circuit Court, Project 21 members will provide commentary and be available for interviews about the case and the issues surrounding it. Project 21 will issue regular press releases featuring quotes from its members on the breaking news about the trial and any controversies surrounding it.

Now, we had the trial on for much of the week, but in the background, so we may have missed all the cultural perversity exhibited by Ms. Jeantel, as well as when she showed off her spiritual starvation, poor morals and fiscal illiteracy. (We definitely saw the eyerolls -- BURN HER.)

Is fluency in standard English a good thing? Yes! Is the propensity of some black kids to hound high-achieving students for acting "white" a bad thing? Also yes! Is Stacy Swimp just mad because he got made fun of constantly for being SUCH A NERD?