Here's A Sexxxy Song About Being An Outlaw For Jesus. You Should Fap To It. 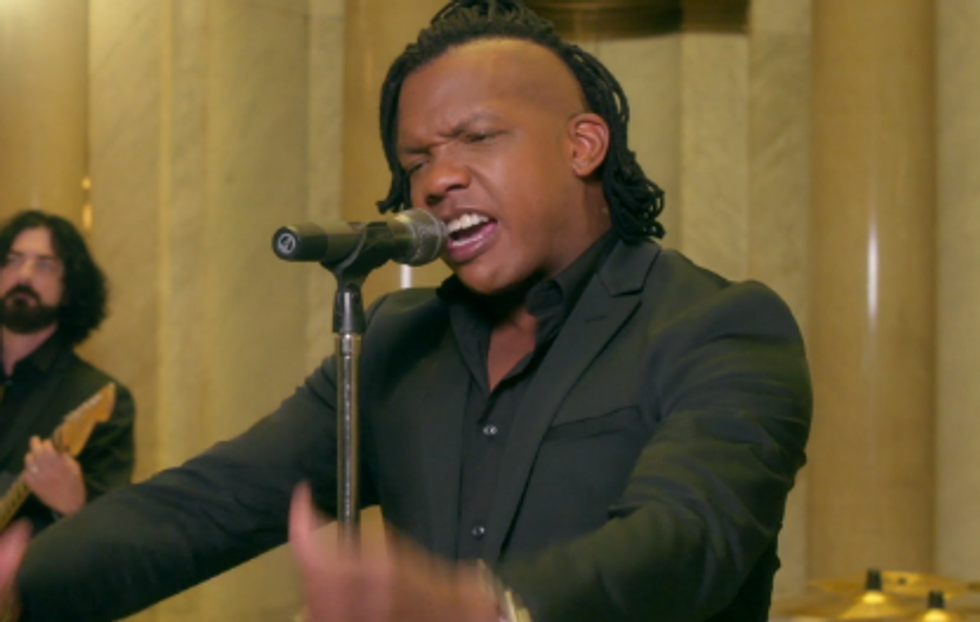 Some kinda Jesus dance that SHOULD be illegal, bro.

FACT: Christianity is illegal in the United States of America. Have you never heard of Kim Davis or Mike Huckabee?

FACT: That first fact is total bullshit, but you know how fundamentalist Christians are. Every single time they're forced to act like decent citizens, they start crying about persecution.

FACT: There is a new evangelical Christian porno flick coming out next year! It is called "God's Not Dead 2," because we guess it was fun for God to not be dead the first time! It stars Sabrina The Teenage Witch, reprising her role as Clarissa Explains It All. Just kidding, Clarissa (Melissa Joan Hart) is playing "a high school teacher who quotes the Bible in class and gets sued by a student ... who believes in this silly idea called 'separation of church and state.'" Wow! This is a very plausible plot, which happens every single day in America! (If you believe this happens every single day in America, you are a dumb cousin-fucking hillbilly who needs to get a brain, MORAN.)

When did it become breaking a rule to say your name out loud in school?

If serving You’s against the law of man, if living out my faith in You was banned, Then I’ll stand right before the jury.

If saying “I believe” is out of line, if I’m judged ’cause I’m gonna give my life, I’ll show the world the love that fills me,

Then I want to be guilty.

Hahahahaha OK WHATEVER! Anything you need for your widdle fundamentalist Jebus feelings to feel better! Imagine how these pussies would react if they were ACTUALLY persecuted. And speaking of real persecution, we already mentioned that the song REALLY SUCKS, right? Like SUPER sucks.

So, story time! Newsboys is not a new band to Yr Wonkette. Back in the mid-1990s, two things were happening:

1. We were in high school and we went through kind of an evangelical Southern Baptist-type phase. WEIRD, RIGHT? It's true! We were deeply in the closet and had somehow learned that being gay was shameful and bad, so if we're super-Christian, it'll go away, right? Haha, we'll get back to you after we remove this dick from our mouth.

2. Newsboys didn't suck as hard as they do now. Seriously. They were totally Christian-y and kinda shitty in that Contemporary Christian-sounding "Jesus hates minor keys but LOVES forced key changes!" way, but nowhere NEAR this. Perhaps this is because the original lead singer is gone, and has been replaced by the dork you see above, Michael Tait, who used to be in DC Talk, and who sucks.

Anyway, one time we saw them in concert at Germantown Baptist Church outside Memphis, and it wasn't a bad concert, except for how Jesus's Sexy Moshpit got a little out of control in the Baptist sanctuary and an ambulance had to come because somebody broke their neck or something. DOH! Devil Christian rock music.