Here's Bernie Sanders On The Ellen Show, Talkin' About Handcuffs And Tight Panties 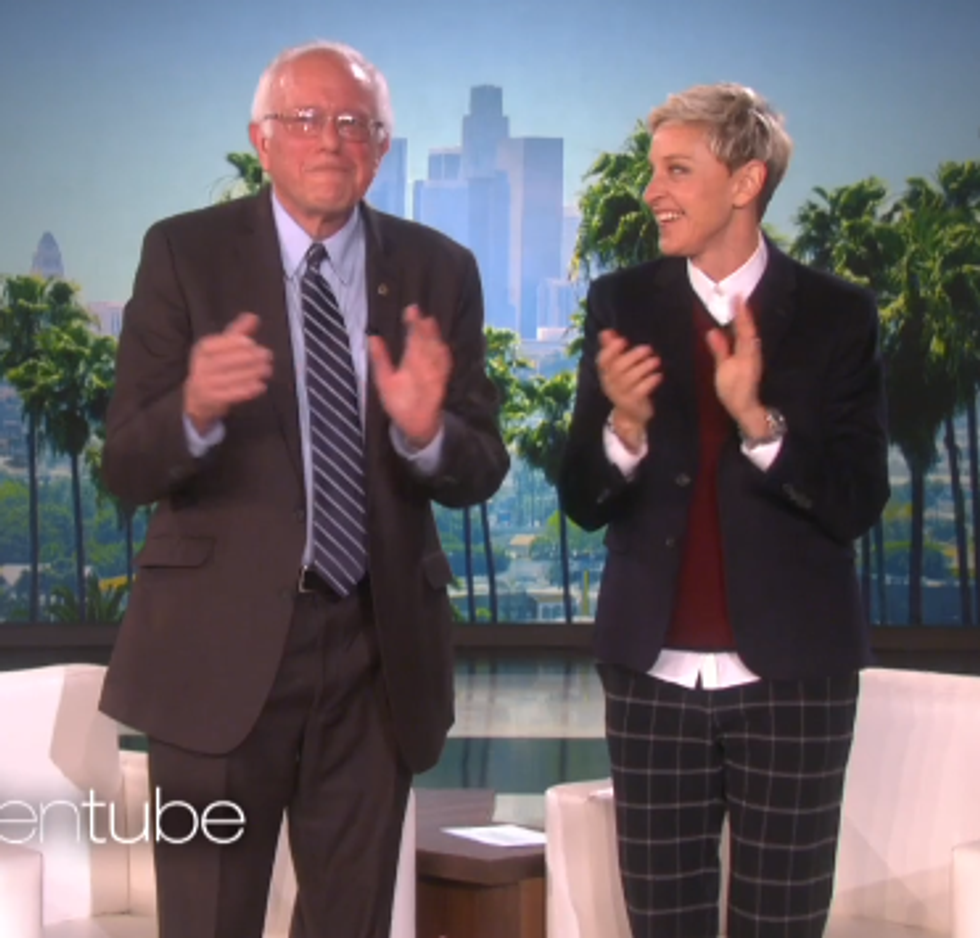 Oh look, Bernie Sanders has a softer side! He's not all GRRRRR! free college and AAAAAARGH! murder Wall Street all the time. Sen. Sanders stopped by the Ellen show, probably because he was still in the neighborhood after Tuesday's Las Vegas debate, and he was adorable! First, here is Bernard dancing, before the show:

Presidential candidate @BernieSanders​ is ready for his entrance onto my show. https://t.co/cxVVL68hzJ

OK, so regardless of who you're supporting in the Wonkette Primary (buy your Bernie T-shirts HERE and buy your Hillary T-shirts HERE! and buy your Larry Lessig panties NEVER), we can all agree that Bernie cut many more rugs before he even went on stage than Hillary did when she was shaking her money maker to the Whip and the Nae Nae on the Ellen program. Of course, it is NOT a fair fight unless Bernie now steps up and does those specific dances. Tall order, we know, because neither of these fools is A Expert at any dance besides the Chicken Dance, awwww, Olds are the cutest.

And then it was time for Bernie to come on stage, at which point he cut at least three more rugs. Take THAT, dancing "pundits" who say "All Hillary needed to do was stand still on the Ellen Show without falling down during the dance-off to maintain her status as the frontrunner of RHYTHM, she obviously won at all the dancing." Guess we won't need a Change.org petition to root out corruption in the Dancing Primary, WILL WE? This clip starts with dancing, and ends with all kinds of serious talk about socialism and stuff, you will like it.

Now it's time for the fun part, where we play Truth Or Dare with Bernie, and if we lose we have to spend seven minutes in the closet doing sex things with Donald Trump. But LAME, Ellen doesn't even give him an opportunity to do dares, and instead he just answers questions about what kind of panties he's wearing (briefs) and whether he's ever been in handcuffs. (Yes, the one time, during a "civil rights demonstration." Is THAT what the 73-year-old Jewish social justice kids are calling it these days? Ellen's face right then is like WHATEVER, BERNIE.)

Also, just wait until you hear which Republican presidential candidate he would MOST like to go on a sexy desert island vacation with!