Here's The Official Catalogue Of Sins, From The Family Research Council 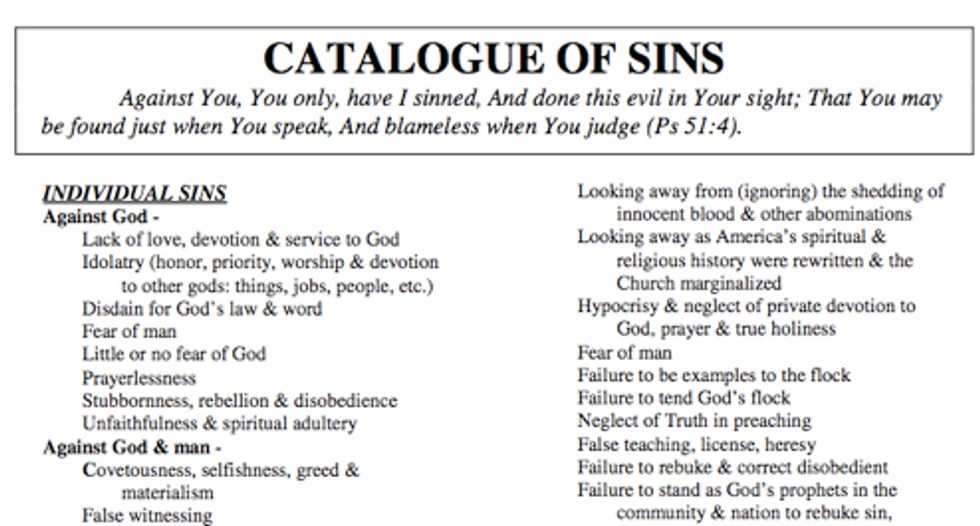 Did you pray like the dickens yesterday, on the National Day of Prayer that Barack Obama hates so much? Yeah, we forgot too. But they say certain corners of Hell have been successfully gentrified in recent decades, so there's always that. Anyway, there'sanother prayer day, maybe, on May 23, and here's the official Catalogue of Sins (PDF) that Jesus wrote on his conservative Acer PC, via the Family Research Council. ("Lifting someone's luggage" is missing! Phew, now that joke's out of the way.) Let's explore the State & National Sins category, cuz it's our beat, right?

Abandonment of God and His Word

as the foundation for civil order

Neglect of stewardship of liberty & Godly

Silent indifference to the imposition of

government despite cost to children

Treasonous barter of American liberty to

Interference and usurpation of parental rights

Violation of the Church & religious civil

Usurpation of parents’ authority by

promiscuity, pantheism (worship of the

the guise of public “education” while

failing to teach fundamental academics or

Thievery via confiscation of private property

under veil of “environmental protection”

Thievery of family wealth via confiscatory

Thievery via confiscatory levels of income

tax & use of tax dollars for evil

Thievery from future generations through

Thievery from all Americans via inflation

Violation of the national covenant with the

people: the Declaration and Constitution

government workers, etc., who are true to

their faith), passage of laws

punishments which do not fit the “crimes”

Imposition of Statism and Socialism in every

Exaltation of State as God, nullifying His laws

& demanding control over areas of life

(including the Church & Family), that

That is Psalms, word-for-word.