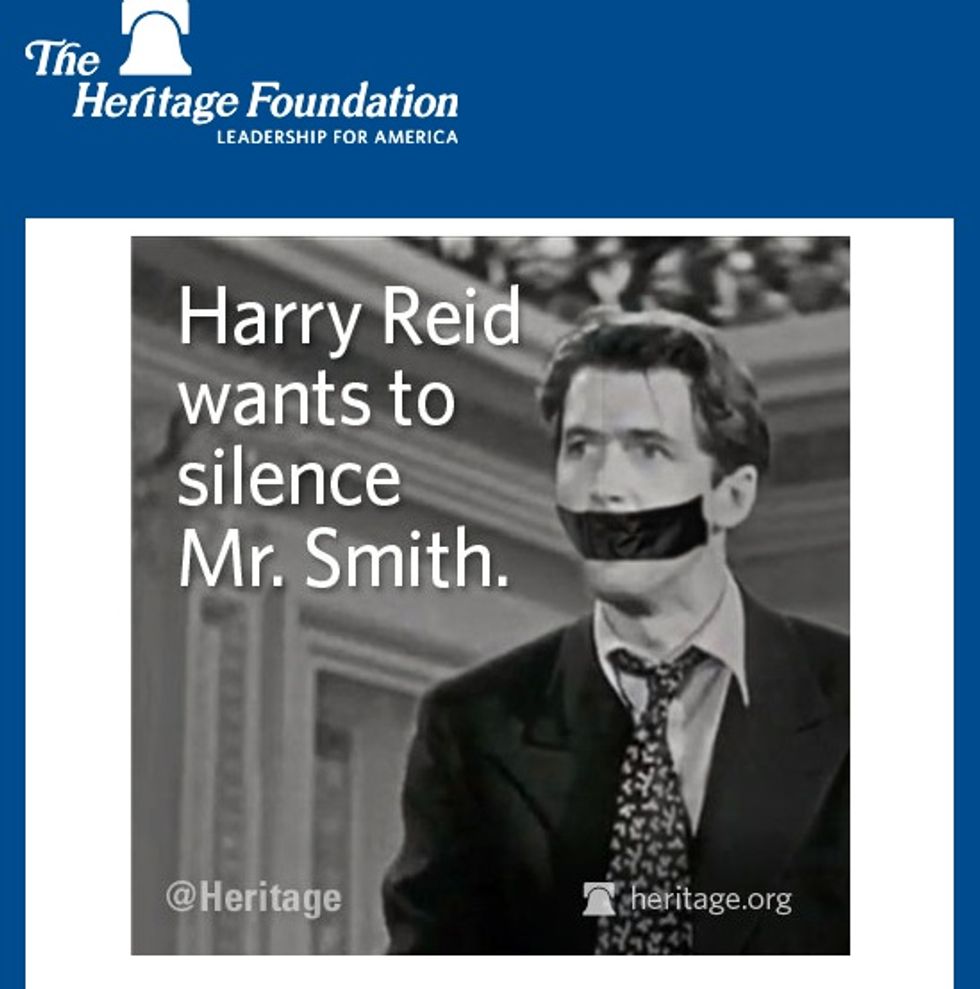 Hey, movie fans! Remember that Frank Capra classic where Jimmy Stewart saves the day by standing up and filibustering a bill he knows in his heart to be bad? Pretty dramatic stuff, and an iconic bit of Authentic American Cornball Political Sincerity. Of course, as we all sorta-kinda know, the rules for filibusters have changed, so instead of One Brave Senator standing up and reading Collected Poems of Leonard Nimoy into the record, the minority party just says "We filibuster thee" and spits three times, and that counts. Senate Majority Leader Harry Reid, seeing all the stalled legislation and spit covering the Senate floor, hopes to bring back Old School filibusters: You want to stop a bill, you gotta stand up and talk.

So above is the Heritage Foundation's invocation of Mr. Smith Goes to Washington, aimed at Harry Reid's proposal to change how filibusters work. We will now pause, class, for you to ponder what is wrong with this picture.

Oh, yeah, right. Requiring future "Mr. Smiths" to stand up and talk like in the movie will actually, uh, silence "Mr. Smith" because then he can't bring the Senate to a halt silently anymore! Harry Reid hates free speech and wants to duct tape Jimmy Stewart's affable corpse!

The Heritage Foundation is so proud of this image that when a reader suggested it was maybe just a little meaningless, they reblogged the comment with a smart answer:

jasencomstock: “We don’t have a case so look, a movie.”

Yes, especially when anyone who's seen the movie knows that image makes no sense! We guess that the Nino Scalia School of Rhetoric is more influential than we thought!

We look forward to the Heritage Foundation's next Tumblr post, featuring a still from the movie Bulworth to argue that Loving v. Virginia was an example of judicial overreach.