Hero SC Lt. Gov. Candidate Will Close All The Public Schools Cause They Ain't In The Bible 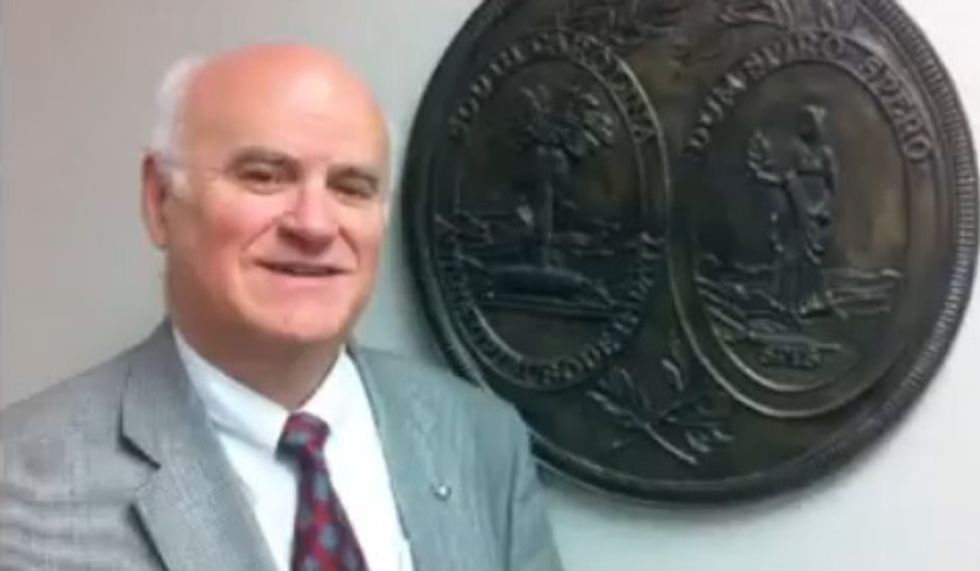 Just in case you were worried that South Carolina might start making a little more sense now that it's beenspared from thermonuclear destruction, here is a story about the latest innovation to issue forth from the Palmetto State: Retired Army chaplain Ray Moore, a candidate for Lt. Governor, has pledged that he will work to end public education in the state, because for most of early America's existence, we didn't have public schools, and now that we do have them, they're on a mission to destroy Christianity. Plus, there's nothing about state-run education in the Bible, so who needs it?

We suppose we could point out that there's nothing about Constitutions, republics (no, we aren't going to say that dirty word "democracy"), or voting in the Bible, either, but that seems a bit gratuitous, doesn't it?

Moore recently urged parents to free their children from "Pharaoh's schools" and either homeschool or send them to private Christian schools, because supposedly 40% of public school children lose their religion by the time they graduate from high school. On the Janet Mefferd radio show Wednesday, Moore explained how the godless government schools could eventually be strangled, not just in South Carolina, but nationwide, because he is a man with Big Thoughts about how America can once again be great. The first step would be an exodus (get it?) from public to private and home schools. Then, he figures once 25 to 35 percent of the school-aged population has been pulled out of the government schools, the states, starved of the money that comes with each butt in a seat, would have to capitulate:

“Then the states would then negotiate, perhaps taking out of their constitution platform, or the provision, that says the state had to provide education, and it would gradually be handed over to churches, families, and private associations,” Moore said. “That’s the way it was for the first 200 years of American history.”

Hey, you know what other institution we had for the first few hundred years of American history? Moore also blamed "Unitarians and socialists" for the invention of public schools "in the 1840s in Boston," which kind of ignores the existence of public schools and compulsory (for boys anyway) education in New England going back to the 1600s, but what's a couple hundred years when you're making a point?

You see, what we need to do, says Moore, is that

Presumably we should also close hospitals and rely on prayer and casting out of demons for healing, because is there a single word about hospitals in the Bible?

And even though a lot of people seem to like public schools, this is merely a delusion that we can do away with, because honestly, the majority of South Carolinians are Christians, and therefore agree with Ray Moore:

“We’d have a lot of those who don’t want to be in religious schools, but when you’ve got 70 percent of the population in South Carolina still in a Christian denomination -- we’re the majority, and we are being abused, coerced, and imposed upon by these pagan atheistic public schools, and it’s just got to stop."

The others can go find a private secular school, at least until we get the First Amendment returned to its original form, which allows all Americans to attend the Christian church of their choice.

The shades of Colonial education advocates Benjamin Franklin and Thomas Jefferson, contacted for comment during a séance, were reportedly incapable of more than heavy sighs and muted sobs.

Follow Doktor Zoom on Twitter. He predicts this week's Sundays With the Christianists is likely to be extra-ragey.