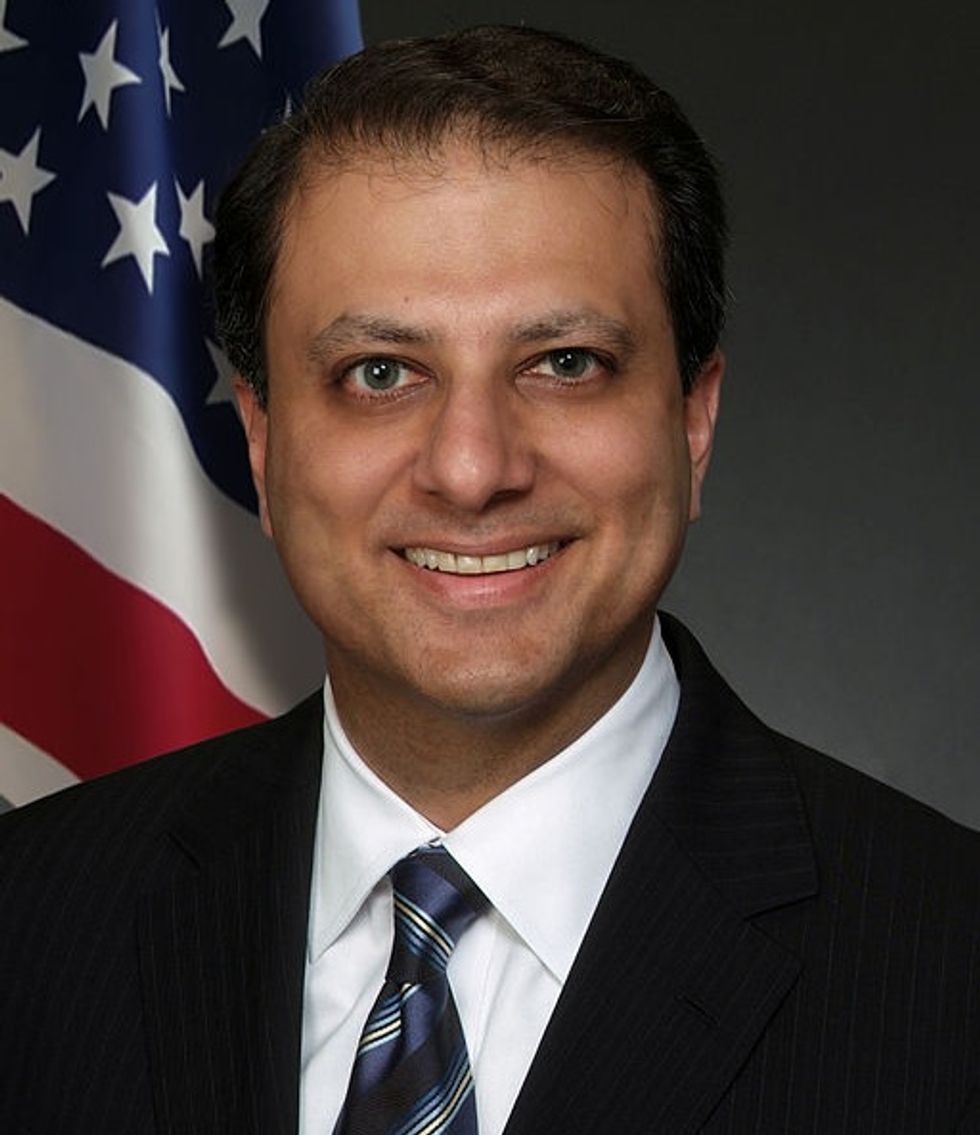 In its characteristically subtle way, the Trump administration suddenly demanded the resignations of 46 U.S. attorneys appointed by Barack Obama. It's not unusual for new presidents to clean out the prior administration's U.S. attorneys, but unlike Trump's mass dismissal late on Friday, it's usually only done once the president has appointed replacements for the Senate to confirm. But if Trump respected norms of presidential behavior or common decency, we'd have a functioning executive branch (not to mention his tax returns), and what fun would that be? But one attorney, Preet Bharara, the U.S. Attorney for the Southern District of New York (despite appearing in almost every story about him, "crusading" isn't actually part of his title), is apparently planning to withhold his resignation and force Attorney General Jeff Sessions to fire him, according to multiple reports.

We can't say we blame him; for one thing, Trump had personally asked Bharara to stay on shortly after the November elections, and according to a "federal law enforcement official" who spoke to The Daily Beast, Sessions had assured Bharara in a phone call earlier this week that he'd remain in office. Yep, that sounds about like how these jerkoffs operate. So now that Bharara is among those told to pack their things, he's apparently decided to say "Make me."

Since receiving the letter demanding his resignation Friday afternoon, Bharara has yet to speak to the press or to his full office. Friday evening, the law enforcement official said, Bharara told his section chiefs that he’d yet to submit the requested letter and may instead challenge Sessions to fire him.

The New York Times adds Bharara has told associates he's not planning to submit his resignation any time over the weekend, either, although as of yet he's made no official statement to the press or staff. The guy seems to be under the impression that what Donald Trump promised in November might still matter in March. Administration officials are also not saying anything about how they're planning to deal with Bharara; presumably, Donald Trump will fire him over Twitter.

Bharara is a busy guy, and his office has a number of ongoing investigations that could be disrupted by his sudden departure, including an investigation of fundraising by New York Mayor Bill de Blasio, a case against former aides to New York Gov. Andrew Cuomo that's just about to go to trial, and a reported investigation into whether Fox News informed shareholders of settlements made between the network and women alleging sexual harassment by former CEO Roger Ailes. Bharara has also gone after corruption on Wall Street and the Russian Mafia -- as of September, his office was still working on a case involving the Russian mob, which, HOO BOY it's a dilly! Russian mob? Trump? Probably nothing to get all worried about.

So far, it's not clear whether the abrupt cleanout of U.S. Attorneys is anything more than the usual Trump administration chaos -- doing normal things in the most abnormal way possible -- or whether there's something stinky here, which is always a good assumption with this bunch. We'll try to pretend we're surprised in a week or two if news drops that this was more than business as usual. A Trump administration official told Politico everything was normal, just ducky:

“Been in the works for awhile. Decided to pull the trigger today,” said one senior administration official.

“We were always planning for it on about Day 50,” this person said.

The unnamed source went on to explain, everything was under control, situation normal, just a slight weapons malfunction, but "everything's perfectly all right now. We're fine. We're all fine here now, thank you. How are you?" before suddenly shooting their phone and muttering "Boring conversation anyway."

Even if the Friday Night Massacre was simply the president exercising his prerogative -- U.S. Attorneys definitely serve "at the pleasure of the president," a phrase we'd just rather not think about in reference to Trump -- the way it was handled was rude and awful, just like everything else Donald Trump does, said the federal law enforcement who spoke to The Daily Beast.

“Everything these people do is a Saturday night massacre. Remember the ambassadors?” the law enforcement source said, referring to Trump’s early January decision as president-elect to boot all politically appointed diplomats from their posts by Inauguration Day, even before most of their replacements were lined up.

“It’s such a lack of basic fucking decency and civility. They don’t see anyone as human beings; it’s horrifying.”

That person definitely isn't wearing a MAGA hat, and it looks like Preet Bharara forgot to wear his, too. Get ready for another interesting week, kids.