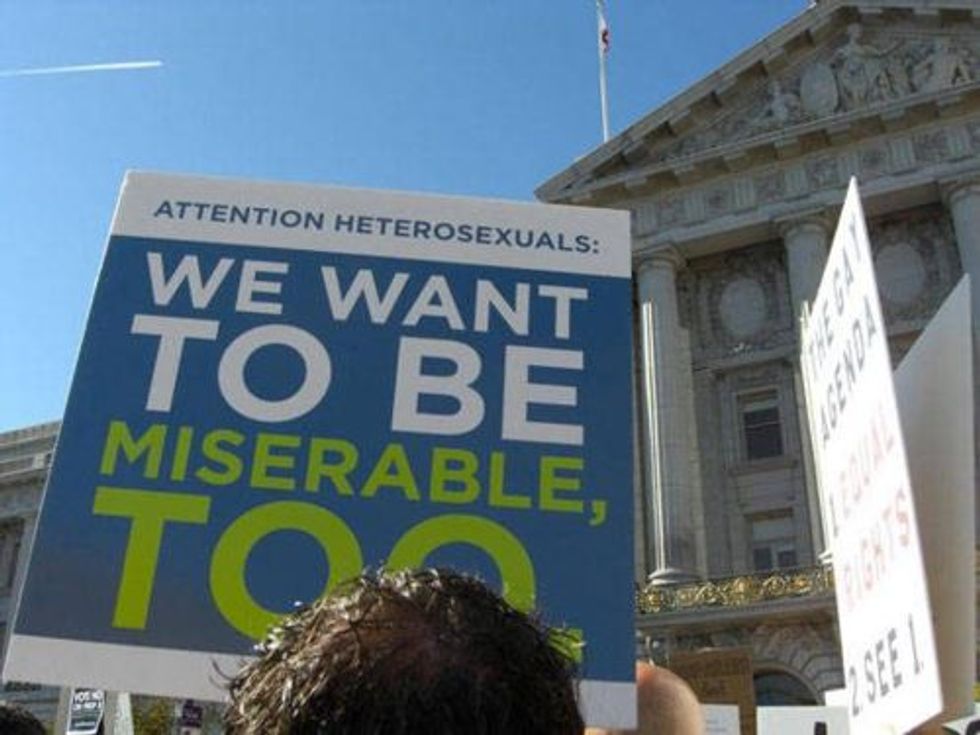 Well how's this for a study in contrasts? Wingnut opponents of marriage equality in Utah are calling for defiance to the tyranny of the federal judiciary, because as we all know states can ignore federal judges, under the time-honored legal principle of "I read it on the internet, this will definitely work." One guy is going tostarve himself until Utah stops issuing marriage licenses to same-sex couples, and another group, who may or may not be a bunch of law enforcement officers, is talking about a little bit of uprising because the Constitution barely even recognizes the power of the federal government. See? There really is a lot of diversity among the wingnut community.

Also not clear: Now that the Supreme Court has issued an injunction halting further gay marriages while the case is on appeal, will these guys insist that the state ignore that as well? We are thinking probably not.

In the Provo suburb of Highland, former Provo cop and Arizona sheriff Richard Mack, who's now big with the "state sovereignty" crowd, held a meeting of the "Constitutional Sheriffs and Peace Officers Association," which says it is an actual group of law enforcement officers -- and is at the very least a fun vanity project for Richard Mack -- at which Mack spouted the usual "county sheriffs are the most important law enforcement peoples in the Constitutition" arglebargle, for Liberty:

“The people of Utah have rights, too, not just the homosexuals. The homosexuals are shoving their agenda down our throats,” Mack said.

More to the point, the federal government has no authority whatsoever to overrule Utah's ban on gay marriage:

After all, there are certain unalienable rights against throat-cramming, which he just can't stop talking about, and also the 10th Amendment is a much shinier amendment than the 14th. And of course, he says that all that's needed to restore America's precious esophageal autonomy is for county sheriffs to stand up to federal judges:

"The way you take back freedom in America is one county at a time. The sheriffs need to defend the county clerks in saying, 'No, we're not going to issue marriage licenses to homosexuals[.]'"

And then there's the hunger striker, a gentleman named Trestin Meacham, who is taking an entirely more literal approach to not letting anything be put down his throat. He is a former losing candidate for the state senate on the Constitution party ticket, which is a sure indicator of loon status. Like Mack, Meacham truly sincerely believes that states have the right to nullify any federal laws or judicial rulings they dislike, because it's not like we had a civil war over that question or anything. He says it's "completely pointless" for Utah to even bother appealing the federal court ruling that threw out the state's ban on same-sex marriage, because after all the courts are "packed full of activist judges that don’t listen to the Constitution."

And so he's going to not eat anything, saying that he's just like Gandhi, who certainly seems like exactly the fellow you'd want to emulate if you're into saying that certain classes of people should be denied equality.

All in all, it was a very productive weekend for defenders of the Imaginary Constitution. Should you encounter any of these folks, it is recommended that you back away slowly, nodding and smiling; under no circumstances should you show them a flag with gold fringe, as it may provoke them into a frothing rage.