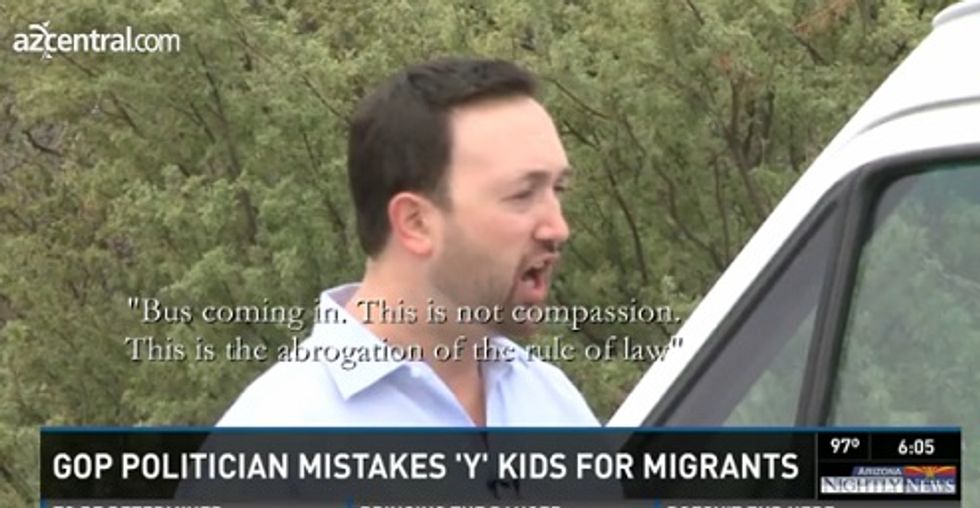 Between the ongoing child immigrant crisis at the border  and the fact that all House of Representatives seats are up for grabs, our cup of derp really does runneth over so hard. There are the incoherently angry poor spellers. There is Breitbart's House For The Endlessly Petulant mistaking a soccer jersey for an evil Muslim prayer rug. All those idiots should stand aside, though, because GOP state legislator and Arizona congressional candidate Adam Kwasman is here to put them all to shame with his touching concern for the busload of terrified migrant children he saw, a concern made all the more touching by the fact that what he saw was actually a bus full of good old 'Merican kids on their way to YMCA summer camp.

Kwasman had just raced up to Phoenix Tuesday morning from the protest in Oracle over the expected arrival of dozens of migrant children at a shelter.

He had tweeted from the scene, "Bus coming in. This is not compassion. This is the abrogation of the rule of law." He included a photo of the back of a yellow school bus.

He's so into that "rule of law" phrase, and he very clearly just learned the word "abrogation" that he decided to use it in a teevee interview as well. Why not watch this video so you can see his chinless face meant for punching mouth some words? We promise it will be worth it.

"When you abrogate the rule of law and start picking and choosing how to follow laws, you're going to have a terrible result. I was actually able to see some of the children in the buses. The fear on their faces. This is not compassion. When you have a rule of law, and a secure border and a citizenship and nationalization process that works, you don't see this. It's a very sad sad state of affairs that we have right now."

After letting Kwasman grimace painfully at the microphone for awhile, contorting his face into something that he likely thought looked like concern but actually just looked severely dyspeptic, the teevee interviewer guy asked, with barely suppressed glee, which children were on the bus.

"I saw a bus with plenty of children on it, so I'm assuming that was a bus that was moving through."

Yes, because there is literally never any other reason on earth for groups of children to be in school buses except to be bused, en masse, to migrant shelters. Then the teevee fellow got to experience the undoubtedly sublime job of asking Kwasman if he knew that it was a bus full of local schoolchildren headed to a YMCA camp, not a terrifying brown child relocation plan. And they were met by people screaming at them to "go home" and get out of America. That might explain the "fear on their faces," all right.

"I apologize. I didn't know. I was leaving when I saw them, so if that was a school bus, people were not happy down the line. That's an error by me."

People were not happy about school buses? Or the school children weren't happy? We're so confused, but not as confused as Adam Kwasman. Truly, his backpedaling is a thing of flailing beauty. Oh, and the bus full of brown illeeeeegle kids? Nowhere near there yet, sporto.

And while the "Y" kids showed up, the bus that Kwasman and other protesters were waiting for -- packed with migrant children -- won't be going to the shelter today, according to the U.S. Department of Health and Human Services.

We have no doubt that when the bus really does arrive, Kwasman will be right there to wince at it and try desperately to work "abrogate" in all over again, like a real goddamn American hero.