Hey, Did All You Woman Protesters Pick Up Your George Soros Checks Yet? 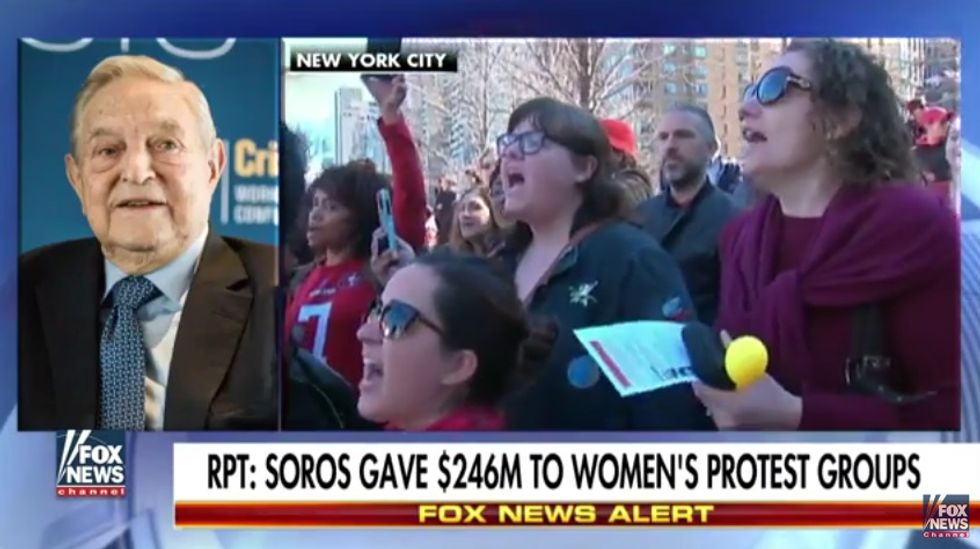 Here's the hot new pile of crazy going around the Wingnuttosphere -- or at least the hot new recycled version of some bullshit from January: Did you know that scary leftist billionaire George Soros was the mastermind behind both the Women's March on Washington and Wednesday's 'Day Without a Woman' protests? The breathless reports do their very best to suggest no actual women really planned the things -- they were all just dupes of Soros! You knew that already, of course! It's right there in the very carefully phrased Fox News Headline, which misleads without exactly lying: "'Day Without a Woman' supporters got $246M from Soros." See? He paid for the whole thing! Hope you remembered to pick up your check!

Except, of course, he didn't pay for the marches all by himself, and Fox, at least, is only careful to imply he did. If you read down a few paragraphs, you learn this equally shocking fact:

Of the march's 544 partners, 100 groups received funding from Soros that totaled $246 million, according to the conservative Media Research Center. Such groups included Planned Parenthood, the Center for American Progress and People for the American Way (PFAW), the report claims.

So, yeah, a guy who gives tons of money to groups he likes gave money to groups that were listed as "partners" of the march, at some point during the last year. There's not even any evidence Soros gave a penny to organize the march directly, though heaven knows donations are fungible, so it was absolutely a "Soros-funded march," the same way Wonkette readers paid my cable bill this month since you bold fresh pieces of humanity donate to support the site, and I pay my cable bill with my salary.

Still, Fox contributor Rachel Campos Duffy managed a fine rant about why George Soros is personally paying all these women to march for him, which they otherwise wouldn't do, because they are mindless sheep, baa-baa-baa:

This march was not really about "women's rights" or "equality for women" [you can hear the scare quotes! -- Dok Z] because if it was, I think we would have seen the march move to the front of the Saudi Arabian Embassy. You have to ask yourself why would a billionaire like George Soros fund all these organizations behind it? The reason is he's had a lifelong dream of one-world government, of elites redistributing wealth and setting up rules for the rest of us, and the biggest existential threat to the advancements he's made through his investment of President Obama and also his investment in the Hillary campaign, which he didn't get a lot out of, is Donald Trump. Donald Trump is the biggest threat to any of the advancements that the Obama made [sic] in advancing his idea of a one-world government.

Token liberal Margaret Clifton didn't even bother challenging the implication that George Soros had personally funded the women's marches, but instead said it only made sense for someone who supports social justice causes to support the marches, which is true enough, but also conveniently played into the Fox narrative that Soros was somehow behind it all. And then the segment went on to explain how women around the world have it a lot worse than American women, and if George Soros really cared about women, he'd be fighting against Sharia law, dammit. Also, said Duffy, almost all the funders and board members of "these groups" that are supposedly supporting women's rights are really men, so what hypocrites those ladies are!

Then we got a question that went right to the heart of these protesters' hypocrisy: If Hillary Clinton had won the election, do you think we'd see the same kinds of protests? That's a stumper, all right. We're guessing that in the alternate universe where Hillary Clinton is president, there probably were not a lot of women out protesting her Muslim ban, her threats to eliminate the ACA and to defund Planned Parenthood, or her appointment of cabinet members who want to dismantle the agencies they're allegedly leading. Call it a hunch.

The Fox News story, and lots of rightwing blogosphere pieces, all cite a "study" from Brent Bozell's Media Research Center (MRC) about Soros's financial support for "100 of the 544 Women’s March partners," which is accurate only in the broadest sense, as we've explained. The MRC piece does at least note,

The liberal billionaire didn’t fund the Jan. 21, 2017, march directly. He had already given nearly a quarter of a billion dollars to 100 groups partnering with the march.

Funny how that disclaimer never made it to the Fox News report, or to any of the wingnut blogs which insisted Soros wasn't merely funding groups that also partnered with the marches. After the Women's March on Washington the day following the inauguration, several righty blogs pushed the claim that protesters were paid with Soros cash, a notion Politifact shot down as "Pants on Fire" back in January. But with very careful phrasing, the claim lives on (with plausible deniability) on the right. It's just so obvious George Soros is the real power behind these dumb angry women: Soros gave money to Planned Parnthood and to the ACLU, and those two groups also were listed as "partners" of the Women's March, so how many more dots do you need to connect?

OMG, guys, we just realized something: WE have given to Planned Parenthood and the ACLU, too! Cue the headlines: WONKETTE IS GEORGE SOROS!

Yr Wonkette is ad-free, but until George Soros comes through for us, we depend on generous donations from readers like you. We appreciate it, and we'll let you know how that one-world government thing is coming along.