Hey, What If The CEO Of Exxon Becomes Secretary of State? What Could Possibly Go Wrong? 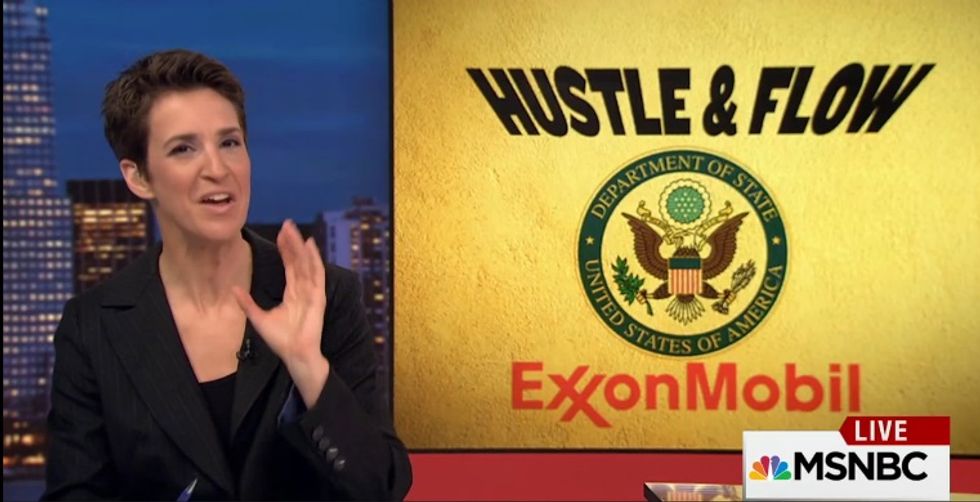 So, in among the nine million possible candidates for secretary of State is one new name that Rachel Maddow thinks hasn't gotten nearly enough attention: Rex Tillerson, the current CEO of Exxon Mobil. Donald Trump likes him enough that when Matt Lauer was trying to get Trump to talk about whether Mitt Romney is still on the list, Trump suggested that Lauer really should ask about Tillerson -- which Lauer wasn't all that interested in doing. Watch this clip from Wednesday's Rachel Maddow Show (above) and see if you don't find yourself more than a little bit nervous about a conflict of interest that could almost eclipse Trump's: Tillerson signed what would have been a $500 billion oil exploration deal between Exxon and Russia's state-owned oil company, Rosneft. That achievement won Tillerson Russia's top honor for foreigners, the "Order of Friendship" -- awarded by Vladimir Putin, not Princess Twilight Sparkle. The oil deal fell apart when the U.S. imposed sanctions on Russia following the invasion of Crimea. Hey, what might happen to those sanctions if the guy who signed that $500 billion (with a b) deal got confirmed as secretary of State?

Oh, should we mention that, in his adult life, Mr. Tillerson has never worked anywhere but Exxon?

Say hello to the new kleptocracy, kids! How bad would Tillerson be as Secretary of State? Bad enough that even WaPo's Jennifer Rubin says Tillerson just might be "among the worst, the most preposterous, contenders" for the job.

We know you Wonkers sometimes don't want to watch the videos, because they include terrible people. You need to watch this jaw-dropping video.