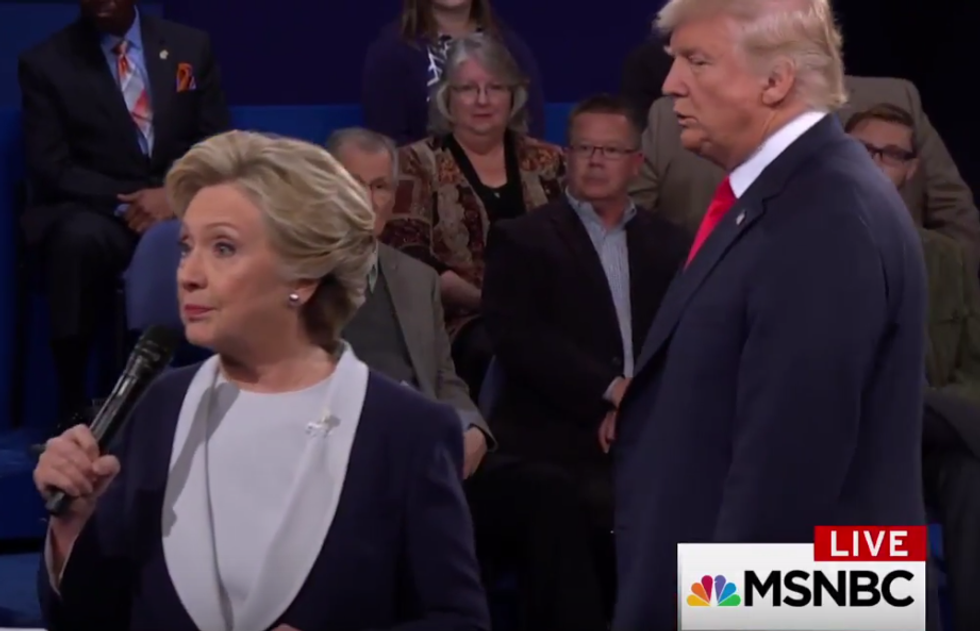 Hooray, we have excerpts from Hillary Clinton's new book! Now, some (sexist) Americans are pretty sure Hillary should just go away and not write words or go out in public or do anything to remind us she exists, especially since she has the audacity to suggest that external factors like Russian interference and James Comey's famous flaming turd of a letter ELEVEN DAYS before the election might have contributed to her loss. Why won't she just admit that she only won the popular vote by three million, yet barely lost in the Electoral College, because she is a yucky shrill lady who compulsively makes secret speeches about Benghazi to Goldman Sachs through her disgusting email server?

But back here in the real world, we're excited to read What Happened, Clinton's frank account of No, For Real, What The Hell Happened in the 2016 election. You can pre-order the book and hear the full excerpts if you click right here (or just watch the "Morning Joe" video below, at least until it gets yanked). One is her author's note about why she wrote the book, and the other is her account of that debate where Donald Trump stalked her and breathed all over her like the disgusting pig man he is. She struggles with the question that has always dogged her, the damned if she does, damned if she doesn't conundrum that's been a part of her political life since the beginning:

This is not OK, I thought. It was the second presidential debate, and Donald Trump was looming behind me. Two days before, the world heard him brag about groping women. Now, we were on a small stage, and no matter where I walked, he followed me closely, staring at me, making faces. It was incredibly uncomfortable. He was literally breathing down my neck. My skin crawled. It was one of those moments where you wish you could hit pause and ask everyone watching, "Well, what would you do?" Do you stay calm, keep smiling and carry on as if he weren't repeatedly invading your space? Or do you turn, look him in the eye, and say loudly and clearly, "BACK UP, you creep. Get away from me. I know you love to intimidate women, but you can't intimidate me, so BACK UP."

I chose Option A, I kept my cool, aided by a lifetime of dealing with difficult men trying to throw me off. I did, however, grip the microphone extra hard. I wonder, though, whether I should've chosen Option B. It certainly would have been better TV! Maybe I have over-learned the lesson of staying calm, biting my tongue, digging my fingernails into a clenched fist, smiling all the while, determined to present a composed face to the world.

Uh oh, don't look now, but Hillary Clinton is saying she might have made a mistake! She's apologizing! (Because she always has to apologize for everyfuckinglittlething, even when she's saying completely true things.)

Of course, what would have happened if she had told Trump off in that debate? PICK US, WE KNOW! We would have had to deal with one-thousand hours of "both sides" TV from Chuck Todd, Mark Halperin and various and sundry other motherfuckers who inexplicably make more money than we do, talking about what an ANGRY LADY moment she had, which would have inevitably led to thinly veiled sexism about whether she had the EMOTIONAL LADY COMPOSURE to be president.

Jesus Christ, do you all remember what it was like during the 2008 Democratic Primary, when Hillary Clinton accidentally shed a tear in New Hampshire? She was obviously crying for conniving political reasons, because it's not possible she's an actual living, breathing human being, is it? "Fuck no," said Maureen Dowd, as she set to chomping on her morning pot brownie and started writing her column that day.

God, the American media sucks sometimes (most of the time).

Anyway, good book-writin', Hillary Clinton! We will probably read it twice, once while crying and then again in a few months just because we LIKE HER.

Wonkette is fully funded by lovely souls like you! If you love us, click below to pay our bills!