Clinton Helping Obama With All This Because She's Friends With Dictator 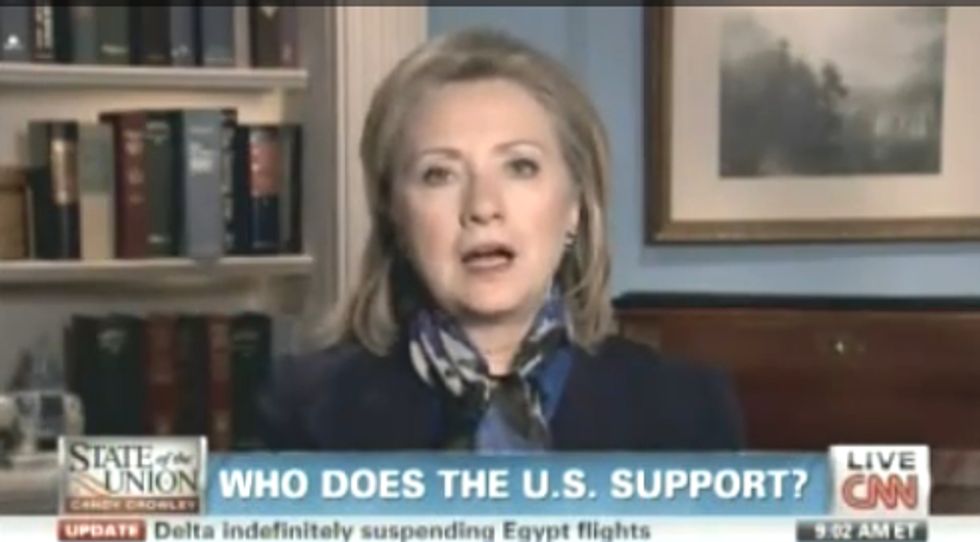 Look: One of those behind-the-scenes stories about the administration. Will is prove to be endlessly fascinating, or will it be yet again as boring as its subjects? Well, it turns out Hillary Clinton is being used by Obama for advice on Egypt and to represent him on this issue. Almost like she'sSecretary of State Hillary Clinton or something. Anyway, Hillary Clinton is an expert in this because she's friends with all the players involved. The dictator players, that is; not the ones looking to overthrow him.

Yes, this is a Politico article, so the premise is pretty thin, but this is still fun:

As importantly, she is also providing valuable insights into Mubarak’s behavior, according to officials. Those insights are honed from years of contact with the 82-year-old Egyptian leader and his much younger wife, a relationship that deepened during Clinton’s 1999 trip to Egypt with her daughter Chelsea.

“Hillary knows Mubarak is a dictator and they aren’t close friends,” says a former top U.S. diplomat with ties to Obama. “But she knows him well enough - well enough to know this guy isn’t Saddam Hussein and he’s probably the one who told the army not to fire into the crowd.”

This administration still has no idea what side they're supporting here. "Yes, she's really good friends with the man, but she can't actually be that close to him, because he's a dictator. But he's still a really good guy."

“Mubarak needs to be shown a path out of this, and Hillary’s trying to find a way to do that,” added the official, who says Clinton is also sharing her experience with other Mideast leaders who may be facing similar upheaval. “She knows a lot of these people on a personal level.”

Or maybe we just forget the personal level and let the power-obsessed pig fall? Because he deserves it? HOW CAN THEY STILL BE UNSURE ABOUT WHO TO SUPPORT HERE? Stop coddling the Nazis. Do you really want your stammering brother to have to deliver a war speech?

But before that happens, Mubarak must go – a fact that Obama and his team, reluctant to let go of a stable ally, have been reluctant to embrace.