Hillary Clinton Is Sick Of Your Sh*t! 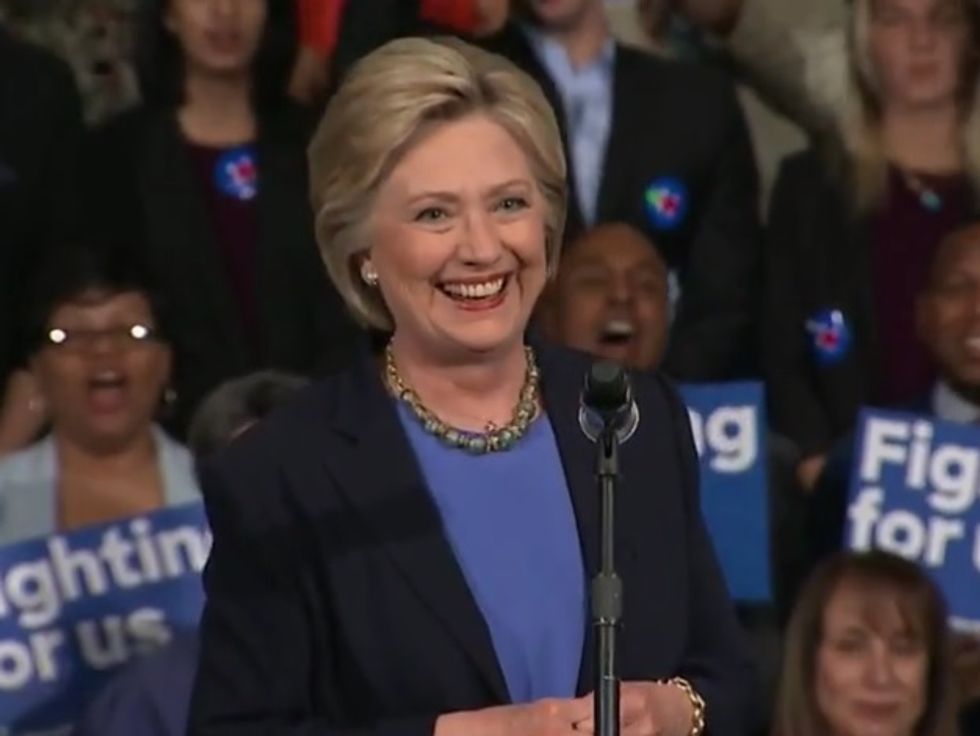 Are Hillary Clinton rallies turning into unsafe spaces? Is she every bit the protest-quashing monster that Donald Trump is? The intrepid truth-seekers at David Horowitz's TruthRevolt bring us this shocking, astonishing video of Hillary shaking hands at a rope line following a campaign event in Harrison, New York, then very rudely losing her temper at a Greenpeace activist who asks her whether she'll pledge to refuse money from Big Oil. According to the headline, she "Loses It" -- in big red letters, even:

The protester, identified in the YouTube description as Eva Resnick-Day, asks, "Will you act on your word to reject fossil-fuel money in the future in your campaign?"

Clinton, clearly annoyed, replies that she takes money from people who work for fossil fuel companies, and then adds, "I am so sick -- I am so sick of the Sanders campaign lying about me. I'm sick of it!" Greenpeace claims that Clinton has accepted "more than $4.5 million from the fossil fuel industry." The plucky hypocrisy-finders at Truth Revolt note that for all their green talk, both Clinton and Sanders refuse to campaign using only bicycles, solar-powered teleprompters, and hemp yard signs:

Despite their campaigns being moved by car, bus and often planes running on jet fuels, Democratic candidates have moved to distance themselves from an industry many in their base consider dirty without really thinking about all the products they use in their daily lives that come from oil.

Now there's a gotcha: if you don't renounce all technology and live in a cave, you greenies are hypocrites. Please be kind to the oil industry because it loves you.

The Sanders Campaign issued a statement saying "Yeah-huh, she does TOO take big oil money":

On t'other hand, there's good reason to doubt that Greenpeace estimate: The Washington Post says neither Clinton nor Sanders has taken much money from the gas and oil industries, based on data from the Center on Responsive Politics:

Clinton and the PACs supporting her have raised more from that industry than has Sanders. Both totals, though, are far less than has been given to Republicans -- especially Republicans from the oil-rich states of Texas and Louisiana.

But note: Both Democrats have received money from "the oil and gas industry." The total for Clinton's campaign is about $308,000; for Sanders's, it's about $54,000. As Clinton noted in the moment, the Center for Responsive Politics mostly aggregates contributions by employer. If a guy who runs the commissary at Chevron in California gives $27 to Bernie Sanders, that's counted as "oil and gas industry" money.

As a percentage of all the money campaigns have raised, both Clinton and Sanders have only raised a fraction of their totals from that industry.

They've got charts and everything -- the difference between the Greenpeace numbers and the Center for Responsive Politics number, as far as we can tell (and we have not gone all Woodward and Bernstein on this) appears to result from who the two groups considers "connected to the oil industry." Since CRP's raison d'etre (French for eater of raisins") is campaign finance, we're inclined to trust their numbers, but we would like to see somebody cleverly explain how Greenpeace and CRP came up with such disparate estimates. The big take-away from the CRP data, though, is that neither Democrat gets a significant portion of their funding from Big Oil:

If you’re looking for influence from the industry, you’re probably looking for something more like Bobby Jindal's totals than the Democrats'.​ About 0.15 percent of Clinton's campaign and outside PAC money is from the "oil and gas industry." Only about 0.04 percent of Sanders's is.

Remember, though: both fly on jets, so don't believe a word they say about climate change.

But wait! We have even more video of Hillary Clinton being completely horrible to Sanders supporters! Watch this incredible footage of her smiling as some people chanting "She Wins, We Lose!" are removed by security (the cameras don't catch them being clubbed and pepper sprayed, we should note):

We have to say, we're not huge fans of shouting down protesters with chanting, which is a very Republican-seeming kind of thing to do, but then we're also going to go all Mr. Civility and say we aren't exactly enamored of people interrupting campaign rallies in the first place. In either situation, we usually just find ourselves wanting to yell "Three-Word Chant! Three-Word Chant!" because we are fuddy-duddies.