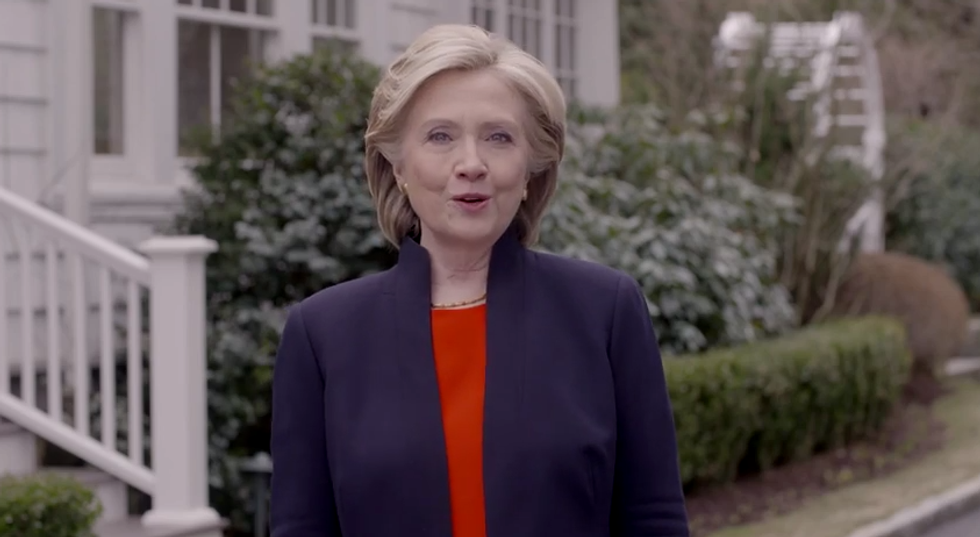 Hillary Clinton broke her first campaign promise, before she even announced she was running for president, so SHUT IT DOWN, PEOPLE, she has no chance now.

Last week, the not-exactly-breaking news broke that Clinton would announce her candidacy on Sunday, by video. Which she did, but she made the entire world wait, like, ALL DAY LONG, instead of announcing it at noon eastern, which she was supposed to do because The Guardian said so, which just goes to show she cannot be trusted (Benghazi!!!!!) -- or that she's a secret West Coaster, because the announcement came around noon, but Pacific time, which everyone knows doesn't count.

In the meantime, reporters got SO MAD at her for ruining their Sunday funday by making them wait around on the Twitters until they could start writing think pieces about her video, her website, her suit, her hair, her cleavage, and her general Hillaryness:

Hillary Clinton's 2016 presidential bid kicked off with a curveball for reporters covering her launch — and they were not happy about it.

After Business Insider broke the news Clinton would launch her campaign some time this weekend, the Guardian followed it up with a story claiming she would announce via a video released at noon on Sunday. However, when the appointed time arrived, there was no video. Now, there are multiple reports Clinton plans to make her announcement at an unspecified time later on Sunday.

This left reporters assigned to cover the launch — including many camped out in front of Clinton's campaign headquarters — spending the day in limbo waiting for the expected news to break. Many of them took to Twitter to express frustration with the situation.

Eventually, Wonkette's close personal friend Jesse Berney broke the news that the non-breaking breaking news would not be broken by video after all, IMPEACH!

FINALLY, after everyone had grrr'd and arrrhg'd about how Hillary Clinton had wasted their weekend, THANKS HILLARY, the video was birthed unto the interwebs, so reporters could finally do their Very Serious Journalism about everything that is wrong with it:

The video is a total FAIL, because it is not a compilation of her stump speeches, and she doesn't say "religious liberty" even once. Instead, it features what are presumably "regular people," but let's face it, they are probably all German stock photos. The video includes a whole bunch of gay couples, doing super gay stuff like holding hands and smiling at each other, so while her website does not include any specific policies, it's pretty clear her top priority is cramming The Gay Agenda down everyone's throat.

Her campaign website appears to contain no swag to purchase, nor does she seem to accept donations by Bitcoin, so unlike Rand Paul, with his Jewishes for Rand and his hoodies for sale, she already seems to be phoning it in. Does she even want this job?

Some of the Republicans who are pretending they can beat Hillary Clinton in 2016 tried to cash in on the Clintonmentum (that's a terrible word; we apologize, let us never speak of it again) on the interwebs by saying, "Hey, remember me? I am also running too, remember?" Ted Cruz made a video, which he released on the Twitters as well. It is just Ted Cruz, talking to the camera, trying to sound kind of sarcastic, but sucking at even that, saying "We're ready for Hillary," and then fart burp blah, typical Republican stuff.

Rand Paul tried to sell some more of his crap, like "Hillary's Hard Drive" -- get it? haw haw haw -- and tried to make #LibertyNotHillary happen. It did not happen.

Florida Sen. Marco Rubio tried to horn in on the attention by reminding the world that he will also have an important announcement on Monday:

But nobody cared about that, so Rubio kept tweeting about his Big Announcement coming Monday evening; anonymous sources say people still don't care and never will, and why is he even bothering, doesn't he know he cannot win? No, he doesn't, and neither do any of the other Republican doofuses who are in the race, but whatevs, laughing at them gives us something to do while we wait for Clinton's inauguration.

In addition to ruining everyone's weekend by launching her launch video at noon Pacific instead of noon actual time, Hillz also introduced the world to her fresh new logo, which is terrible and contains SO many secrets meanings that people are writing 10,000-word Hot Takes about this very second: the colors are red and blue because she hates America; the direction of the arrow shows she's intending to run to the right, which is why Angry Progressives are already (still) trying to draft Elizabeth Warren; the one-letter concept she obviously plagiarized from Barack Obama.

Please share your vast rightwing conspiracy theories about what it all means in the comments, which we do not allow.