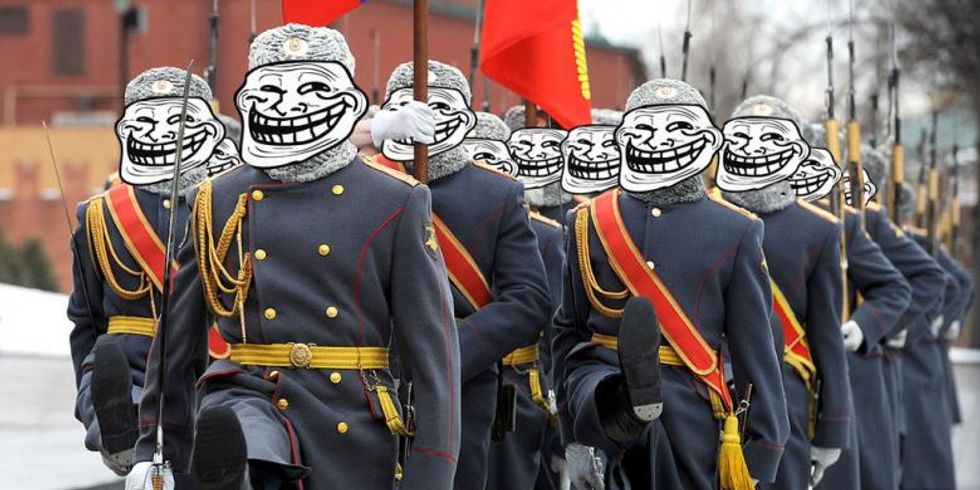 Big breaking news from the extremely credible-looking website "USA SUPREME" (Motto: "We are best American writing news, very accurately"), revealing that the next round of Wikileaks releases will prove beyond a shadow of a doubt that Hillary Clinton not only rigged the Democratic primary, but actually threatened Bernie Sanders's life if he would not drop out of the presidential race he had already not won. Just look at this highly believable, credible journamalisming:

Sanders supporters are waiting with bated breath for the next email dump from Julian Assange, the founder and editor in chief of Wikileaks. Because the DNC rules are suspended If Hillary Drops Out The Second Candidate With The Highest Number Of Delegates Gets The Nomination. He released hacked emails last month showing Democratic National Committee officials plotting to defeat Mrs. Clinton’s chief rival, Vermont Sen. Bernard Sanders.Wikileaks editor-in-chief Julian Assange promised to release more damning emails about the Clinton Foundation, and warned he has enough evidence on Hillary Clinton making secret deals with an alleged Islamic State sponsor for the FBI to indict her.”We have more info and we will publish everything when the time is right some of these materials can get Hillary Clinton to lose the nomination.Was Bernie Sanders threatened to drop out of the race? Well, Assange gave a response to that question in an interview with John Pilger an Australian journalist based in the United Kingdom and his answer won’t surprise many!

Guess what? There's a video in the post, but it isn't a video of John Pilger an Australian journalist based in the United Kingdom, not at all. In fact, it turns out to be an August 25 rant by Bernie-or-buster H.A. Goodman which does at least mention Assange, but contains none of the supposed dialogue between Pilger and Assange. Let's look, shall we?

John Pilger made an interview with Assange and is planning to use this material for his next documentary about Wikileaks founder! We gonna report with every major info from this interview in the nex few days! You can read the first part of the interview in a link below!

Pilger: Julian, we cut you off earlier when you were talking about what you felt were the most significant emails that you have released. Is there any last one that you’d like to mention? And also, do you have any thoughts on Bernie Sanders? I mean what is your opinion why Bernie Sanders drop out of the race?

Assange: Look, I think -- you know, we know how politics works in the United States. Whoever -- whatever political party gets into government is going to merge with the bureaucracy pretty damn fast. It will be in a position where it has some levers in its hand. And Bernie Sanders was independent candidate trying to get the nomination trough the Democratic Party and if you ask me he did get the nomination,but he was threatened to drop out!

Through the magic of our super secret spy system, Google, we discovered that this "interview" was actually copy-pasted together from parts of a July 25 Democracy Now! program in which Amy Goodman made actual interview with Assange. We bet if you look really closely at the supposed quotes, you can guess which parts were copypasted from the real interview and which parts clumsily been inserted by writer with English transparently not great.

Also, that first blockquote up there is an amazing little Frankenstein's paragraph, cribbed together out of lines stolen from the Washington Times, Fox News, and BizPac Review, among others. Given the number of wingnut news sites that have already reposted other USA SUPREME stories containing identical language, it gets difficult to trace the origins of any given line.

Following the incredible interview, we also learn, in a paragraph-long link to another USA SUPREME STORY (And oh, dear, it's even worser than this one!) that Hillary Clinton is one mean-ass life-threatening monster!

While Reporting from the Democratic National Convention in Philadelphia, independent investigative journalistWayne Madsen said that Bernie Sanders was threatened with the loss of his ranking position on the Senate Veterans Affairs Committee and his life if he did not endorse Hillary with enthusiasm.This story was successfully hidden by all media that is under Clinton control, Madsen reported that the secret service was also involved in this case!

Got that? Threatened not only with death, but also with loss of his committee assignment! That one appears to have a couple of parents -- the second USA SUPREME story looks to be cribbed largely from this blog, with "and his life" plus all the stuff following "This story..." added by USA SUPREME. Wayne Madsen did write a thing about the supposed threat to Sanders's committee seat chairmanship, but, sadly, we don't subscribe to his newsletter.

For what it's worth (nothing at all) a "whois" query for usasupreme.com quickly dead-ends at a registration record with "Domains by Proxy LLC," a GoDaddy spinoff that specializes in keeping anonymous the identity of websites' actual owners. The scary thing is that there are commenters who appear to be actual Facebook users writing in standard English, saying they could totally tell Bernie looked scared.

In conclusion, we are impressed with the internet, which as everyone knows can sometimes feel like a middle-school playground populated by brats in ski masks who name-call and taunt with the fake bravery of the anonymous. But sometimes -- thank goodness -- it's nicer than real life. Until Hillary Clinton kills you many times with knives! Then it make you very scare and you drop out of race.