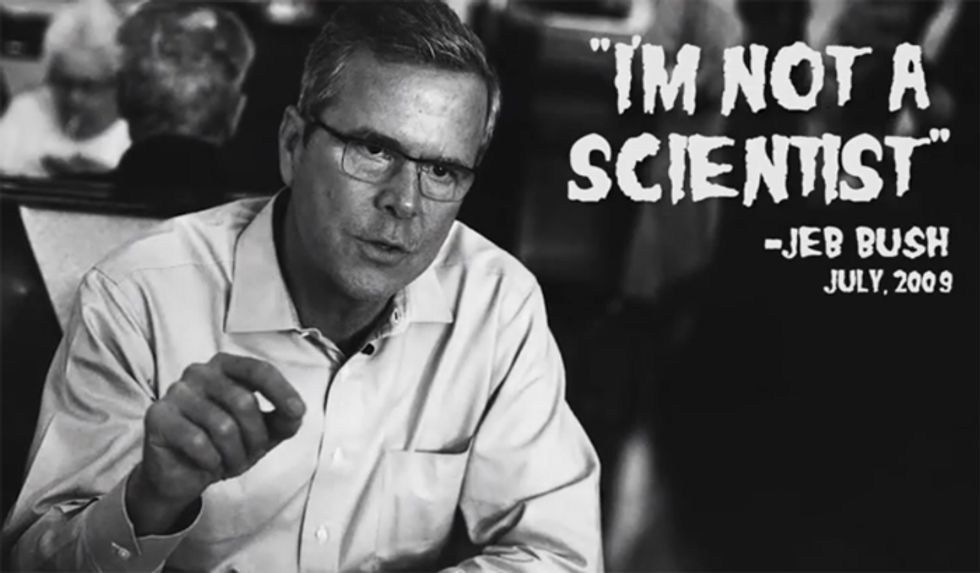 Here's Hillary Clinton's new campaign ad, a pleasant if not incredibly edgy Old-Horror-Movie smack at all the Republicans who are simultaneously not scientists but 103 percent sure there's no such thing as Global Warming. Wisely, the gothic horror subtitles are kept to a minimum, giving the not-scientists plenty of time to say dumb things so we can yell at the screen, "No, you're wrong! That's not right at all! You are a stupid, stupid person to think that!" And it closes with a web address for Clinton's email sign-up page, although it takes a couple more clicks to actually reach her detailed policy goals on renewable energy. She takes the radical position that climate change is real, when any fool knows she should be telling women to get married and have babies for a better America.

The ad was released in conjunction with Clinton's announcement, in a Des Moines speech Sunday, of an initiative to fight climate change, in which she also played off the "not a scientist" meme in less jokey terms. Maybe she's not a scientist, she said, but:

I'm just a grandmother with two eyes and a brain and I know what's happening in the world is going to have a big effect on my daughter and especially on my granddaughter.

Clinton also mocked Republican denials of science in another video, titled "Stand for Reality," saying, "It's hard to believe that people running for president refuse to believe the settled science of climate change," while some of the same quotes from the "horror" video appear onscreen, minus the spooky music:

"Future generations will look back and wonder, 'What were we thinking? How could we possibly be so irresponsible?'" Clinton asks.

And unlike Republicans who intend to spend their first day in office destroying people's healthcare or starting a war with Iran, Clinton says she will introduce plans that to commit to installing "half a billion solar panels" nationwide by the end of her first term, and over 10 years, to increase solar generation capacity enough to power every home in the country. Which sounds good, what with the reductions in greenhouse gases and new jobs, but has she really considered the downside, as this 2009 Joel Pett cartoon worries?

Is this really the clean, energy-efficient hell you want for your children?