Hillary To America: I Am A Grown-Ass Adult, And Donald Trump Is A Idiot 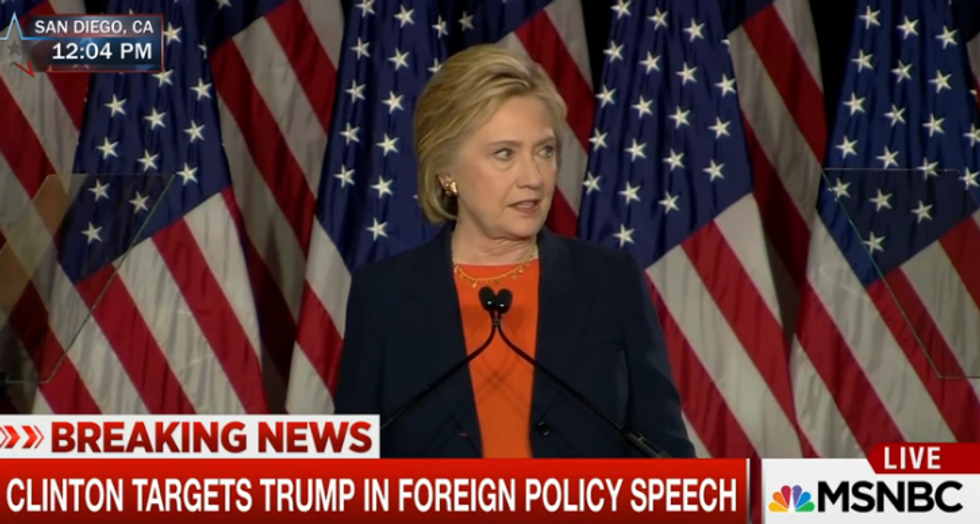 Oh boy, oh boy, did you see Hillary Clinton's "foreign policy" speech about how Donald Trump is an excitable, know-nothing man-child, whereas she is a mature adult human being? It was great! Hillary was in San Diego preparing for the California Primary, and decided to spend a few minutes saying a few words about the man the Republicans have chosen to be their standard-bearer in November.

We'll tell you all our favorite parts, but first, let's check in with Trump to see what he thought of the speech:

As Secretary of State, Senator and First Lady, I had the honor of representing America abroad and helping shape our foreign policy at home. As a candidate for President, there’s nothing I take more seriously than our national security. I’ve offered clear strategies for how to defeat ISIS, strengthen our alliances, and make sure Iran never gets a nuclear weapon. And I’m going to keep America’s security at the heart of my campaign.

Because as you know so well, Americans aren't just electing a president in November, we're choosing our next commander in chief, the person we count on to decide questions of war and peace, life and death.

[L]ike many across our country and around the world, I believe the person the Republicans have nominated for President cannot do the job.

He is not just unprepared – he is temperamentally unfit to hold an office that requires knowledge, stability and immense responsibility.

This is not someone who should ever have the nuclear codes – because it’s not hard to imagine Donald Trump leading us into a war just because somebody got under his very thin skin.

And that was just the first official time Hillary called Trump a total pussy during her speech. She is going to have so much fun running against him!

[wonkbar]<a href="http://wonkette.com/600427/heres-your-sexxxy-president-barack-obama-calling-donald-trump-a-dumbass"></a>[/wonkbar]Hillz then listed a whole bunch of shit Trump has said -- for instance, that he thinks more countries should have nukes (!), that it would be hunky dory if he "treated America like one of his casinos" and let us default on our debt (!!), and that he would murder the families of terrorists (!!!).

But she was just getting started:

He says he doesn’t have to listen to our generals or our admirals, our ambassadors and other high officials, because he has –- quote –- “a very good brain.”

He also said, “I know more about ISIS than the generals do, believe me.” You know what? I don’t believe him.

Is anybody out there doing ROFLMAO giggles yet? Because we sure are! And Hillary's audience sure was!

Unlike him, I have some experience with the tough calls and the hard work of statecraft. I wrestled with the Chinese over a climate deal in Copenhagen, brokered a ceasefire between Israel and Hamas, negotiated the reduction of nuclear weapons with Russia, twisted arms to bring the world together in global sanctions against Iran, and stood up for the rights of women, religious minorities and LGBT people around the world.

And ... I have sat in the Situation Room and advised the President on some of the toughest choices he faced.

He says he has foreign policy experience because he ran the Miss Universe pageant in Russia.

Guys, she's only like nine minutes into her speech at this point. There is SO MUCH MORE, but we really don't want this post to be a thousand words long -- and face it, neither do you -- so here are just a couple more wonderful quick quotes, and if you want to watch the whole thing (YOU DO WANT TO) then the video's right there on top of this post.

There’s no risk of people losing their lives if you blow up a golf-course deal.

Go in for the killary, Hillary:

[I]magine Donald Trump sitting in the Situation Room, making life-or-death decisions on behalf of the United States. Imagine him deciding whether to send your spouses or children into battle. Imagine if he had not just his Twitter account at his disposal when he’s angry, but America’s entire arsenal. [...]

Do we want him making those calls – someone thin-skinned and quick to anger, who lashes out at the smallest criticism? Do we want his finger anywhere near the button?

His short, dumb, fat baby fingers on his teeny weeny baby hands ... and you know what they say about people with small hands? Hillary didn't have to stoop to that level because everybody already knows the answer, thanks to Marco Rubio!

As Vox points out, the entire speech can be summed up by this tweet from gay homosexual wingnut Townhall editor Guy Benson:

Thank you, Twinky McWingnut! You are correct!

Now, if you'll excuse us, we need a cold shower, because WHOO BOY, Donald Trump has no goddamned idea what he's gotten himself into.