Hippies, 'National Review' Feud Over This Year's War On Thanksgiving 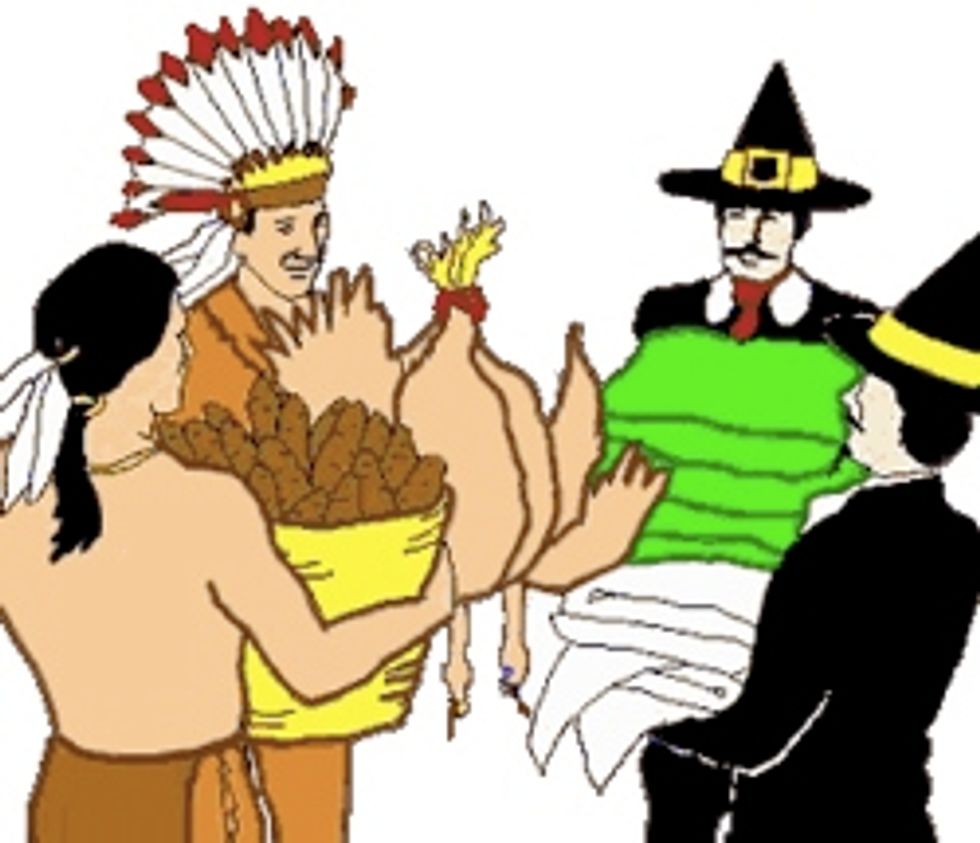 Afeature in yesterday's Washington Post Food section very liberally suggests, with a garish math graphic as its weapon, that Americans should use Thanksgiving as an opporunity to learn about eating "green" and reducing one's carbon footprint. Behold, the language of the new Obama-style post-socialism: "A holiday all about seasonal food presents a real opportunity to eat sustainably. But making the right choices is more complicated than you think. Should you buy local or organic? Or is what you eat -- and how much -- more important?" This would be an insanely mockable newspaper item if not for the fact that it's so boring to read. Just look at the graphic! It's all, "blah blah blah 92% blah fowl e=C0_2 Al Gore blah fart." Fortunately, the National Review read it and has published a lengthy response, about the War on Thanksgiving.

The writer of this NR piece, a certain James S. Robbins, "is the author of Last in Their Class: Custer, Picket and the Goats of West Point. If anyone can see a War on Thanksgiving comin' hither, it is this author of a book about some ol' warlord cadets having had sex with goats, in college:

Thanksgiving is a time to celebrate abundance, and to give thanks for the labor, the good fortune, and the blessings of God that make it possible. But increasingly we are being told that it is a time to observe limits. The front page of Sunday’s Washington Post Food section tells us that Thanksgiving offers “a real opportunity to eat sustainably.” Other articles in the section promote the sustainability theme. But the whole point of the holiday is to do that which is unsustainable. The pageantry of the day doesn’t suggest limits. How many weekday mornings can we sustain motorized floats, marching bands, clowns, the Harajuku Girls, and gigantic helium-filled balloons parading down Broadway?

And who, exactly, would deny James S. Robbins the opportunity to watch the Harajuku Girls in his basement, in his underwear? Why the Indians of course! (Or, to be politically correct, the "Mexicans.")

The hard-core anti-Thanksgiving movement has traditionally been centered around the Native American cause, whence came the term “Thanks-taking.” Animal-rights and vegan groups have traditionally criticized the annual “Turkey genocide.” Now the themes of the ecology movement is creeping into the festivities. They don’t want to see the holiday abolished, just layered with new meaning. Thanksgiving, they assert, is a time for both gratitude and responsibility. “The more you eat,” the Post cautions, “the larger your carbon footprint.” And the larger your waistline, but that cogent argument hasn’t proved a deterrent either.

Robbins rants against several different cultures, interest groups and political disciplines for several more paragraphs to make a very important point: that James S. Robbins, personally, will eat whatever the fuck he wants on Thanksgiving, Indian backlash or not. Uh, go for it dude!...??