Holy Shit, Just How Much Did Donald Trump Jr. Lie To The Senate Today? 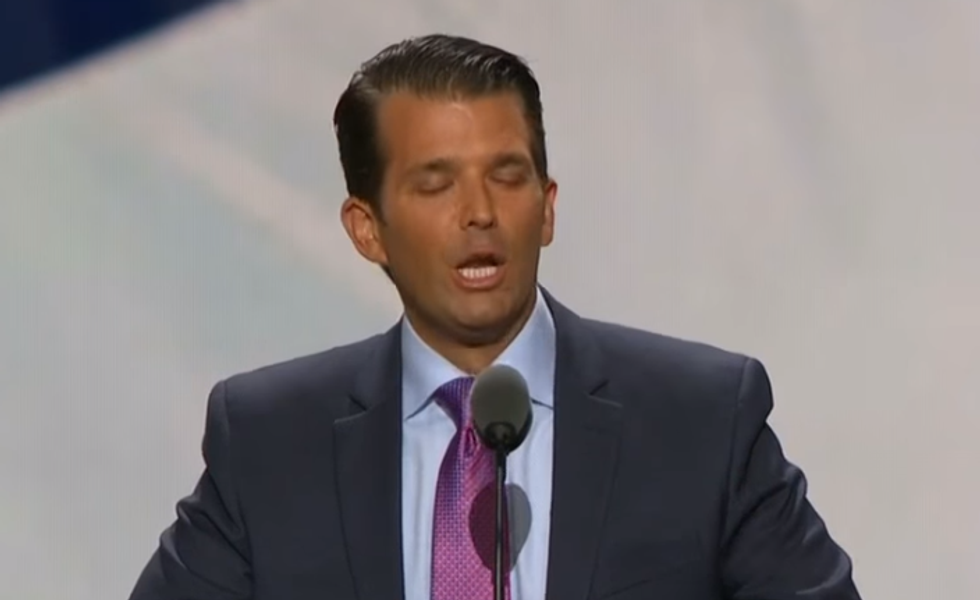 WeenerStump McPantyDribbles Junior, firstborn son of the American president, has concluded his testimony for the Senate Judiciary Committee. We already told you about his hilarious new excuses for why he hosted a Russian spy meeting for Russian spies in Trump Tower during the campaign. If you missed it, that's here. If you don't feel like clicking, the gist was that he met with the Russians FOR AMERICA, just in case they had information showing Hillary Clinton wasn't fit to be president, OF AMERICA. Also his very soul was a-tremble with anxiety about whether it was a good idea or a bad idea to do collusion with Russia, but whatevs. Rarely does one get the opportunity to help steal an election for a big strong orange Daddy such as his.

Rachel Maddow noticed something on the Tweeter machine just after the hearing concluded:

OHHHHHHHH SHIT. How many lies did he say to them? Was he even truthful about his name? Did they ask him how big his father's hands were and, in response, did he exclaim, "THE BIGGINGEST HANDS EVER"? When asked precisely how many witches put curses on him to make his face look that fucked up, did he claim that his face is simply what a genetically superior face looks like? Because that is A LIE.

Sounds like maybe the senators had intel in front of them that they knew to be true, which meant they were ready for Junior to pull his pants down and perjure himself all over the floor.

Let's look at the thingie Coons sent out:

So, the subject line is "Donald Trump Jr. testimony today," so we can't blame this on Coons's office just sending out something random at an inopportune time. And literally the entire thing is a reminder of how it's against the law to lie to Congress, WINK WINK, NUDGE NUDGE, MOTHERFUCKER.

Oh well, Daddy will probably give him a whoopin' and send him to his room without dinner, but with a nice shiny pardon, so no big deal.

In related news, special counsel Robert Mueller reportedly wants to have a nice chat with all the White House staffers who were present on Air Force One when Daddy and Hope Hicks were writing Junior's statement about the Russian spy meeting, so it sounds like he's solidifying an obstruction of justice case against the president. Wheeeee!

Feel free to speculate about all Junior's lies to the Senate in the comments of this, your open thread.

Wonkette salaries are fully paid by lovely souls like you! If you love us, make sure we get paid by clicking below to donate!