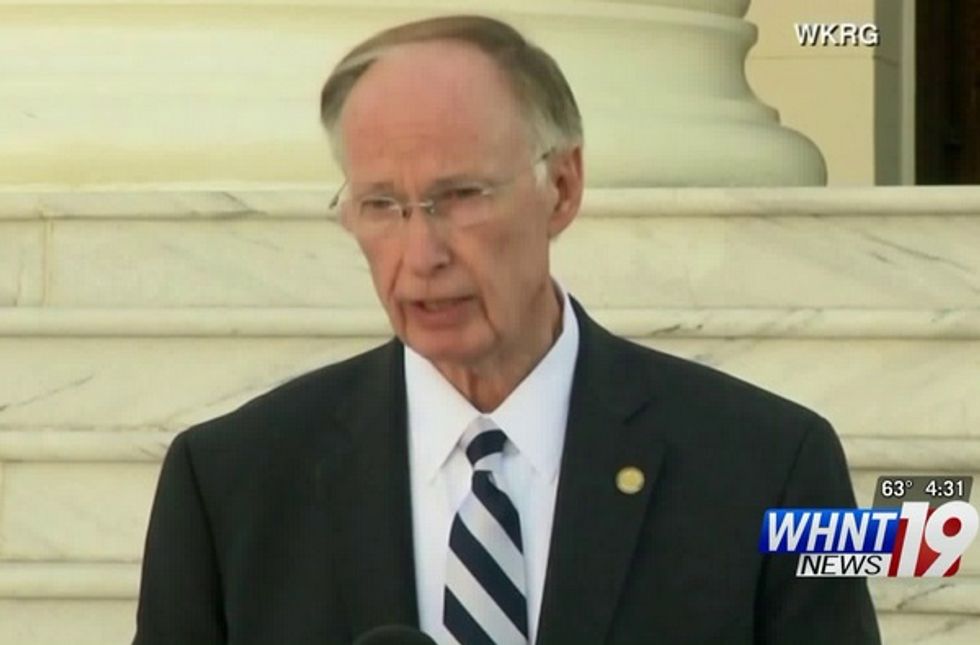 A committee in the Alabama legislature begins hearings today into the possible impeachment of Gov. Robert Bentley, the state's super-sexy ol' governor who had an affair (he insists no actual bonage really occurred, you bet) with his top advisor, Rebekah Mason. Also some of the squickiest phone sex you've ever heard on cable news. An attorney for the state House committee investigating possible impeachment released a great big report Friday detailing all sorts of cheerful stuff about Bentley's conduct, which was chivalrous, romantic, passionate, and accidentally synched to his wife's iPad. Whoops!

How about some misuse of public resources in his attempts to cover up the affair? You betcha! Probably the most charming part of the report is the finding that, after Bentley found out his wife, Dianne, had recorded his phone calls with Mason, Bentley ordered the head of his security detail, Ray Lewis, to take care of breaking up with Mason for him, which strikes us as considerably more rude than breaking up by text:

That there is one classy guy. Also, we see what the paper meant when it said it reads like a cheap romance novel. Still: a better love story than Twilight.

Oh, and then there are the hot text messages, captured by Dianne Bentley thanks to the not-very-tech-savvy governor's gift of an iPad -- which was synced to his phone through "the cloud." Bentley spent campaign funds on buying prepaid "burner" phones -- hello, another likely impeachment count! -- but habitually used his own phone, which means Dianne Bentley has a whole bunch of screengrabs of Mason reminding the governor to get the hell off his iPhone and to use his "private Rebekah phone" instead. Bentley was asked by the House committee to turn over a list of his phones, but he didn't comply with that request. Heck of a guy!

Oh, but what a romantic! Some samples!

Awww, what a couple of sweet kids. This next one at first sounds like the start of a fantasy that will end up involving a coconut bra, but sadly, "you are on a deserted island" is just a metaphor for how alone Bentley is, the poor sad governor. But he's sure quick to try to take it in that direction!

To our great relief, if that fantasy went any further, we don't have a copy. And finally, the best of the bunch, which left Rachel Maddow giggling at the end of her Friday show:

After seeing that exchange while playing a video game online with a friend, Kid Zoom announced, "OK, that's it. My new Battle Cry is now officially 'Bless our hearts and other parts.'"

How bad was Robert Bentley at carrying on a secret affair? At one point, he sent a text to his wife's phone reading "I love you, Rebekah."

Oh, there's more. There's heroic staffer Heather Hannah, Dianne Bentley's assistant, who helped the former First Lady catch her cheating husband by showing her how to capture the synced messages on her iPad. The governor suspected Hannah had tipped off Dianne Bentley; the report also details some seriously gross vandalism of Hannah's car shortly after she gave a deposition to the Alabama Ethics Commission last year:

Within a few days of Hannah's deposition, she believes on or about June 6, 2016, Hannah was outside of her new home watering plants when she heard what sounded like her bushes rustling. Unsure of the source of the noise, she walked to the front of her house where she noticed "scribbles" on the windows of her vehicle.

She stated that at the time she could tell the scribbles were some sort of writing, but she had difficulty reading it. She took photographs of the writing on her windows, and it showed up much clearer in the pictures.

On the windshield, someone had scrawled what looked like, "You will fucking die." A week later, a rock was thrown through the window of of her home. No fingerprints or anything, but Ms. Hannah told the House investigator she "believed both incidents were related to her testimony."

Look, we know that love makes people do stupid things. But Robert Bentley appears to have been one especially clumsy lover. One last example: In 2014, at a hotel in Washington DC, Bentley, thinking Rebekah Mason was at his door, opened the door of his room wearing only boxer shorts. The hotel staff probably got a heck of a surprise.

Gov. Bentley, through his lawyer, keeps insisting he's done nothing illegal, and that the details in the report are inadmissible because they're false, hearsay, and for all we know the result of alien hackers from ISIS. At this point, we're hoping the impeachment committee includes an additional charge of Generally Being A Really Awful Boyfriend.

THE IMPEACHMENT INVESTIGATION OF GOVERNOR ROBERT BENTLEY by WALA on Scribd