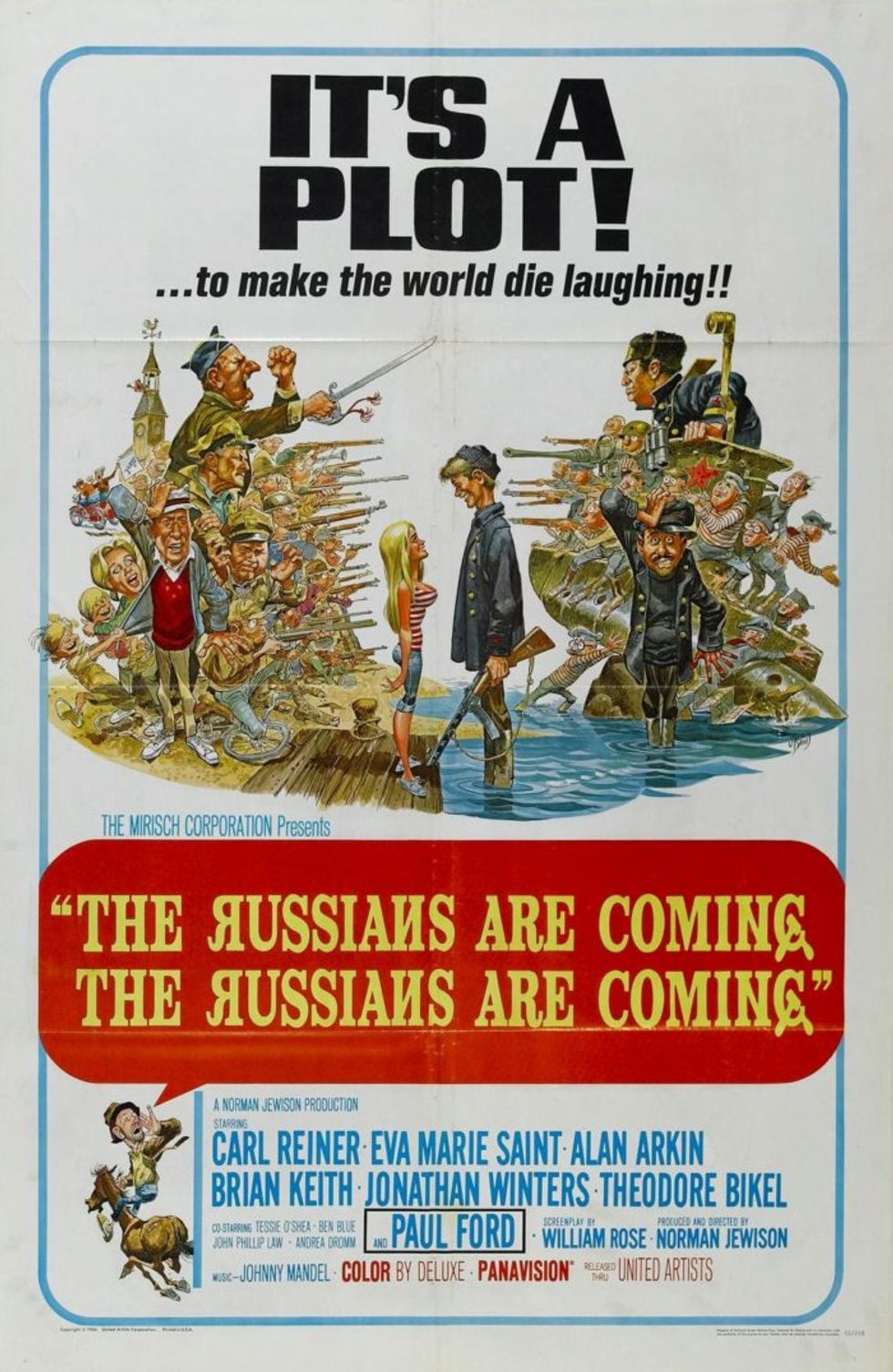 Now that we've beaten Ebola (not in the world, but in America, so we can go back to ignoring dying Africans) and fears of ISIS taking over our delis seem to be waning, we need another jolt straight to the amygdala's fear centers. Retro almost always goes over well, so how about getting scared about Russia again?

After all, they really did invade Ukraine and annex Crimea, plus that business with murdering a jet full of civilians (though maybe that was Obama). On top of that, Russia is seriously in the process of throwing a whole bunch of new troops across its border into Ukraine, which is not a good thing at all. John McCain is calling for escalated sanctions against Russia and more military aid to Ukraine, although we have a feeling he does that in his sleep, too. Also, a European defence policy think tank (it's fun to spell "defence" Euro-styly!), the European Leadership Network, issued a report a few days ago accusing Russia of engaging in Dangerous Brinksmanship, so the Cold War is back, baby! Dust off your emergency rations and get ready to move into your underground house.

Here's a CNN report with many scary numbers and onscreen images of military hardware!

Also, the Russkies are going to be flying bombers near our shores again, just like during the Cold War! This has only been a thing since the 1960s, but, yeah, it's kind of unnerving, given that Russia's strategic bomber fleet is every bit as old as America's B-52s, (or "aging B-52 fleet"; when we were in high school it was already a cliché to point out that the bombers were older than their crews), only not as well-maintained, and totally Russian technology, so that's a bit scary in terms of possible Unintended Consequences. And worse, those big Tupolevs never had any rockin' hits like "Love Shack."

But the point is, we should probably be terrified about all this saber-rattling, even if it is mostly for show. If nothing else, there are plenty of very serious War Heads in the U.S. who will want to Get Tough in response, and then before you know it, we'll be in the War Room and staring nervously at the Big Board again, even if George C. Scott and Peter Sellers aren't available at the moment.

For the sake of some perspective, however, let's note a few details from a Christian Science Monitor analysis of the "threat" posed by the renewed bomber flights. For one thing, dramatic though photos of U.S. fighters keeping an eye on Russian bombers may be, those photos used to be pretty common back in the Bad Old Days:

The fighters we send to meet them are a lot newer, but it's the same old game of flying close to the other guy's airspace and testing their response time. It's unusual in that they've been renewed, but we managed not to freak out over it then, and presumably we can hold our fudge now -- no need to grab the Declaration of War (the short form). Also too, as the Monitornoted last month, those old bombers are old, in crappy shape, and very pricey to maintain:

Russia's aging force of about 50 Tu-95s, supplemented by about a dozen more modern supersonic Tu-160 "Blackjack" bombers, is not regarded as very threatening. The Russians have had a hard time keeping any significant number of them in the air over the past two decades.

Yes, Russia is also building new planes, and increasing patrols and training, but even that scary CNN video notes that their military remains about a fifth of the size of the Soviet War Machine.

The Pentagon doesn't seem especially worried that this is anything more than some loud barking to get the world's attention:

Col. Steve Warren, a Pentagon spokesman, declined to call the expanded air patrols a Russian provocation, Reuters reports. He said that Russians have the right to operate in international airspace so long as they do so safely and in accordance with international standards.

Even so, expect to hear a lot about Putin's new military threat -- and it is a real threat to the former Soviet republics, the poor bastards -- and of course, about how reckless tyrant Barack Obama is just too weak to do anything about it. Also, we'll all be singing another tune when the Russians really do take over and we dumb liberals are first up against the wall. Is it too soon for another "Red Dawn" remake, with the Russians restored to the role of bad guys? Maybe they could carry vials of Ebola this time.