House GOP Does Not Stop Obamacare Again, But Will Probably Shut Down The Government Pretty Good 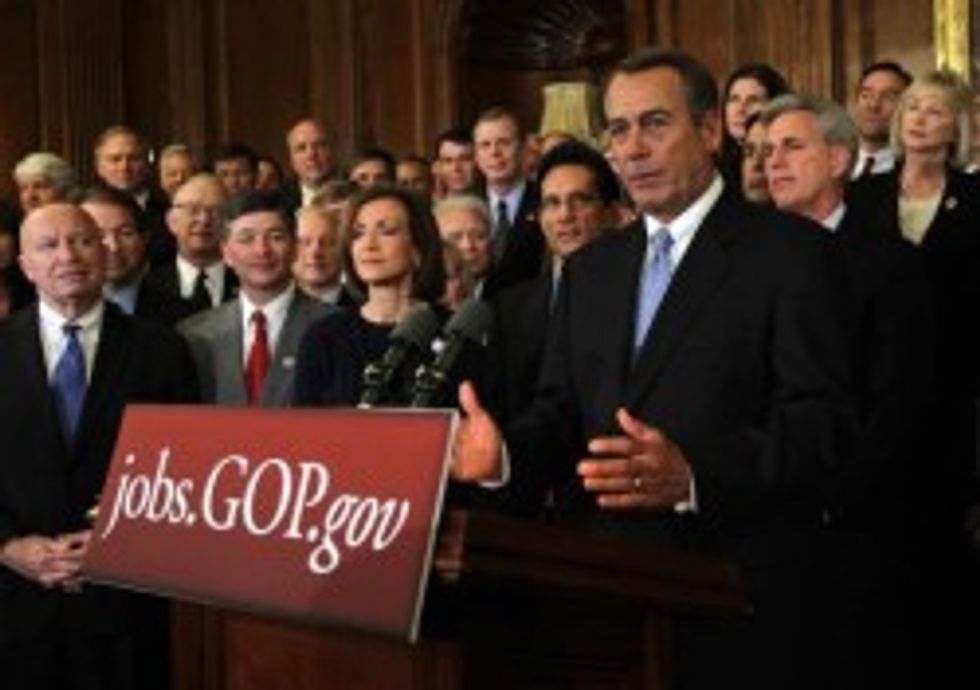 Ever since the White House was overtook by Barry the Kenyan Usurper Muslim in 2009, the US government has operated without an actual budget. Since the Constitution says those things must be voted on first in the House and then passed by the Senate before the President signs it, and then the country gets money, it is up to the House to get that ball rolling. But the Republican led House just cannot get around to making a thing like a budget happen when that black guy is in charge, so instead, the beacon of freedom and democracy of the world has gone around for 4 years using stopgap "spending measures" to keep the lights on.

And yesterday the House GOP decided to go full-Gingrich, so not only will we not have a real budget, but these guys voted not to even pay for the government to do stuff from tomorrow through the middle of December with a spending bill unless they can make Obamacare, which also starts tomorrow, go away for a year. But Obamacare is not a part of that spending bill, no matter how hard the GOP wants to do 9-11 on it, and it is definitely starting tomorrow. And now 800,000 "nonessential" government employees will stop getting paid for a while, and some departments of the government will instead do nothing. Just like Congress.

The US government is on the precipice of a historic shutdown that would result in hundreds of thousands of federal workers being placed on unpaid leave, after House Republicans refused to pass a budget unless it involved a delay to Barack Obama's signature healthcare reforms.

Democratic leaders declined to convene the Senate on Sunday, standing firm against what they described as the extortion tactics of their Republican opponents who they accused of holding the government to ransom for ideological reasons.

The resolution passed by the Republican-controlled House of Representatives in the early hours of Sunday morning makes funding the government until the middle of December contingent upon a one-year delay of the Affordable Care Act. It also strips the new healthcare law, which is due to come into force on Tuesday, of a key tax on medical devices.

What are these people? Drunk? Yes, they are drunk. Reporters at the Capitol were lighting up the twitters about how when the House was voting yesterday, the place "reeked of booze" and Congresspeople were "seen drinking" and "at the liquor store." But how else would anyone shutdown a government on purpose because they are fighting poor people insurance and whore pills?

And about those 800 thousand of the 2.1 million federal workers in the US who will lose their paychecks for a while? No big deal. Some of them are active duty military, even though they will have to still show up for work -- because that is what volunteer means. (The House passed a separate measure that would fund paychecks for active-duty military, but it has not yet been voted on by the Senate.)  NASA will shut down pretty much completely, because who cares about space? The ATF will also be shut down, and new gun permits will not be happening. So, thanks for that one, Tea Party GOP? Also, no food inspections, or death benefits to veterans' families, no new claims at Social Security and no new passports. People will also not be able to use "E-Verify" to check if their immigrant workers are illegally working or just foreign. No National Parks, no Smithsonian Museum, no Statue of Liberty or anything else 5th grade students like to go on field trips to.

These departments and some other people in places like the Departments of Education, Energy and Health and Human Services, have all been deemed "nonessential," even though that term really hurts their feelings.

It’s just cheap shot after shot after shot and now we’re going through a government shutdown over a law that was passed three years ago,” [said Jessica Klement, legislative director for the National Active and Retired Federal Employees Association.] “It’s gotten to the point where Congress continues to play politics without realizing the real effects this has.

Two young women said they were nonessential before bolting away, showing the sensitivity of the topic.

We can just see them snatching up their purses and flinging them onto their shoulders, stomping off in their high-heels yelling FINE and NOTHING'S WRONG and WE ARE NONESSENTIAL, WHATEVER, because that is how women always are.

But hey girls, the House GOP does not care about your girl tantrums over not having jobs, okay? Because none of the government is as near as essential as taking yet another fake stand against Obamacare, which will totally go into effect tomorrow like none of this ever even happened. Thanks a lot Obamacare. Now bring on the debt ceiling.