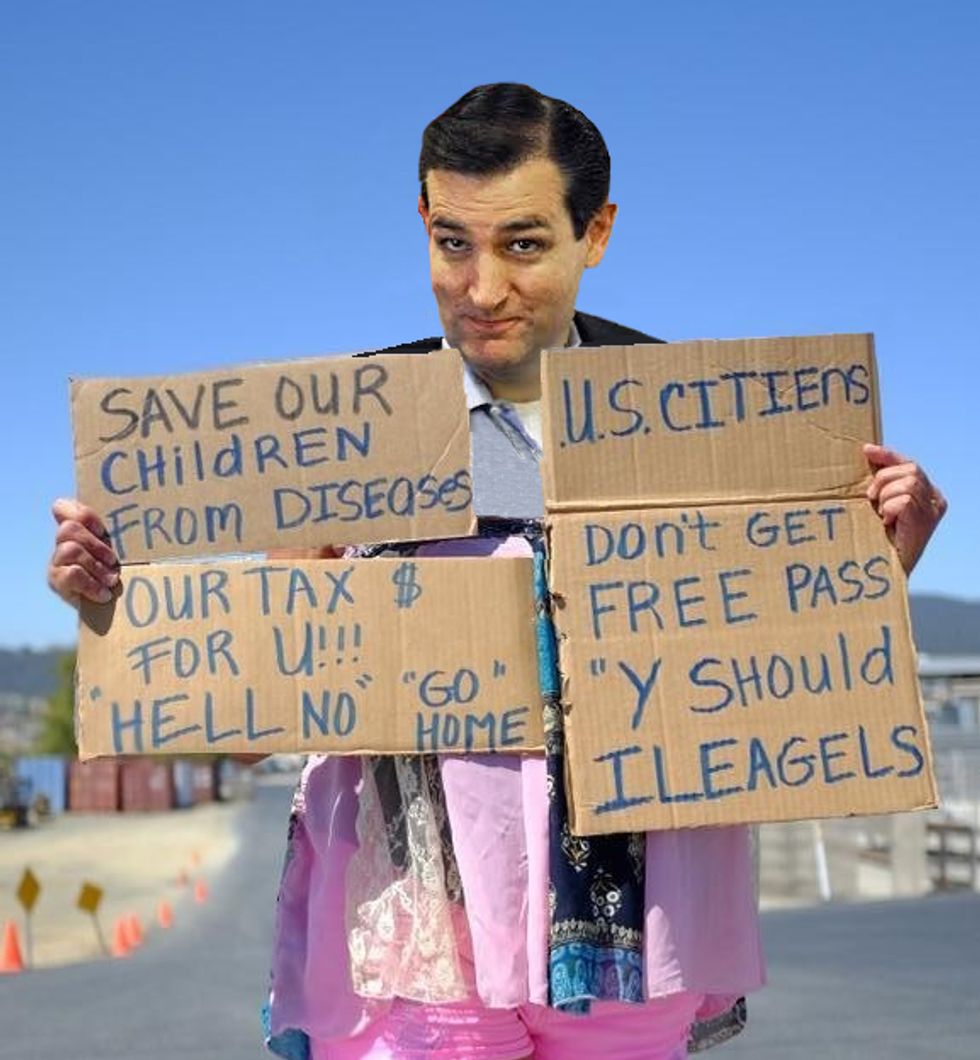 In a development that people sitting in sensory deprivation tanks under 300 feet of bedrock actually could see coming, the House Of Representatives completely failed to do anything about the influx of immigrant children on the U.S.-Mexico border before going into recess for six weeks.Republican leaders pulled the already-watered down bill for $659 million, most of which would have gone to unneeded beefing up of border security, because tea partiers were going completely apeshit about how the bill supposedly would make it too easy for Barack Obama to declare himself Emperor of Mexicans and let all the 8-year-old Guatemalans vote.

The bill died largely because of a push by Senator Ted "I also run the House, hahaha" Cruz to include language that would have ended the President's Deferred Action for Childhood Arrivals (DACA) policy. At Cruz's behest, Rep. Marsha Blackburn had introduced a bill that would have ended DACA and also would bar the President from issuing any executive orders on immigration, ever, anymore, and possibly require that his nose be pushed into a pile of dogshit so he would learn his lesson. The House leadership plan had been to consider the Blackburn bill only after the border funding bill had passed, but the group Tea Party Patriots warned that "The House leadership wants the bills to be separate so that their bill will pass and Blackburn's will fail,” so enough far-right members withdrew their support to kill the House bill.

Yr Wonkette would at least like to recognize House Minority Leader Nancy Pelosi for her comments on the massive clustercoitus: “The worse the bill, the more votes on the Republican side.”

House leadership released a statement on the bill's failure, which of course placed the blame squarely on the chief culprit: President Obama.

"This situation shows the intense concern within our conference -- and among the American people -- about the need to ensure the security of our borders and the President's refusal to faithfully execute our laws,"

In addition, it had this amusing line:

"There are numerous steps the president can and should be taking right now, without the need for congressional action, to secure our borders and ensure these children are returned swiftly and safely to their countries."

You know, the guy they're suing and talking about impeaching because he acts lawlessly and takes too many actions on his own.

And the poor chicken has yet to escape: House leaders called a 3 p.m. "special conference meeting" to iron out the issue; maybe there will be more votes, or maybe they'll just decide to repeal Obamacare one more time.