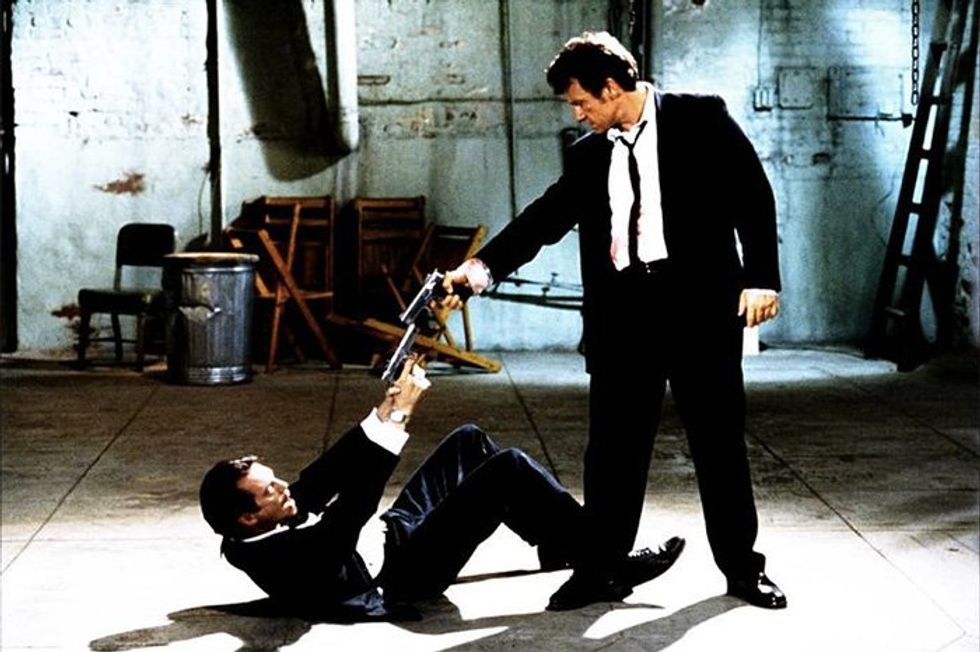 GOOD NEWS! As we mentioned this morning, the White House is talking about strengthening the nation's criminal background check system! BAD NEWS! The most likely bill for pursuing that is actually a fairly modest better-than-nothing measure sponsored by Senate Majority Whip John Cornyn, which would enhance requirements for law enforcement agencies and the military to report criminal prosecutions to the FBI's National Instant Criminal Background Check System, (NICS, because that's more pronounceable than "NICBCS" we guess). Cornyn's proposal wouldn't address the "gun show loophole" through which unlicensed sellers can sell firearms at gun shows without a background check, and it wouldn't require background checks for transfers or sales of weapons by private parties, either.

Oh, yes, there's also WORSE NEWS! For even Cornyn's very weak reform to get support from rightwingers in the House, they're demanding it be linked with adoption of a law requiring for "concealed carry reciprocity" -- or a federal mandate that each state must respect every other state's concealed carry permits, so everyone who lives in a state that "must issue" them licenses can carry their boom sticks around, say, the inner city of Chicago. As Politico notes, "Combining the two ideas would have the net effect of loosening gun controls."

House Finally Does Something About Guns: Makes Them More Easily Available

The answer my friends, is always more guns.

Back in December, the House already passed a bill combining very mild improvements to NICS in exchange for "concealed carry reciprocity" (CCR, which here is not the band). As we mentioned then, CCR has been a top priority of the National Rifle Association, which paints it as no more controversial than requiring all states to recognize drivers licenses or marriages from other states, which is of course bullshit, since those don't actually vary widely from state to state, while concealed handgun permits in some states are quite stringent, and other states mandate granting a permit to anyone with a clean felony record and a pulse (waivers for the latter may be available in several states).

Nonetheless, hardline gun humpers are demanding national CCR as the price on any improvements of background checks, even weak sauce like Cornyn's. House Freedom Caucus founder Jim Jordan told Politico that's just a given, because even the spotty background check system we have now is repugnant to lovers of Liberty. Even the slightest enhancement of reporting requirements, you see,

would allow bureaucrats and administrators to take away an individual's Second Amendment liberties, and something that fundamental you’ve got to have a court make that decision to give due process to American citizens[.]

Apparently the due process built into the system already is just taking liberty away all the time, so states should be forced to honor the weakest concealed carry permits to make up for it. Jordan said he had a Solemn Pledge from House leadership that CCR would be tacked on to any new gun regulations, forever, until it passed.

But hey, maybe Donald Trump will stand up to the pro-NRA extremists in the House? Of course, that would require that he have even the slightest familiarity with the legislation under consideration, which he will not, so when the Freedom Fuckers manage to kill any hope of improving NICS, we can look forward to Trump blaming Democrats for being inflexible. Why, he'll ask, don't they care about the children?

As former Obama speechwriter Jon Favreau pointed out on Twitter, there's something terribly familiar about all of this:

In conclusion, let's review: CCR is very bad. Congress should not do a bad thing. Republicans are fucking jerks. TAKE BACK THE HOUSE IN NOVEMBER.

Yr Wonkette is supported by reader donations. Please click here to send us money. Don't be a jerk.