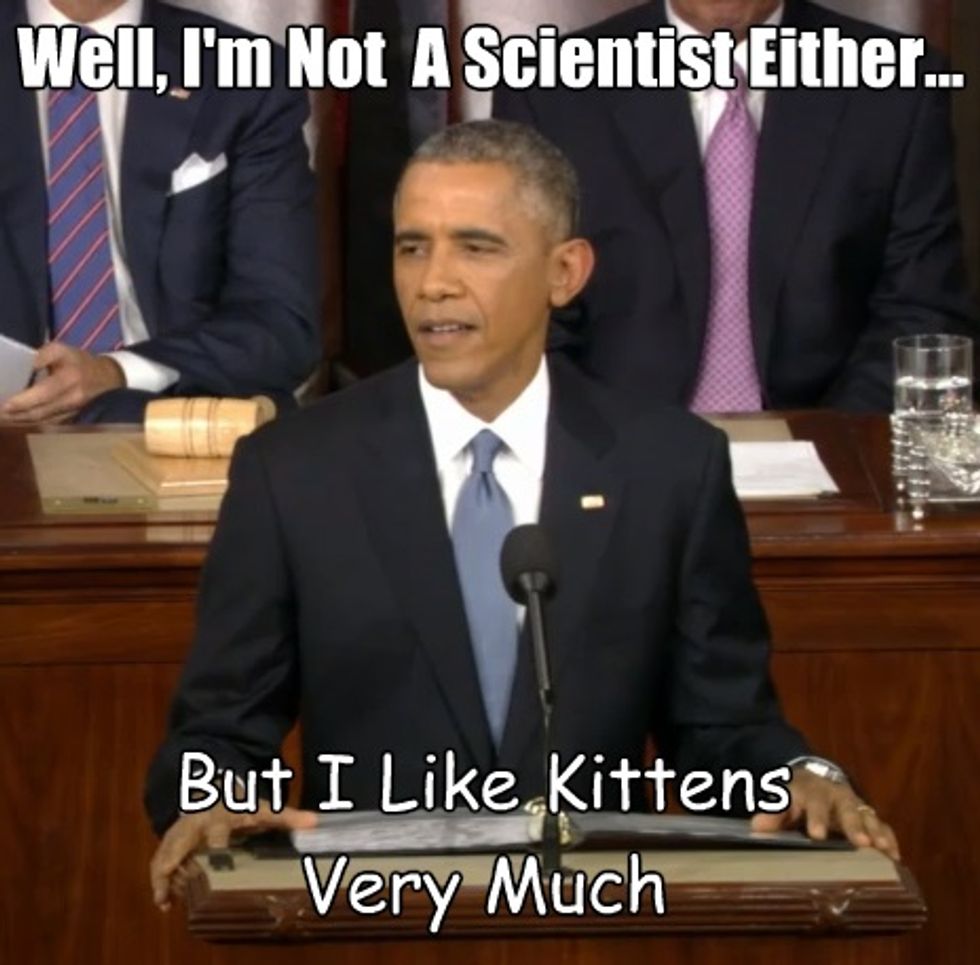 Here's a fun little bit of political ratfucking (not really, it's totally an accident!): When the House Republican website posted a version of Tuesday's State of the Union address, with Republican talking points popping up to reply to each point President Obama made, the posted version of the speech left out at least two significant portions of the speech, deleting almost everything about global warming:

At the 43:25 minute mark, President Obama is supposed to say “I’ve heard some folks try to dodge the evidence by saying they’re not scientists; that we don’t have enough information to act. Well, I’m not a scientist, either. But you know what — I know a lot of really good scientists at NASA, and NOAA, and at our major universities. The best scientists in the world are all telling us that our activities are changing the climate, and if we do not act forcefully, we’ll continue to see rising oceans, longer, hotter heat waves, dangerous droughts and floods, and massive disruptions that can trigger greater migration, conflict, and hunger around the globe.”

Instead, the entire passage is missing, with a painfully obvious skip in the words, and picks up only with Obama saying, “The Pentagon says that climate change poses immediate risks to our national security. We should act like it.” Maybe they left that part in since it sounded like we could start bombing the climate if it refuses to comply with our demands.

Elsewhere in the speech, another shorter section goes missing; at 44:51, the GOP version eliminates Obama's pledge to never use torture and his condemnation of anti-Semitism. The deleted section reads,

As Americans, we respect human dignity, even when we’re threatened, which is why I’ve prohibited torture, and worked to make sure our use of new technology like drones is properly constrained. It’s why we speak out against the deplorable anti-Semitism that has resurfaced in certain parts of the world.

Jeez, as if Ben Shapiro didn't already think Obama was anti-Semitic -- now he's actually unsaid the one mention he made of the problem (not that Shapiro thinks Obama meant it anyway).

“It was inadvertent.” Steel said via e-mail. “We are working with YouTube to figure out what happened.”

By golly, we find that explanation completely believable. Maybe the House should have thought twice before purchasing the Rosemary Woods Edition of Final Cut Pro.