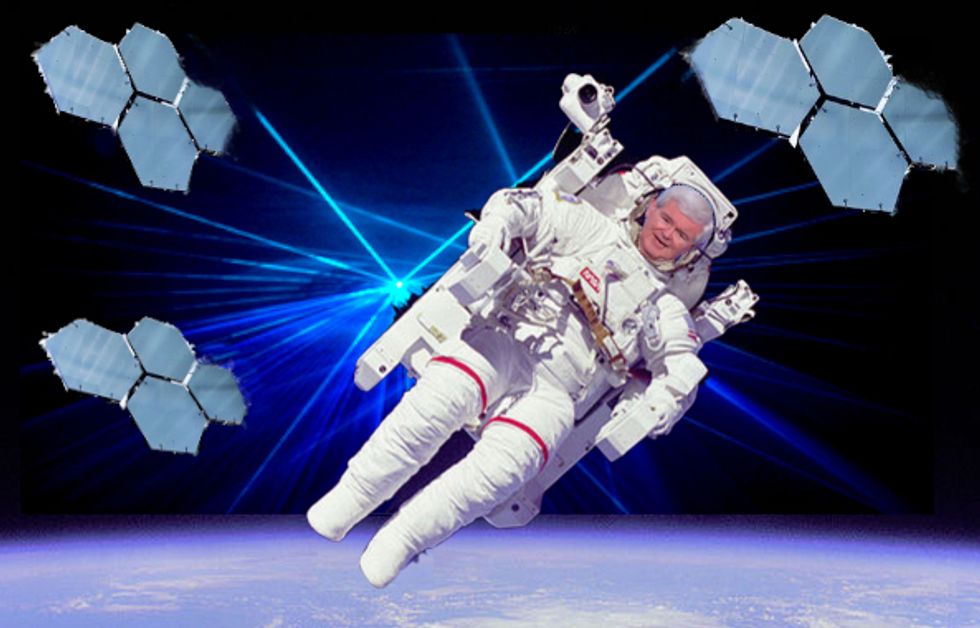 Hello, have you met the Republican wingnuts on the House Science Committee? They include: Paul Broun, who has told supporters that evolution and the big bang theory "are lies straight from the pit of hell,"  and Dana Rorhabacher, who once suggested that temperature fluctuations on earth millions of years ago can be traced to dinosaur flatulence. There is also good old Todd Akin, who has stated that "legitimate" rape cannot result in pregnancy because women's bodies have a way to "shut that whole thing down."

So it is not really a big surprise that these learned men reviewed NASA's carefully prepared plans, shot them to shit, and gave them new marching orders to complete on a reduced budget:

NASA wants to launch an unmanned spacecraft in 2018 that would capture a small asteroid — maybe 7 to 10 yards wide — haul it closer to Earth, then send astronauts up to examine it, in 2021 or beyond.

[But] the science committee in the Republican-controlled House voted to bar NASA from pursuing that faraway rock. In a straight party vote — 22 Republicans for, 17 Democrats against — the committee laid out a road map for NASA for the next three years that brushed aside the asteroid capture plan, the centerpiece of the Obama administration’s agenda for space exploration. The plan, instead, included new marching orders, telling NASA to send astronauts back to the Moon, set up a base there and then aim for Mars (and to do so with less money than requested).

Perhaps the House Republicans are unaware that we have already reached Mars, via a rover called the Mars Rover? Or, perhaps Your Wonkette is being uncharitable and Republican legislators -- who, as we have learned, have a solid grasp on science and scientific inquiry -- have a really good reason for telling NASA what to do and how to do it?

“A costly and complex distraction,” is how one Republican critic, Representative Steven Palazzo of Mississippi, described the asteroid mission. Other legislators complained that the project seemed far-fetched and poorly articulated, and that it would not advance America’s bragging rights in space the way a return to the Moon could. The bill awaits a vote by the full House.