How Are Wingnuts Reacting To Paris Massacre? You’d Be Surprised! (No You Wouldn’t) 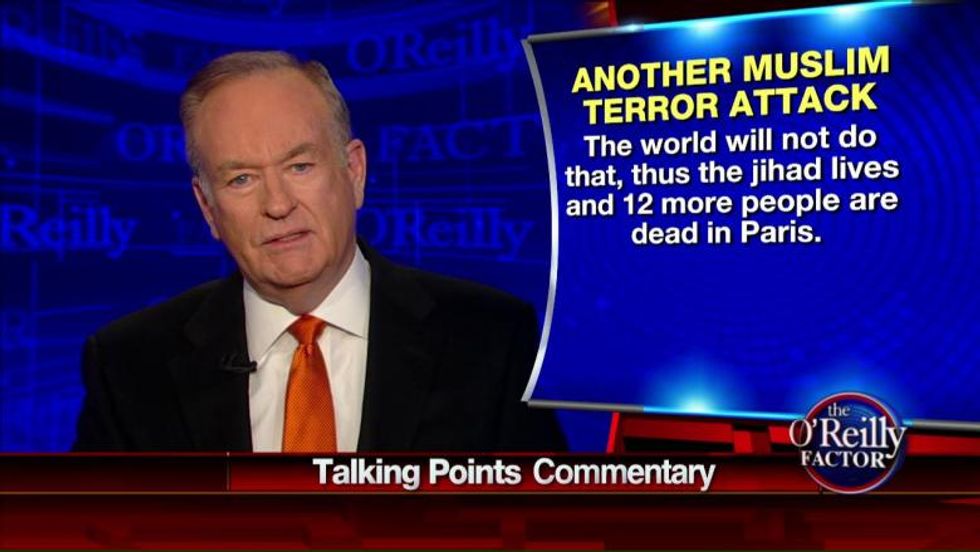 While Parisians took to the streets with their "Je Suis Charlie" signs yesterday to quietly express solidarity with the murdered satirists and bystanders at the offices of Charlie Hebdo, the American Wingnut-Industrial Complex was in Full Panic Mode, explaining exactly why we all need to pay attention to this horrific terrorist act by three people that all Muslims bear responsibility for. Fox News's Bill O'Reilly actually offered one of the tamer bits of stupid on the attack, complaining that when he condemned the murders, Barack Obama was actually downplaying the Muslim threat. The president had expressed confidence that France's commitment to freedom of speech "is something that can't be silenced by the senseless violence of the few." Ah, but Mr. Obama has it all wrong, said O'Reilly:

But it isn't the few. The Jihadists have strongholds in at least a dozen countries. They have killed thousands of American military people -- tens of thousands of civilians. They are occupying thousands of miles of territory in the Middle East and ISIS fanatics are beheading civilians on camera and kidnapping people all over the place. President Obama should know the word "few" is absolutely erroneous. These are people are waging a world war and it will be a never ending war unless the entire world comes together to defeat the Islamic jihad.

Apparently lost on O'Reilly is the tiny detail that most of the "tens of thousands of civilians" murdered by extremists have been other, non-radical Muslims. But no, the problem is ALL of Islam, including, apparently, the non-radical parts that extremists want to eliminate. Still, O'Reilly got in a real zinger: " ISIS recruits fanatical Muslims -- that's who they recruit. They don't go after flower children from San Francisco. They are not the Moonies." We're sure the Washington Times will be demanding an apology any moment now.

Elsewhere in the Foxhole, Eric Bolling tied the attack to Bill de Blasio and his War on New York City Police, complaining on Outnumbered Wednesday that ending "stop and frisk" was likely to create more terrorism, because if cops can't randomly frisk everyone, how do you expect to catch all the bad guys, whatever color they are?

You're taking a law enforcement tool out of their hands ... In New York, one of the first things Mayor de Blasio did here is he said we're going to pull stop and frisk. In deference to the Fourth Amendment -- unreasonable searches and seizures -- they said it was unreasonable to profile African-Americans or anyone for that matter… Point is, why are we pulling law enforcement tools out of their hands?

Bolling was pretty thrilled, though, about the prospect of heavily armed police showing up in massive numbers whenever there's a crime, like they used to for a while after 9/11:

Twelve cop cars would line up, they'd get out with the full body gear, with the machine guns, just to show the bad guys they were there. That's kind of gone away. Maybe it's time to bring it back?

Kennedy Montgomery (she has a last name?!) was less enamored of encouraging a police state, because civilians shouldn't feel like the cops are hunting them. But Harris Faulkner warned that we are all being hunted by ISIS, right here in U.S. America, as an attack in France by three guys who have not yet been shown to be associated with ISIS proves:

The segment then moved on to the important topic of racial profiling. Fox News Supreme Court correspondent Shannon Bream and Kennedy offered some insights on why racial profiling might or might not be helpful in cracking down on Islamic radicals. The problem, Kennedy said, is that profiling is really hard, since "sometimes bad guys don't look like bad guys." Bream jumped in and agreed it's really frustrating that radical Muslim terrorists won't conform to her stereotypes of what a terrorist ought to look like:

That's my question about these guys. If we know they were speaking unaccented French and they had ski masks on, do we even know what color they were, what the tone of their skin was? I mean, what if they didn't look like typical bad guys? As we define them when we think about terror groups.

Honestly, if terrorists refuse to all be swarthy and say durka-durka all the time, how on Earth are the police supposed to catch them? Thankfully, in America, we presumably know what skin color the bad guys are.

On Twitter, Fox Radio's official delegate to the persecuted Christian community, Todd Starnes, had some thoughts on the shocking hypocrisy of the mainstream media:

Yeah, those cowards in the lamestream media, constantly promoting a controversial photo that angered the Reagan administration, but too fearful to ever say a word about Islam! Of course, as Mediaite points out, Fox News is also not airing any of the more extreme cartoons that ran in Charlie Hebdo and elsewhere. Not all of us sommes Charlie, we guess. Needless to say, we are obliged to note the Starnes's complaint reminds us all that Todd Starnes reputedly drinks pee.

And for the sake of equality, the Associated Press apparently removed a photo of "Piss Christ" from its photo library in the wake of similar complaints about alleged hypocrisy.

Not that the stupidity was limited to Fox, which is merely the Derp Mothership. For instance, Alan Dershowitz somehow concluded that France got what it deserved for being too cozy with international terrorists and radical Muslims. In an interview with Newsmax, Dershowitz explained that France is just too darn Muslim-Friendly:

"They play with everybody. They reward every terrorist," Dershowitz said of the French. "They've never been part of the international campaign against terrorism. They are part of the problem, not part of the solution."
"I hate to pile on when they're suffering like this, but you have to understand how bad France has been historically in the war against terrorism," he said.

This may be news to the French soldiers who have been fighting guerillas in Mali, but on the other hand, those soldiers probably haven't drawn a single cartoon mocking Mohammed. Not surprisingly, the real reason France is too friendly to terrorists, according to Dershowitz, is that it doesn't love Israel (or the Likud [Dok Zoom is A IDIOT] party, which is the same thing) enough.

Rush Limbaugh won some sort of prize, we guess, by blaming the attacks on Obama's response to Benghazi. He also managed to blame Jeremiah Wright, too, because chickens and 9/11.