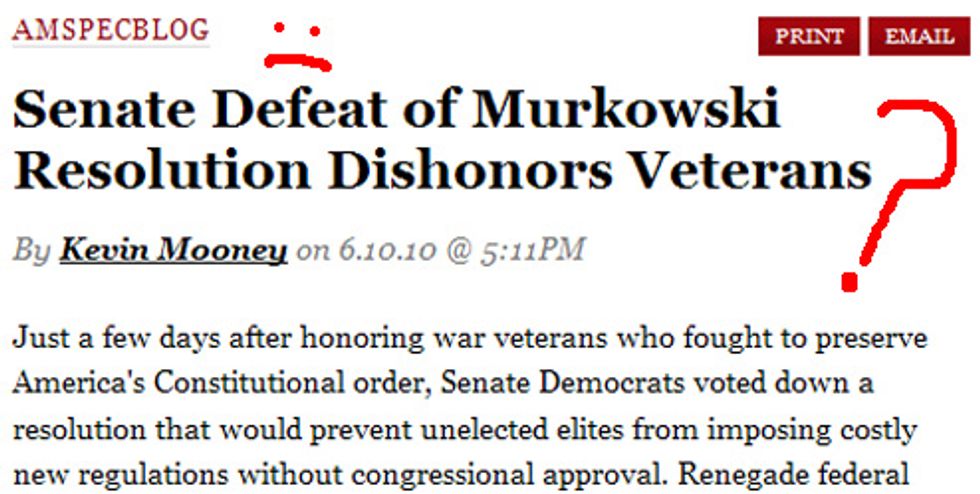 The Senate defeated the Dirty Energy Industry's sleazy attempt to prevent any kind of enforcement of gross carbon emissions, hooray, the ads on Wonkette worked! The AP had a pretty good single-sentence summary of what happened: "The defeated resolution would have denied the Environmental Protection Agency the authority to move ahead with the rules, crafted under the federal Clean Air Act." But what really happened is Barack Obama literally pissed on the graves of dead veterans, at Arlington National Cemetery ... and he did this right after Memorial Day!

Adhering to a half-century-old federal law to clean up America's air that is enforced by a 40-year-old cabinet-level agency proposed and created by Richard Nixon, did you know this was a treasonous act? It is! Our Troops have been anointed by Sarah Palin to fight against our nation's laws, so that .... uh, to support the troops! Anything else, such as American law, is technically illegal. When will the troops kill the Senate for this coup?

American freedom suffered a terrible setback today that desperately calls out for a constitutional revival. It will take forceful leadership to restore our nation's elected branches back to their proper station. As Democracy gains ground in the Middle East thanks to perseverance of U.S. soldiers, it is ironic to see it lose ground here at home.

Ironic. There's that word again! Wingnuts have been loving this word, on blogs, since Socialism/Fascism was imposed on America because of the anti-troops seduction of the popular vote, which savagely elected some moderate corporate Democrats. [American Spectator]