How Is Donald Trump Poor Today? 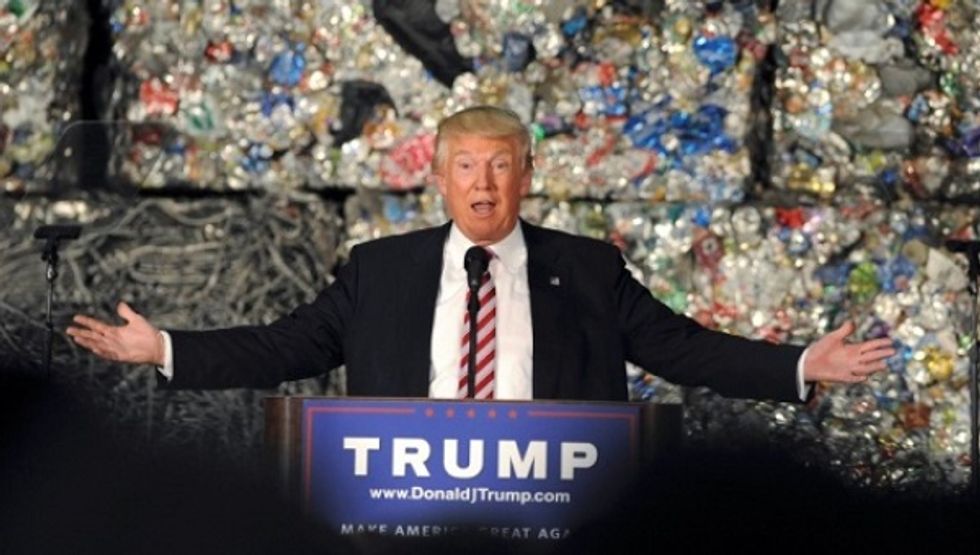 adjacent to trash...Two fun stories today from Politico (right?) and the New York Times (because itwasn't written by Eric Lichtblau):

Trump Tower is going bankrupt in Toronto, after cheating lots of nice people out of their condo investments, and Donald Trump makes like $10 a year off any of his properties that aren't actually losing $2.4 million.

Let's have a laugh!

Trump first got involved in the [Toronto] project 15 years ago, when he held a press conference with Toronto’s mayor to announce his plan to build a new Ritz Carlton downtown. That plan fell apart when it came out that his development partner was a fugitive who had been convicted of bankruptcy fraud and embezzlement in the U.S.

Trump in bed with embezzling fraudster fugitives? THAT can't be right! Is there more?

It is clear from affidavits in the fraud cases and the bankruptcy case that the buyers have taken a financial beating. A warehouse supervisor named Sarbjit Singh, who was earning about $55,000 a year, testified that he borrowed money from his father, a retired welder, for the deposit on his hotel unit; he never closed on the deal, but he says he still lost $248,000. Se Na Lee, a homemaker who was married to a mortgage underwriter, borrowed money for her deposit from her parents; she did close, and ended up losing $990,000 through December 2014, she says.

Oh. That's actually not funny at all. Seems like investors seldom do as well as Donald Trump does, do they?

A judge later described Talon’s prospectus and other “deceptive documents” as “a trap to these unsurprisingly unwary purchasers,” and ruled that they could sue Trump as well as [Trump partner] Talon.

Ivanka Trump lies like that thing on her father's head.

This sounds so familiar, no? Oh right, because Trump keeps "licensing" his name, image, and reputation (lol) to people who then screw all their investors, while Trump takes millions out of the projects, and judges keep being like "yo."

So that was gross! Now what have you got for us, New York Times?

On the financial disclosure forms that Donald J. Trump has pointed to as proof of his tremendous success, no venture looks more gold-plated than his golf resort in Doral, Fla., where he reported revenues of $50 million in 2014. That figure accounted for the biggest share of what he described as his income for the year.

But this summer, a considerably different picture emerged in an austere government hearing room in Miami, where Mr. Trump’s company was challenging the resort’s property tax bill.

Mr. Trump’s lawyer handed the magistrate an income and expense statement showing that the gross revenue had indeed been $50 million. But after paying operating costs, the resort had actually lost $2.4 million.

Oh you old so-and-so! You are so bad at everything!

Are there one million more examples of this? THERE ARE, and you should read them! We will give you just one to wet your whistle:

Mr. Trump’s disclosure forms reported income from the Wollman and Lasker ice rinks of just under $13 million last year, and $8.6 million the year before. But accounting figures provided by his company to the city show that those figures represent gross receipts. And city contract documents show that out of that amount, he had to turn over to the city 28 percent of gross receipts and 56 percent of food sales, and cover expenses like utility payments and salaries. Recent figures were not available, but a 2011 city audit showed that for the previous three years, an average of $25,340 a year for both rinks was left after expenses.

OK, just one more, about his stupid golf club, because Leo and Murray throw the greatest old man shade since Statler and Waldorf:

At one point during the hearing, Mr. Delgado stared at the income and expense report showing that Doral had lost $2.4 million in 2014, a number that did not even include millions of dollars in mortgage payments. Mr. Delgado began to chuckle and turned to the county property assessor, Murry Harris.

“So he spent $104 million to lose two and a half million dollars a year,” Mr. Delgado said. “I know how to lose that money without having to spend $104 million. How ’bout you, Murry?”

So now we know why Donald Trump is so racist: it's because of his economic anxiety.