How Is Michelle Obama Murdering Jesus And Easter Today? 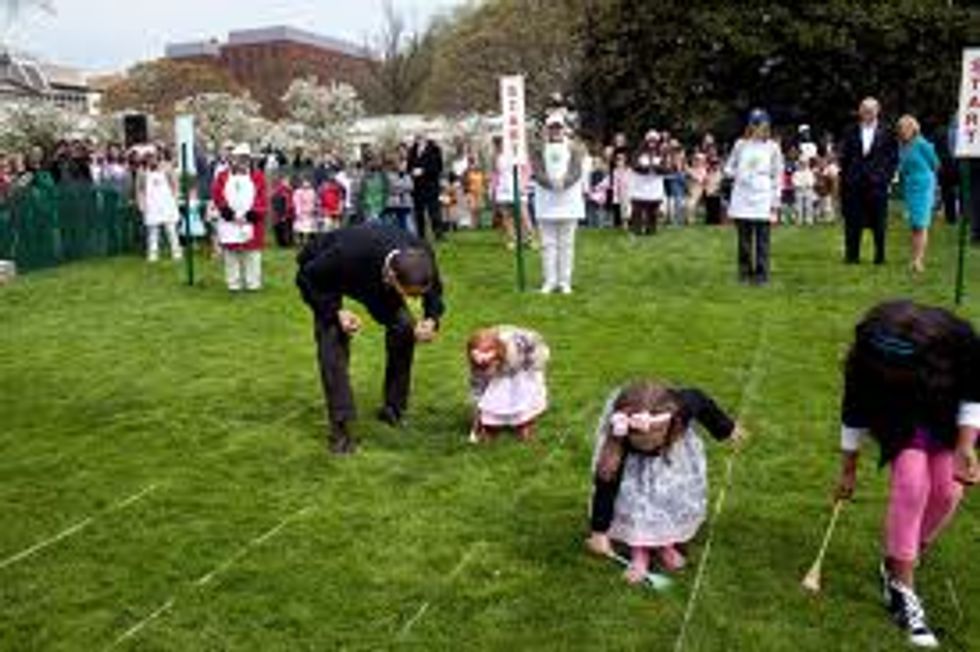 Well, it is almost time for the White House Easter Egg Roll! Which means it is already past time for theannualwhinging about the White House Easter Egg Roll. How is Michelle Obama murdering it today? Oh, just the same way she did in 2011, again. The "Christian" "News" "Service," founded by superawesome dude and in no way a Luke Russert style nepotism mediocrity L. Brent Bozell III, has some Thoughts on this, and wouldn't you know it, they are MAD THOUGHTS OF ANGER! GRRRRR!

This year's White House Easter Egg Roll has been turned into a "fat camp" to inflict exercise and the First Lady's "Let's Move!" healthy meal plans on kids who want just want to celebrate the season on the South Lawn.

An e-mail from the "Let's Move!" campaign says the Easter Egg Roll has been turned into a "Let's Move! Social":

"We're excited to announce that our next White House Social will be a Let's Move! Social here, at the White House. On Monday, April 1st, 2013, the First Family will host the 135th annual White House Easter Egg Roll with the theme 'Be Healthy, Be Active, Be You!'"

The First Lady's "followers" will be there to preach to kids about their eating habits:

"We are inviting Let's Move! followers on Twitter and Facebook and their children, ages 5 - 13, to join the fun on the South Lawn and of course to share their experience with their followers!"

There will even be a physical activity regime, something called "sports courts," and cooking demonstrations to "educate families," the White House Easter Egg Roll web page says:

"In addition to all the fun and games, the day's activities - which will include sports courts and cooking demonstrations - will help educate families on smart ways to incorporate healthy eating and exercise choices into their daily routines, which are key pillars of First Lady Michelle Obama's Let's Move! initiative."

Don't be surprised to see the Easter Bunny handing out rabbit food to the little tykes. Remember, when Mrs. Obama enlisted Big Bird to hawk bell peppers as a snack?

The e-mail announcing the morphing of the egg hunt into a fitness camp comes after the White House promised the event would go on as scheduled - after it took heat for suggesting it might be cancelled due to the nation's budget woes.

BELL PEPPERS????? At long last madame, HAVE YOU NO LEFT NO SENSE OF DECENCY?

We don't want to BLOW YOUR MIND, but it turns out some of the commenters at the "Christian" "News" "Service" website aren't acting very Christian. They're no Yahoo! commenters, but then, not everyone can be.