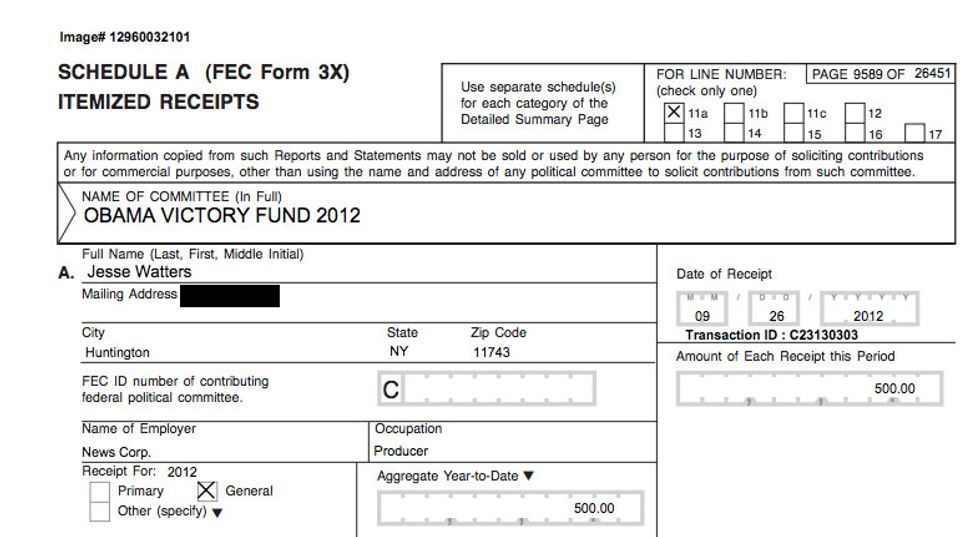 Jesse Watters, the Fox News correspondent who made a name for himself as Bill O'Reilly's ambush interview guy, has some 'splaining to do. Politico's Dylan Byers reports that a Federal Elections Commission filing shows Watters donated $500 to the Obama campaign in late September. Which kind of seems at odds with his recent on-air opinion that Obama voters are "zombies" who would mindlessly support their Dear Leader "as long as there was Obamacare, gay marriage and abortion on demand." (Then again, he's also a guy who -- assuming he was involved in producing this idiotic video clip -- thinks using "record scratch" sound effects is a hilariously comedic way to suggest that someone is terribly wrongheaded. Skee-RATCH???)

So here is the proverbial what-was-he-smoking gun, with Watters' employer plainly identified as "News Corp":

An enterprising camera crew might be able to stake out Mr. Watters' home or office to ask him what the deal is, here -- maybe it's just one of those ironic hipster donations the kids are so into these days, after all. Or maybe the real story is that some demonic librul stoled Watters' identity to create trouble for him. Or maybe his conservative brain got et? We are certain that, if he is still employed by Fox News by the end of the day, he will have a sufficiently glib explanation. Or maybe he'll just admt he's a secret librul, get gay-married at an abortion clinic, and start smoking ganja with Kal Penn! (record-scratch sound effect)

Anyone attempting to ambush him should of course, be aware that he is likely to lecture them on how it should be done.