How Much Would You Pay To Watch Kim Davis Rub Naughties With A Black Lady? 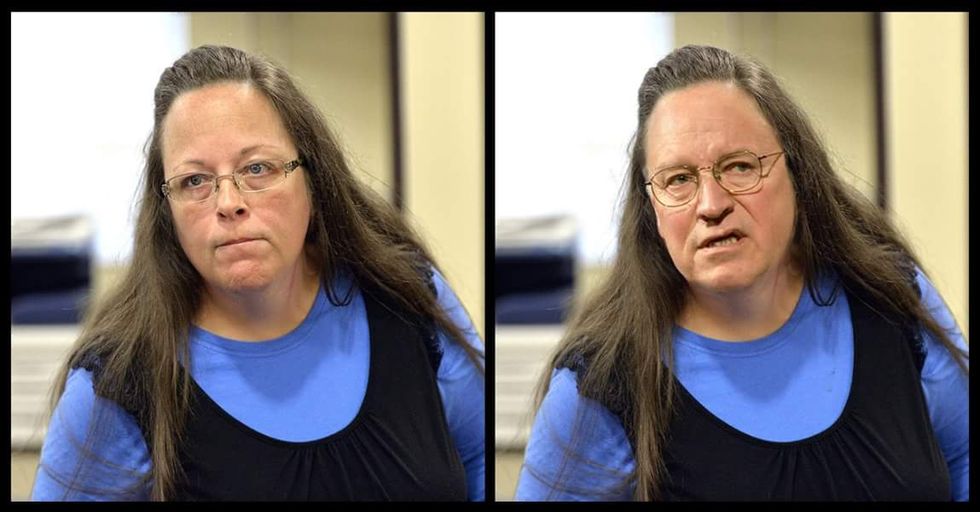 Five dollars? Seven-fitty? Four easy payments of $19.99, as long as you call right now and they throw in a matching set of cookware for free? Well sorry, but you've all been outbid. A porning company called The Dogfart Network (what, was every other word in the English language taken?) has put out a press release offering one Mrs. Kim Davis, wife of Otter Farts "Joe" Davis, gay-hatin' clerk of Rowan County, Kentucky, FIVE HUNDRED THOUSAND smackeroos, on one condition: that she make sweet, sweet lesbian in the interracial way, on camera. They don't specify whether it has to be a black lady, a Latina, or a Filipino, she just can't be white. Kim, a grieving nation -- or at least a very tiny percentage of a grieving nation who's into some FUCKED UP PORN -- is calling you! Will you answer the call?

The Dogfart Network which is the leading online destination for Adult Interracial content is offering the Holy Kim Davis a chance at redemption.

“We here at Dogfart have always believed in equality. We have interracial sites, gay sites, straight sites, and we think Kim Davis has been appalling,” said a Dogfart Spokesman. “We are giving her a chance at a redemption. We are willing to drop half a million bucks for Kim to come out to our studio and shoot an Interracial Lesbian scene for our network.”

Seriously, THE DOGFART NETWORK. In fact, we really, really want John Oliver to report on this story so he can read this line, from Mediaite:

Yes, you read that correctly. A company calling itself “The Dogfart Network” wants to give Davis half a million dollars to have sexual relations with a non-Caucasian woman.

Now, Wonkers, you probably have some very rational objections to this! Like, for instance, maybe you do not want to see Kim Davis bumping uglies with ANYBODY. Maybe you feel like in the Bible it was Adam and GoFundMe, not Adam and GoFuckMe. These are valid concerns.

Maybe you're thinking "NO FAIR! She's a married woman!" But don't worry! The Dogfart people say she's "welcome to bring her family with her on an all expense paid vacation." Therefore, Otter Farts gets to go, and he's allowed to bring his hat.

But maybe you're wondering, "Yeah, but does her husband get to have any fun on this trip?" Well, yr Wonkette doesn't know, but we're guessing that, for the right price, Old Straw Hat would be willing to 69 Mike Huckabee for religious liberty purposes. Maybe there's a market for that, on the internet. Get on it, Dogfart!

But hey, Kim Davis, $500,000 is a lot of money. For that much, you could QUIT YOUR FUCKING JOB and let somebody more qualified do it. Just saying!