How Will SCOTUS View Trump's Muslim Ban 2.0? We Are Not Hollywood Psychics! 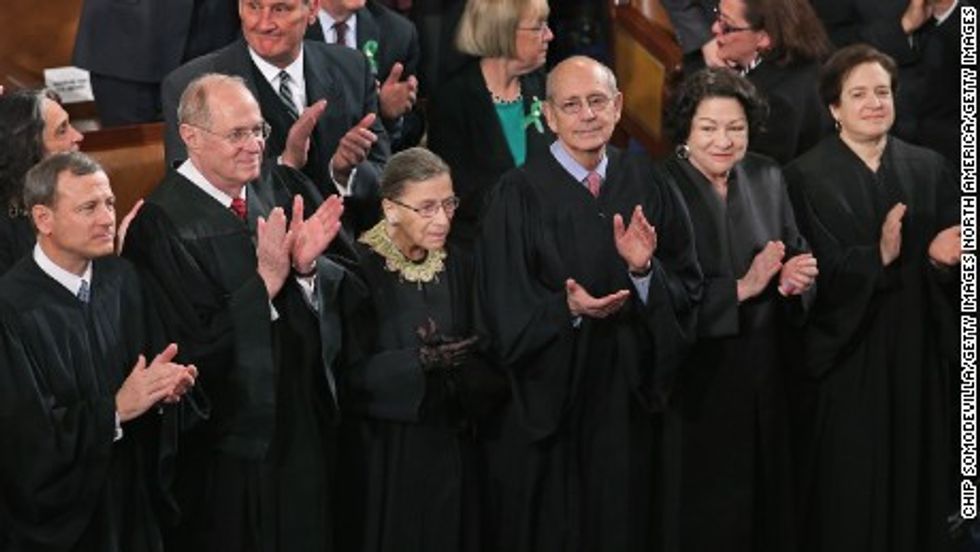 President Trump issued his all new and improved Muslim ban on March 6, to take effect just after midnight on March 16. And, just as with the original version, suits challenging it were immediately filed. On March 15, both the federal courts in Hawaii and Maryland ordered a halt to the ban before it could take effect. So, for the last couple of days, pundits have been jawing about whether the court orders were correct and what fate the ban would meet in the Supreme Court. Commentators are split on the first question, but everyone seems pretty sure about the second. Every one that I saw declared that if this case gets to the Supreme Court, the vote would be 4-4, but if Judge Gorsuch is confirmed by then, the president’s ban would be upheld, 5-4.

I am not that sure about the Supreme Court. So many people assume that you can predict what judges will do based on the president who appointed them. Did you notice how many media reports about the recent court orders listed who put the deciding judges on the bench? That connection between politics and jurisprudence may exist in many cases. For example, we pretty much know how the various members of the federal bench would decide a case dealing with abortion. But this case is different: it is a face off between the executive and judicial branches. And the federal bench can get pretty feisty when its power is questioned.

Before the Supreme Court would even get to the merits of the case, however, there is a procedural hurdle facing the plaintiffs: standing. To have standing when you’re challenging governmental action, (1) you have to have an injury, (2) the injury has to be traceable to the governmental action, and (3) the relief you’re asking for must cure your injury. In both the Hawaii and Maryland cases, the courts spent about half of their opinions talking about standing.

I think there’s a good case for it. Just take Hawaii. The state alleged two injuries. The first was for its university, which is an arm of the state. Because of the ban, a number of students have not been able to enroll this semester, costing tuition dollars. There are also faculty who have been prevented from traveling for conferences, and scholars from the six banned nations are not able to come to the school. The injury to the state is clearly traceable to the ban, and enjoining the ban would cure the problem. The second injury is to Hawaii’s biggest industry: tourism. The state presented evidence that since the first ban went into effect, tourism is down. That is fairly traceable to the ban, and again, enjoining the ban would cure the problem.

Even if the case for standing weren’t solid, the Court has ignored the requirement in at least one important case. In Bush v. Gore, then-candidate Bush complained that the differences in the Florida recount from county to county violated the rights of Florida voters. He was not suing claiming he had suffered an injury: He had no right to be president (in more ways than one). The Court never even mentioned his lack of standing, though, and instead just forged ahead with the decision on the merits. So, there is at least precedent that in a very important case, the Court was not so nice about the standing requirement.

Let’s assume the Supreme Court concludes that plaintiffs have standing to sue. Is the president a slam-dunk to win? I say no. I wouldn’t put money on the outcome. The main issue decided in both cases is whether the president’s ban violates the Establishment Clause of the First Amendment. That’s the clause that forbids the government from setting up a national religion. The ban on “establishing” has long been held to include a ban on favoring one religion over another. But a big fight is going to be over how much scrutiny the Court can give to the president’s action.

The government’s attorneys argue that the federal courts are limited to reading the text of the ban to see if it is facially neutral about religion. Everyone agrees that it is. Thus, according to the defendants, the ban is valid. The courts are not permitted to inquire further. The president’s action thus remains largely unreviewable.

Plaintiffs argue that in an Establishment Clause case, the federal courts are permitted to look beyond the plain text to find evidence of intent to discriminate against a religion. Both the Maryland and Hawaii courts found ample evidence from the comments of Donald Trump and his claque, both before the election and after, even up to the moment of signing, to show that the basis for the executive order was an animus toward Muslims.

Many of the pundits commenting on this finding proclaim that the Court can’t look to what candidate Trump said. It’s just campaign puffery! But there is precedent for looking to what was said in a campaign. In the case of Alabama supreme court justice Roy Moore, the Ten Commandments guy, the eleventh circuit reviewed his campaign promises to find that his actions after being elected violated the First Amendment.

The key here that makes me unable to predict what the Supreme Court would do with this case is that the president’s position is that his actions are unreviewable. Back in the day when George W. Bush was president, he set up military tribunals to try the guys in Guantanamo. The hearings were virtually unreviewable by the federal courts; the president had the last say on the prisoner’s guilt or innocence. The federal courts were limited to making sure procedure was followed. In a series of cases, the Supreme Court ruled that this scheme was not legal. Court watchers who expected the Republican justices to side with the Republican president were astonished. But it was a case of the Court saying, “You cannot take away our power to review your actions.”

As I said, I don’t know what the Court would do in the current case. But a win for the president is not a slam dunk.