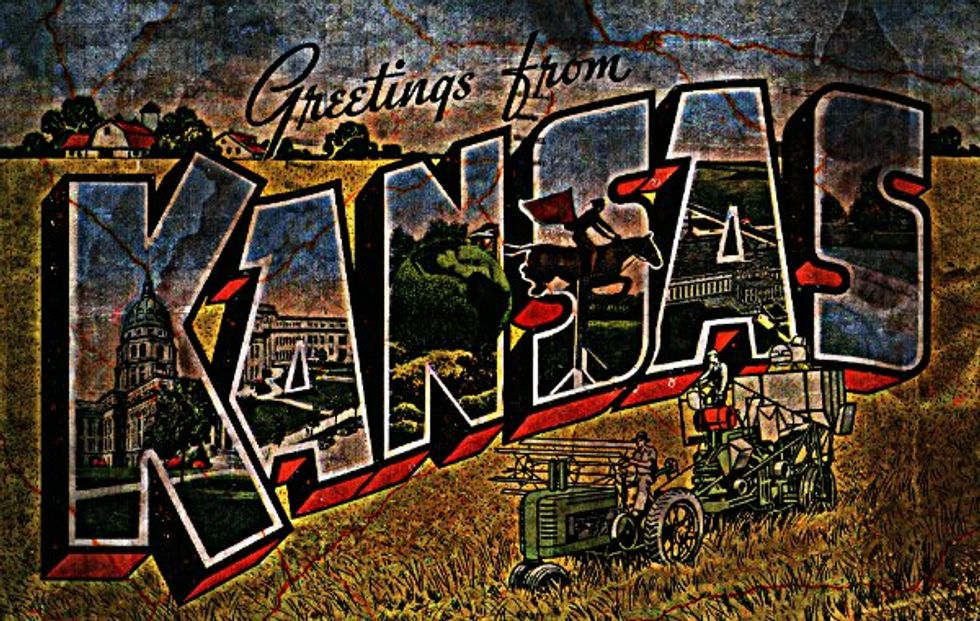 You know, one of the biggest problems with having Sam Brownback as governor of Kansas is that his endless evisceration of government funding means that we have to find newer and better ways to say, "What's the matter with Kansas?" We need to get out front of that joke before you people make it in the comments.

So what is it this time? Was he being a tax cut fetishist who somehow still managed to raise taxes on the poors? Did he threaten to strip all funding for the judicial branch if he didn't like one of their decisions? Did he come up with an expensive and unconstitutional plan to ban 'bortions? Haha nope because he has already done all those things! No, this time, he's cutting education to the bone, because children are not the goddamn future in Kansas, apparently.

Brownback plans to cut nearly $45 million in funding for public schools and higher education in his state by March.

Brownback shared his plans for the current budget cycle on Thursday ahead of a Senate vote on a bill aimed at eradicating a $344 million deficit projected for the end of June. More than half of the money would be taken from funding for K-12 schools, and take place as soon as March 7, The Associated Press reported. The cut would also affect Kansas colleges and universities.

You have to hand it to him. Most rapacious GOP fuckers can only manage to alternate cutting K-12 or higher ed at any given time, but Brownback manages it in one fell swoop. He's able to achieve that because Kansas law gives the governor the authority to unilaterally make some budget cuts to balance the budget ... which is part of the problem here, obviously.

Things have gotten so bad in Kansas that at the end of last week the Kansas City Star wrote an editorial that was a litany of the awful things Brownback has managed to do, and it was about one million words long. It reads like something we would write, save for the distressing lack of swearing.

Conservative Republicans in the Legislature, who pushed for the deep income tax cuts at the heart of the dysfunction, are fond of saying that government needs to be run more like a business.

But in fact no business could get away with failing as spectacularly as Kansas has. The management team would be shown the door, something Kansas voters failed to do when they narrowly re-elected Gov. Sam Brownback in 2014.

Ouch. The editorial goes on to give many examples with many dollar figures to show how Brownback and Company have basically raped and pillaged the state, but there's none stupider than this shortsighted garbage fire:

Staff shortages are most acute at the state’s two hospitals for people with severe psychiatric problems. Nurses and support staff at the state hospitals in Larned and Osawatomie work so many extra hours that concerns for staff and patient safety are well founded.

Because of security breaches at Osawatomie, the federal Centers for Medicare and Medicaid Services cut off Medicare payments for patients. The state must now pick up the cost, about $600,000 a month.

So, you fail to fund services at their most basic levels and that, in turn, leads to more costs down the line. Why, it's almost as if giving massive tax cuts to the rich and emptying the government's coffers does not actually work and instead creates a state of constant shortfall and chaos! Naw, that can't be it. We should probably just let Brownback singlehandedly enact some more tax cuts and then everything will get sorted, right?