Jon Huntsman Donating To Himself For a Few Days 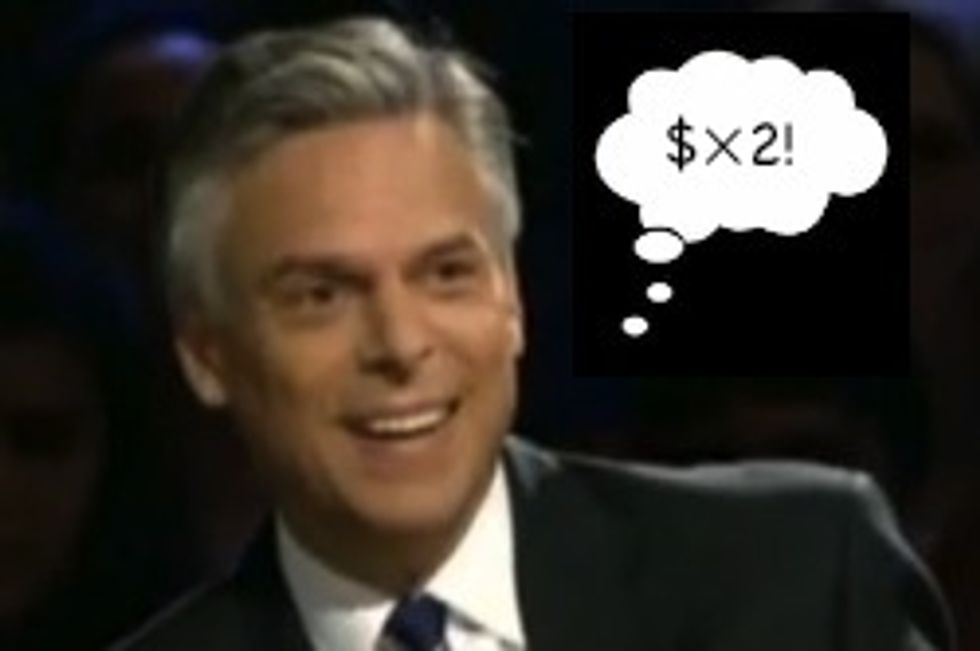 Republican fringe-moderate candidate Jon Huntsman sent out an e-mail to supporters the other day announcing that he would match any donations received until midnight on January 4, that being the first day of the rest our lives following tonight's roll in the Iowa hay. While perfectly legal -- there's no limit to the amount of capital gains a bajillionaire can sink into his or her (her!!) political campaign -- it doesn't feel or sound or smell legal. "I am adding a wrinkle," Huntsman wrote. A wrinkle?

The "wrinkle" is that the money would specifically go to the cost of airing a TV ad in New Hampshire. (The TV ad actually already exists in cheapo web form.) Huntsman also noted a surge in campaign contributions in the week or so around New Year's, so as the Chicago Sun-Times politely observed, this is just ("just") a way for Huntsman to "leverage his cash." In other words, it's less crass than having to admit in a few days or weeks that he had to funnel in a few million (more) to his campaign, just because.

Stiiiiill, this comes off as sounding a lot like those endangered species e-mail blasts that environmental groups send around: board member so-and-so will match your donation if you would just toss a few coins into the breeding campaign of the greater sage-grouse! The problem is, cerebral, anti-theatrical nice guy Huntsman is not nearly as cute as the least cute animal on the planet. Endangered? Yes. But look at what's happened to the wild speckled Santorum in the past 72 hours. [Chicago Sun Times]