Huzzah For The Apocalypse! 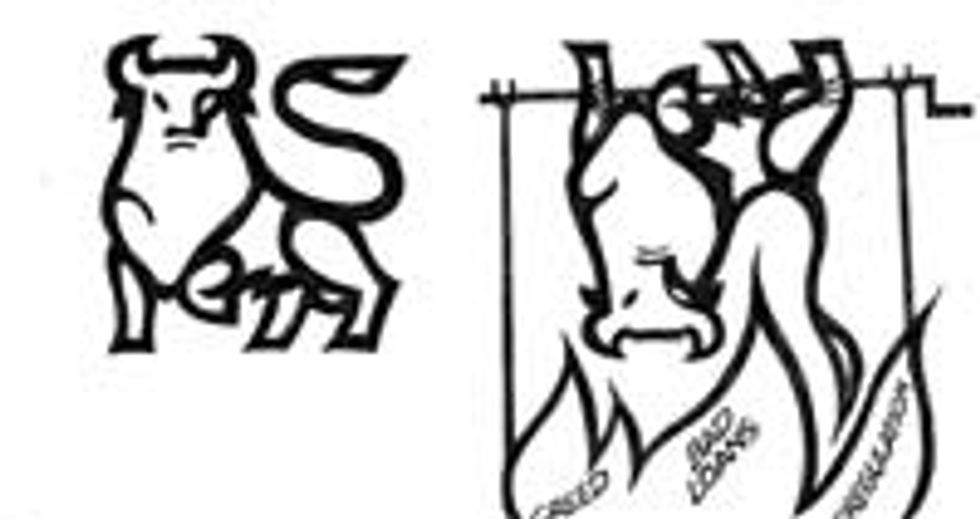 Hey everybody, are you enjoying the total implosion of late-stage capitalism? Are you watching your 401K lose digits by the day? Are you concerned that George W. Bush's drunken meandering bullshit might not actually turn this thing around? Are you wondering, in other words, what the future post-apocalyptic meltdown will look like? Fortunately, there is an entire class of people whose job it is to imagine the most extreme scenarios, and depict them, through art, for us to look at in horror. I'm talking of course about political cartoonists! Join us for a guided tour of the hellscape, after the jump.

The first thing you need to know about the apocalypse is that everyone will be poor, obviously. Even America's most beloved class -- furries -- will be completely broke. Unable to afford food, our majestic cosplayers will end up rooting through dumpsters to search for scraps of rotting but still quasiedible organic material, like this poor aardvark-fellow here. Unfortunately, despite the fact that his fursuit is now encrusted with foul-smelling filth, all he's been able to find is this inspirational sign. Will he be able to derive nutritive value from it? There's only one way to find out!

But the supplies of trash-food will only last for so long! After they run out, we'll be forced to eat the only thing that American companies have actually produced in the last decade: elaborate branding campaigns. Torch-wielding mobs will converge of marketing and advertising firms and smash into their creative vaults, and then corporate mascots both four- and two-legged all over the land will be cooked up for the delight of the hungry masses.

In fact, with all the cannibalism and the terror and the hey hey, there's going to be blood, and lots of it. Just oceans and oceans of it, and your befuddled president can't protect you from it, no matter how high he piles up the sandbags. Blood! Blood I say!

In order to survive in the terrible new post-apocalyptic world, human beings will eventually need to evolve, becoming near-animal creatures themselves to adapt to the savagery. Eventually, the transformation will be almost entirely complete, with only a bit of cosmetics or lovingly preserved clothes from the Before Times remaining to remind us that we once were men and women, with dignity.

In the future, people will still go to college, though! But instead of going off and getting entry-level jobs to help them decide what they want to do with themselves after graduation, they'll be eaten by vultures, the end.